TOKYO -- Japan's decision to extend its state of emergency through the end of this month will knock another 1 to 2 percentage points from economic growth this fiscal year, experts predict, as consumers stuck at home amid the coronavirus pandemic keep their wallets closed.

Yasuhide Yajima of the NLI Research Institute expects 10 trillion yen ($94 billion) in consumer spending to evaporate due to the extension. Many experts see this quarter marking the largest-ever slump in consumption for April through June, breaking the record set in 2014 after a tax hike.

Private-sector economists agree that the prolonged state of emergency will drag down the Japanese economy further in the short term. Projections show real gross domestic product contracting by an additional 6 trillion yen to 11 trillion yen beyond previously forecast levels.

Ryutaro Kono of BNP Paribas expects GDP to plunge 33% on an annualized basis this quarter, 11.3 percentage points more than if the state of emergency had been lifted on Wednesday as originally scheduled. Mitsumaru Kumagai of the Daiwa Institute of Research sees a 5.2-point deterioration to a 21.8% drop.

For the full fiscal year, Kono downgraded his forecast by nearly 1.2 points to a 5.9% contraction. Takahide Kiuchi of the Nomura Research Institute, a former Bank of Japan policy board member, estimates a 2-point drag from the extension. 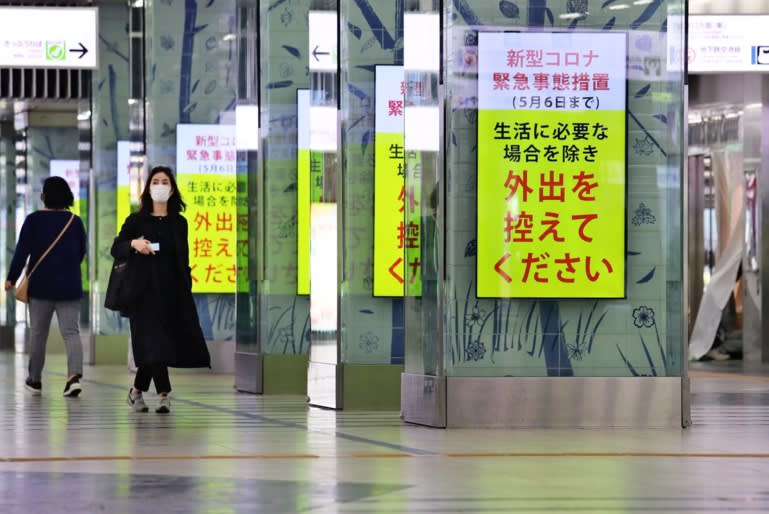 Japanese authorities have urged people to avoid going out unnecessarily to curb the spread of the coronavirus. (Photo by Shinya Sawai)

The extended emergency declaration looks poised to hit capital spending, another pillar of domestic demand, with automakers starting to rethink almost all their spending plans.

"Companies expecting a prolonged decline in consumption will cut back capital investment as much as possible," Kono said.

Businesses with weak finances will find it difficult to stay afloat for another month. "Small and midsize enterprises often have only three months' worth of cash," said NLI Research's Yajima.

The government passed a supplementary fiscal 2020 budget last week with more than 117 trillion yen in stimulus funds. Many are already calling for a second extra budget.

Preventing bankruptcies is a particularly pressing issue. Restaurants and retailers forced to stay closed for long periods of time will have trouble paying rent or tenant fees. The government is considering boosting business subsidies aimed at making up for lost income.

Toshihiro Nagahama of the Dai-ichi Life Research Institute predicts that the extended state of emergency will lead to a total of about 700,000 lost jobs. The government looks to raise the cap on subsidies paid to companies that put workers on paid leave rather than laying them off.

A proposal has also been floated to have furloughed workers treated as unemployed for the purposes of unemployment benefits, a tactic used after the March 2011 earthquake and tsunami.