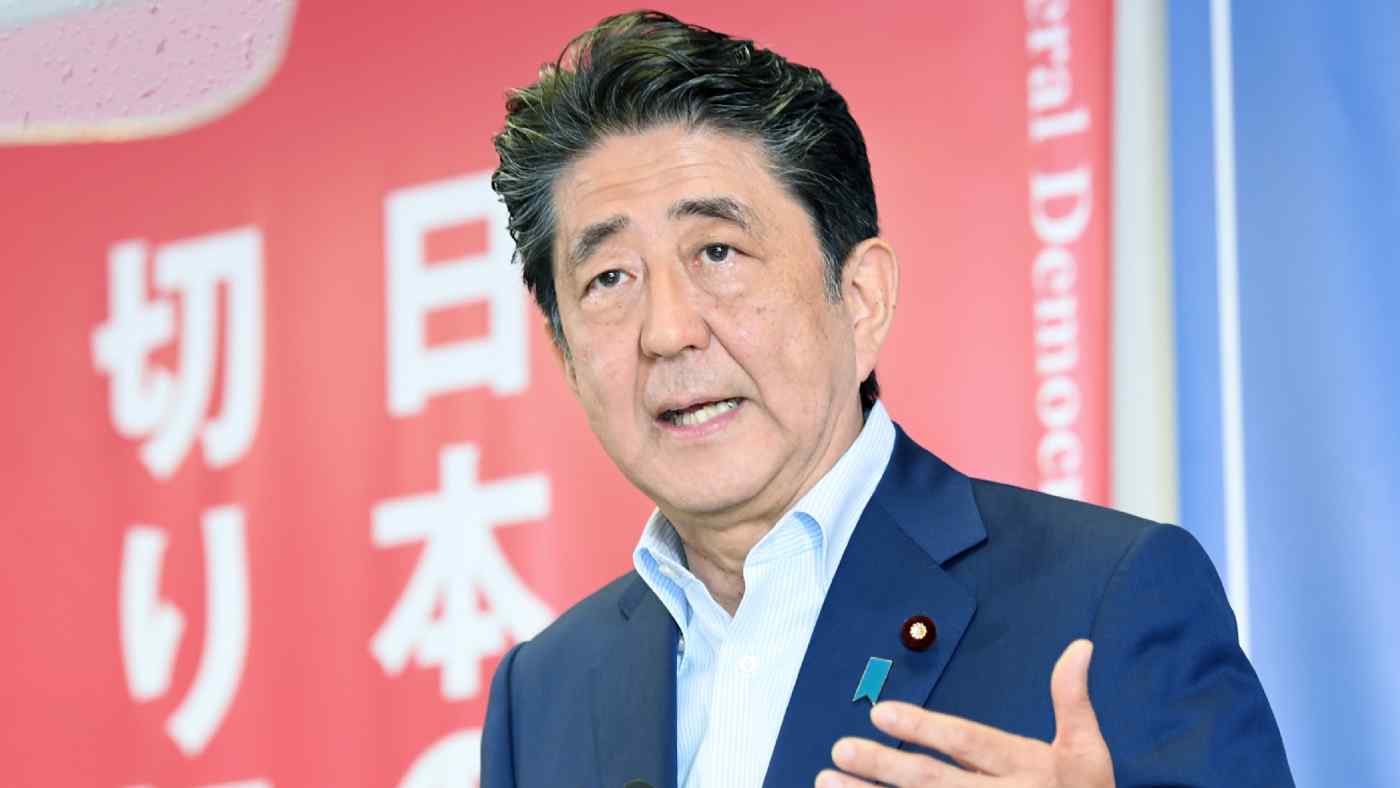 Japanese Prime Minister Shinzo Abe is confident that the higher consumption tax will not be a drag on the economy. (Photo by Toshiki Sasazu)
ERI SUGIURA, Nikkei staff writerJuly 22, 2019 17:32 JST | Japan
CopyCopied

The tax increase was one of the key election issues.

Despite the risk of extending the current period of low inflation, Abe remains committed to a higher tax. "The global economy has downward risks, but we will not hesitate to take fiscal action," he said at a news conference on Monday afternoon.

Abe insisted that measures such as free education and financial assistance to low-income earners will "bolster domestic consumption."

But doubts over the higher tax persist, not only among Japanese economists and scholars who fear it will weigh further on a slowing economy, but also from some in the U.S., who advocate applying the controversial Modern Monetary Theory to cure the country's anemic inflation.

"We do not feel comfortable with a tax increase," said Abe on Sunday night after his coalition was forecast to have won a majority. "But I think it's needed to cover the costs of building a social security system that serves all generations, and to ensure the public's trust in the country."

The coalition feels that raising the tax to 10% from the current 8% is necessary to fund changes to the social security system. All baby boomers will be over the age of 75 by 2025, and the government has been gradually expanding the system to support all generations, including families with small children and low-income households.

This has made the new tax imperative, the government claims, and even the elderly will be asked to pay more into the system than before.

The Cabinet Office approved an economic reform blueprint in June, confirming the higher tax. To soften the blow and help stimulate the economy, the blueprint also calls for raising the minimum hourly wage to 1,000 yen ($9.27) from the current 874 yen at an "early date."

"I think we gained people's understanding of the issue," added Abe.

But the impact of the tax hike on the economy remains uncertain, and numerous experts have already said it may lead to further stagnation. The country is in the middle of an economic downturn, they say, and the tax increase will only worsen low inflation.

Some U.S. scholars agree. "Taxes are for subtraction and to remove spending power from someone," said Stephanie Kelton, a professor of economics and public policy at Stony Brook University. Kelton, a leading MMT advocate, criticized the planned tax increase in a speech given in Tokyo last week. "If you are not currently experiencing an inflation problem -- and you are not -- then [raising] the consumption tax does not make economic sense to me."

MMT encourages government to run a deficit and print money as long as it does not overheat the economy. If inflation begins to emerge, it can be mitigated by cutting government spending and increasing taxes. But other than that, the government should spend on economic stimulus programs to increase employment as much as possible.

The theory has drawn objections from mainstream economists, including U.S. Federal Reserve Chairman Jerome Powell, but is strongly supported by progressive U.S. congresspersons, such as Bernie Sanders and Alexandria Ocasio-Cortez, both Democrats.

Kelton and other MMT advocates believe that Japan proves the theory correct, citing the country's debt-to-gross domestic product ratio at about 240%, but with inflation still well below the Bank of Japan's 2% target.

Japan is expected to have an 897 trillion yen budget deficit by the end of this fiscal year ending March 2020. But Kelton argues that this is not a problem because inflation is not rising in Japan.

As Kelton points out, Japan continues to struggle with low inflation. Earlier this month, the Japan Center for Economic Research announced that the country's economy likely shrank in the second quarter, illustrating the challenge Japan faces in maintaining growth and inflation.

BOJ Gov. Haruhiko Kuroda said at a panel event in New York on Friday that he "cannot agree at all" with MMT. "[The BOJ's] independence has been established and there is no risk of it being damaged," Kuroda said. But he also demonstrated his willingness to ease monetary policy to spark the sluggish economy.

Some Japanese economists share Kelton's view not to increase the tax. In late May, about 20 economists gathered at the lower house in response to a call from former BOJ Deputy Gov. Kikuo Iwata and Satoshi Fujii, a former Cabinet Office adviser, to discuss the downside of a tax hike.

"The reason why we can't escape the deflationary cycle is because consumption remains weak following the last consumption tax increase in fiscal 2014," said Iwata. "If [government] weakens consumption further with another hike in October, it will be impossible to end the deflation cycle," he warned. Iwata added that government should focus on easing fiscal policy to increase demand for workers, which would boost incomes.

Seiji Adachi, head of economic research at Marusan Securities, shares this view. "Further expansion of domestic demand is the key amid global uncertainties," he said. "Raising the consumption tax would mean stepping on the accelerator and the brake at the same time," Adachi claimed, referring to the contradiction of easing monetary policy while forcing fiscal austerity.