Workers stand on the roof of an elevator as a building goes up in Beijing's financial district.   © Reuters
YASUO AWAI, Nikkei staff writerJuly 6, 2017 09:04 JST | China
CopyCopied

HONG KONG -- The Chinese economy likely started slowing again in the second quarter of this year as the government tightened monetary policy slightly, according to a survey of China economists by Nikkei and Nikkei Quick News.

Many of the respondents pointed out that the property market is not rising as strongly as before, and the economic slowdown will likely be more apparent in the second half of this year.

In the survey, the economists on average predicted China's gross domestic product probably grew by 6.8% in the second quarter from a year before, easing slightly from the 6.9% in the first quarter. The official figures are due out on July 17. The economists on average expect China's annual GDP to grow 6.6% this year, in line with the government's target of around 6.5%. But they also expect the economy to start showing signs of a slowdown in the latter half of the year. "We expect steady economic growth in the first half of 2017, both directly via infrastructure and indirectly through positive spill-overs to related manufacturing industries, supported by government stimulus," said Shen Jianguang of Mizuho Securities Asia. In the second half, he added, "the downward pressure on the economy will become stronger due to the higher base in 2016 and tightening monetary policy."

Asked to rate how frothy China's property market is on a scale of 10 -- with 10 indicating overheating -- the economists gave an average of 6.6, down from the 7.3 in the previous survey. Ken Chen of KGI Asia said that as a result of monetary tightening the property bubble has somewhat abated. Julius Baer's Susan Joho noted that although property prices are still high, "measures helped to cool the market and inventories are being worked off slowly but continuously."

Among things cited by the economists as risks that could drag down the economy, monetary tightening came out on top for the first time, beating out a possible fall in property prices. The People's Bank of China, the central bank, has been guiding its short-term rates higher and the banking regulator has tightened its grip on the country's shadow banking, such as wealth management products, which are used as alternatives to traditional financial products. "The deleveraging campaign also bears risks for upsetting the real economy if it starts to exert excessive pressure on banks and shadow banking entities, curtailing credit intermediation," said Axa Investment Managers Asia's Aidan Yao.

Still, many, including Kenny Wen of Sun Hung Kai Financial, believe the central government will adjust its policies to what is going on in the economy as the Communist Party awaits a key congress this fall where the party's new top officials will be decided. Most of the economists predicted that the PBOC will keep its current policy rates and reserve rates unchanged and use open market operations and other tools to adjust short-term rates.

As for exchange rates, the economists largely expected the yuan to depreciate by 0.5% annually to levels past 6.98 yuan to the dollar at the end of 2017. The yuan continues to be under pressure from a stronger dollar, buoyed by the U.S. Federal Reserve hiking rates. But Beijing, wary of U.S. President Donald Trump's responses, is expected to work toward stabilizing the yuan.

In China, the "control over capital flows has tightened, the level of the exchange rate is largely a policy decision," said Richard Jerram of the Bank of Singapore. For China, "forex stability vs. the dollar seems to be diplomatic, as a means of trying to limit trade friction with the protectionist-minded U.S. government," he added. 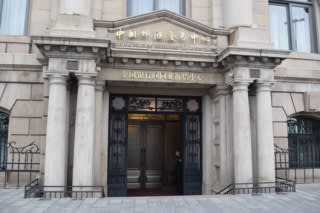 The PBOC has changed the way it calculates the benchmark dollar-yuan exchange rate so as to reduce volatility in the rate. But the economists were divided on how much the change would affect the currency's internationalization. Xia Le of BBVA Research described it as a "re-peg" of the currency to the dollar. "It will slow down the financial liberalization process and be a drag on yuan internationalization," he said. By contrast, Liao Qun of China Citic Bank, among others, thinks a stable exchange rate will be a plus, saying, "Yuan internationalization can only go ahead smoothly with a stable and strong yuan."

As for China's expanding trade surplus with the U.S., the economists largely expected no major change in bilateral trade relations in the foreseeable future, although a slightly smaller number of respondents said there will be friction in some areas.

Sean Taylor of Deutsche Asset Management pointed out that since the U.S.-China summit in April, China has opened up its financial sector to U.S. companies, and the trade friction between the two countries has lessened over the short term. Ricky Choi of the Bank of China (Hong Kong) said, "While the two sides are scheduling to discuss a one-year plan to further solidify actions in promoting economic cooperation, the trade relations between China and the U.S. are expected to improve."

Although Trump hopes to seek China's cooperation in dealing with North Korea, "this seems unlikely," said the Bank of Singapore's Jerram. "So there is the risk that protectionism will become more aggressive," he said.

Economists responding to this survey, in alphabetical order by company: