Singapore's PSA in the running as it seeks overseas growth SUEZ, Egypt/SINGAPORE -- Egyptian authorities are seeking Asian investment for a new cargo terminal at Port Said at the Mediterranean end of the Suez Canal. They have been in talks with Singapore's PSA, but are considering possible offers from COSCO Shipping Ports, among others.

"We are awaiting a final masterplan of a new pier at East Port Said Port from Singapore's PSA," Suez Canal Authority Chairman Mohab Mamish told reporters in Suez on March 16. "The General Authority for Suez Canal Economic Zone is currently handling the negotiations efficiently with PSA." 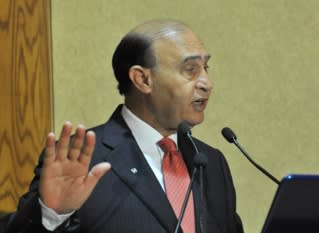 Mohamed Youssef, head of Egypt's Holding Co. for Maritime and Land Transport, said the talks with PSA International "are on track," dismissing media reports of a breakdown in negotiations. "PSA International is conducting technical, commercial and economic feasibility studies," he said.

Analysts say a depreciated currency bodes well for Egypt's investment climate in general. The new cargo terminal was estimated to cost 6 billion Egyptian pounds before the government floated the currency in November, equivalent to $675 million then, in a move to placate the International Monetary Fund from whom it was seeking a $12 billion three-year loan.

Since the currency float, the greenback has surged from 8.88 pounds to above 18 pounds and consequently, the cost of the cargo terminal has now more than halved to $330.7 million.

In 2016, Ahmed Darwish, Chairman of GASCEZ, and Wan Chee Foong, head of business development at PSA International, held a number of meetings to this end. Egyptian officials said the planned 2,000 sq. m. cargo terminal would have a 20-meter draft.

In November 2015, SCA and PSA signed a memorandum of understanding to conduct a study on the construction and management of a cargo terminal at East Port Said Port, as part of Egypt's ambitious Suez Canal redevelopment.

A PSA International spokesperson made it clear that his company "is keen to explore port development opportunities in Egypt" and discussions are "ongoing." When contacted by Nikkei Asian Review, the spokesperson said that there is "no change" in its current position.

To Singapore government-owned PSA, the expansion of its global port network has been a core growth strategy since its maiden overseas foray into Dalian, China, in 1996. Today it has stakes in around 40 terminals in 16 countries.

One analyst ascribed the slump to poor infrastructure, saying that drafts at many of the country's seaports were not deep enough.

Ahmed Hanafy, an adviser to Arab Academy for Science, Technology and Maritime Transport, criticized the authorities for the delay in reaching an agreement with a developer for the planned 5-km pier at East Port Said Port.

"New cargo terminals will be of great potential at East Port Said Port. This will be economically feasible," said Hanafy. "The operator relies on specific maritime services for Maersk Line," referring to the Danish shipping line.

Hanafy urged Egyptian authorities to speed up the talks and work harder to attract new shipping companies to make up for losses incurred after service fees were tripled in December. That had led to global carriers rerouting through Greece and Cyprus.

An alliance of K Line, Yang Ming and Evergreen Line, too, will relocate its regional transshipment hub from Port Said to Greece's Piraeus Port next month, according to Mohamed Abu Hashish, a representative of K Line in Egypt.

For PSA, the Suez project offers much-needed growth. Annual container throughput at PSA's terminals in Singapore declined in 2015 and 2016, largely due to slowing sea trade.

Png says, however, that the Suez project faces geopolitical and security risks, as well as the prospect of losing market share to Panama Canal, which links the Atlantic and the Pacific Oceans and forms a major international trade route.

"PSA is believed to be valuing these issues before coming to the final decision," she said.

The Middle East is a relatively underdeveloped market for PSA. The company operates Dammam Port on Saudi Arabia's Persian Gulf coast in a joint venture with Saudi's Public Investment Fund. The first phase started commercial operation in April 2015, and further development is ongoing. PSA also operates Mersin International Port on the Mediterranean in Turkey as a joint venture with Akfen Holdings, a Turkish infrastructure investments company.

Egypt should bank on the maritime transport industry, experts say, citing success stories in Dubai, Singapore and Hong Kong. The country's share in world maritime transport is estimated at less than 1% despite its shores spanning more than 2,750 km.