MANILA -- Economic growth in Asia's developing economies will fall to its slowest pace in nearly two decades in 2019, as headwinds from the U.S.-China trade war continue to weigh on the region.

The Asian Development Bank said on Wednesday that it expects the region's developing economies to grow 5.7% this year, the slowest since the 4.9% expansion recorded in 2001. Growth is forecast to further decelerate next year to 5.6%.

The forecasts in the bank's Asian Development Outlook report are slightly lower from its December projections, which saw the region expanding 5.8% this year.

"A drawn-out or deteriorating trade conflict between the People's Republic of China and the United States could undermine investment and growth in developing Asia," ADB chief economist Yasuyuki Sawada said.

The bank warned that risks to the region's outlook remain tilted to the downside, primarily because of the trade war. 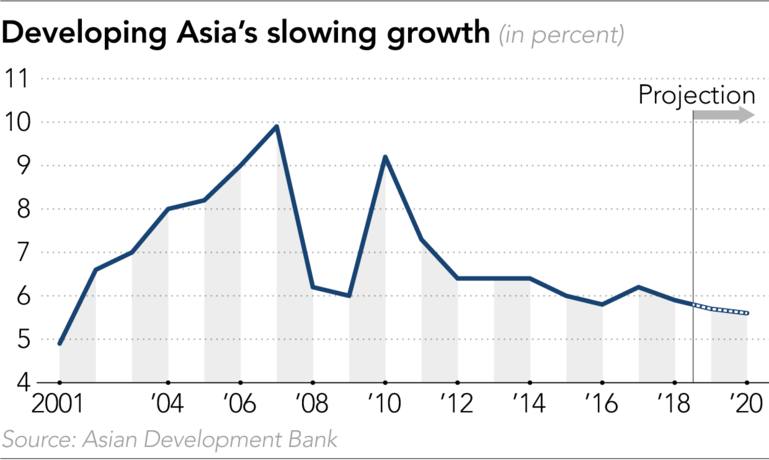 "Uncertainty is heightened by protracted negotiations and disagreements, which could curtail investment and growth in the region," the report said. Trade risks could be tilted to the upside if negotiations reach a deal and trade barriers are lowered, it said.

The U.S. and China are scheduled to resume trade negotiations on Wednesday in Washington after talks in Beijing last week failed to address how to eliminate additional tariffs imposed on goods produced by the world's two largest economies. China wants to remove additional tariffs imposed by the U.S. after both sides reach a deal, while President Donald Trump has indicated he wants the duties kept for a "substantial period of time."

Economic growth in China, Asia's largest economy, could further weaken this year and next as the trade war with the U.S. continues to dampen exports. A crackdown on shadow banking and restrictions on the housing market will likewise hinder China's growth prospects, the report said.

China's economic growth has been slowing since 2013 as the country shifts from an export-driven economy to a consumption-led one.

India, Asia's second-largest developing economy, is expected to see growth rebound to 7.2% in 2019 and 7.3% next year -- from 7% last year -- as rate cuts by the central bank and income support to farmers bolster domestic consumption.

The ADB's forecast for India this year, however, was cut by 0.4 percentage point from its December projections. Reforms in the banking sector and value-added taxes are also likely to make local companies more competitive, it said. 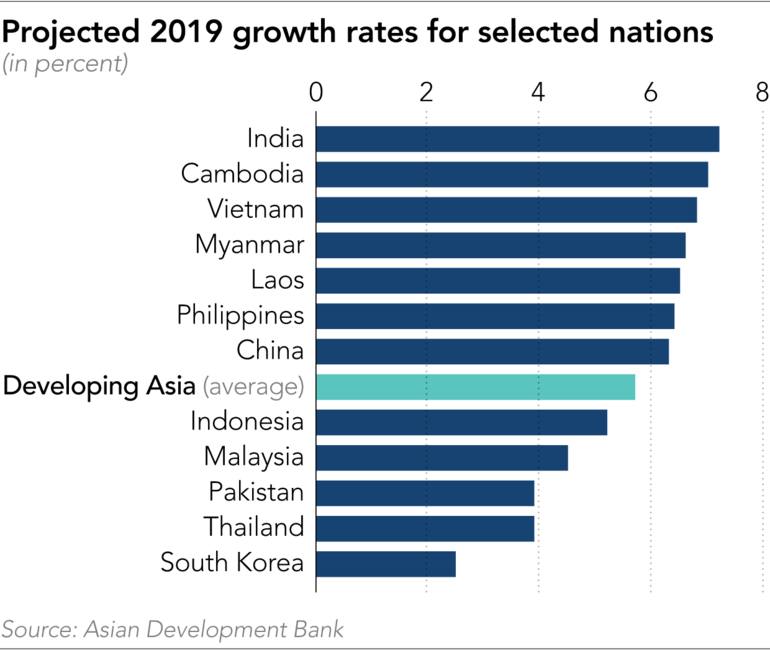 In Pacific countries, growth is expected to rebound this year as Papua New Guinea, the region's dominant economy, is set to return to liquefied natural gas production after a major earthquake last year.

Central Asia is set for slower growth in 2019 and 2020 as slowdowns in Kazakhstan and Turkmenistan would more than offset higher growth elsewhere, the ADB said. "Lower oil prices and slower growth in the Russian Federation will weigh on economies in Central Asia," it said.

Beyond the trade war, a disorderly exit of the U.K. from the European Union and fiscal policy uncertainty in the U.S. are also key risks to the region's economic outlook. Threats of financial volatility still persist even as risks from abrupt policy hikes by the U.S. Federal Reserve have subsided.