MANILA -- The developing economies in Asia are expected to shrink by 0.7% this year due to the COVID-19 pandemic, marking the first regional recession in nearly six decades, the Asian Development Bank said Tuesday.

The latest projection highlights how the regional outlook has quickly deteriorated after many governments imposed lockdowns to prevent the spread of coronavirus, suppressing business and trade as a result.

ADB, headquartered in Manila, slashed the regional growth outlook to 2.2% in April before cutting it further to 0.1% in June. Prior to the pandemic, the regional economy was one of the most vibrant in the world, growing by 5.1% last year. ADB expects the region to recover next year with a 6.8% expansion.

"Most economies in the Asia and Pacific region can expect a difficult growth path for the rest of 2020," said ADB Chief Economist Yasuyuki Sawada as the bank released an update to its widely followed publication Asian Development Outlook. 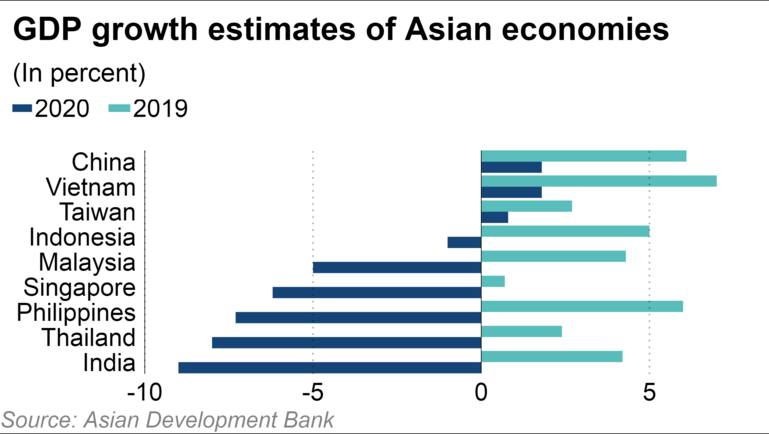 China is among the 12 out of 46 developing Asian economies that look likely to dodge negative growth in 2020.

China, where the coronavirus outbreak was first reported, is projected to grow 1.8% this year, down sharply from 6.1% last year. The region's largest economy is set for a 7.7% rebound next year, according to ADB.

Meanwhile, India, the region's second-largest economy still grappling with surging daily coronavirus infections, will likely contract by 9.0% this year, before growing by 8.0% in 2021.

Hong Kong, which was rocked by anti-government protests due to China's passage of a contentious national security law, is expected to shrink by 6.5% before recovering with a 5.1% expansion next year. Southeast Asia, where some of the most brutal economic contractions were reported in the second quarter, will likely shrink 3.8% this year, before growing by 5.5% next year. It grew 4.4% last year.

Central Asia will likely contract by 2.1% this year before growing by 3.9% next year. Meanwhile, the Pacific subregion, where many rely on the tourism sector, is set for 6.1% contraction before growing by 1.3% in 2021.

With regard to Asia's current economic conditions, Nobel Prize-winning economist Joseph Stiglitz told reporters in Hong Kong on Tuesday that a number of developing countries were facing major challenges even before the pandemic. "The basic model that worked so well in East Asia... is coming to an end," the Columbia University professor said via teleconference from the U.S., referring to growth led by labor-intensive manufacturing.

"They need to find another growth model," Stiglitz added, given that such a system is now outdated mostly due to increased productivity and changes in technology. "The 21st century is about [the] service sector economy," which includes sectors such as education, health and the green economy that are "particularly important," he said.

Regarding China, Stiglitz expressed some reservations. "If you look at the numbers, it appears as if China is having a strong recovery," he said, but cautioned that "those numbers are not enough to fuel global recovery."

He stressed that how the country drives its recovery is at least as important as the rate of expansion. "There are some signals that China is moving toward import substitution policy to stimulate its own economy," he said, stressing that even if a certain level of growth is achieved, that may not benefit the rest of the world as much.