Executives race for huge pay packages in China, other countries 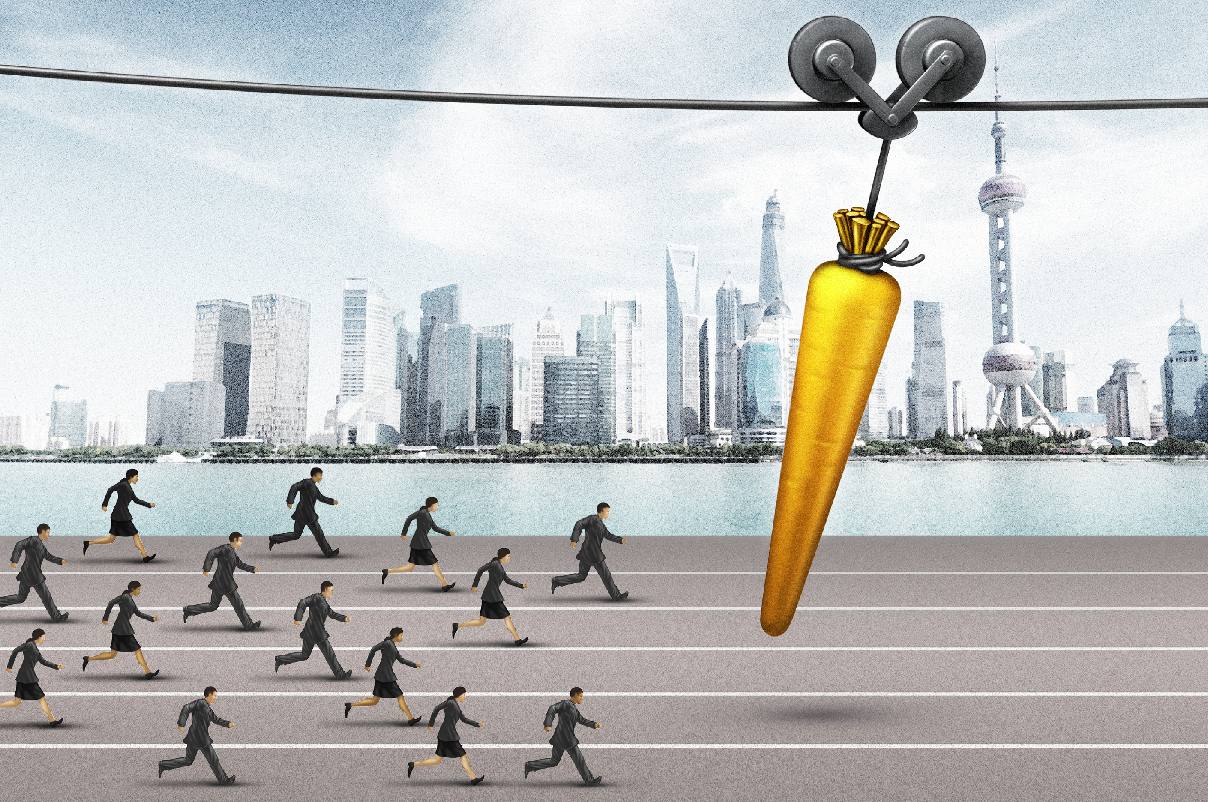 TOKYO -- Top corporate executives looking to cash in on their expertise may find the grass greener in China or Vietnam rather than Japan or Germany.

This is part of a trend in emerging Asian economies, which are luring experienced executives with higher pay packages compared to some advanced economies.

In Japan, the average board compensation is $237,513 -- more than Thailand's $211,451, but still relatively meager compared to those of its major economic rivals.

The generous sums China pays, based on going rates in the country's main business hub of Shanghai, show that the country is more like the U.S. than its Asian peers when it comes to welcoming managerial talent. Maybe little wonder the country has the region's most vibrant economy.

The pay ranking goes the opposite way as one descends the corporate ladder, according to Mercer's survey, which covers some 25,000 companies in 125 countries for fiscal 2016. 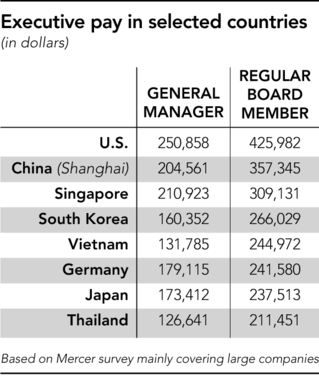 Further down at the section-chief level, the pay scale reverses completely. Annual compensation is highest in Japan at $89,467, compared to $88,182 in Singapore and $58,427 in China.

According to the latest survey by the Japan External Trade Organization, the average monthly salary for a typical factory worker in Tokyo stands at $2,339, compared to $558 in Shanghai and $214 in Ho Chi Minh City.

The data revealed that the pay structure in China and Vietnam is more like the winner-take-all practice in the U.S., while Japan and Germany have a much flatter pay scale -- seen in the past as conducive to fostering teamwork and organizational cohesiveness.

In an age of disruptive technologies and rapidly shifting business environments, however, the bloat at the top is deemed necessary, with a greater premium placed on managerial skills. And it is clear which country is winning the battle for luring managerial talent.

Better pay was one of the reasons for the former manager's decision to jump ship, where he expects his level of compensation to remain even after he turns 60 -- something unusual at Japanese companies, where salaries are automatically trimmed once an employee reaches 60, no matter the job duties or skill level.

A former employee of a major Japanese electronics maker recounted a similar story. "Some Japanese have seen their annual pay rise to 20 million yen ($182,000) to 30 million yen after finding a job overseas," he said. "Sometimes, their salaries even triple," he added. The man himself left Japan for a position with a Shanghai-based semiconductor device maker.

However, some Japanese find that working for companies dangling huge compensation packages is not all that great. After gleaning all they can from their high-priced haul, some companies may unceremoniously dump their catch a short time later.

Still, it is clear which pay scale prevails in Asia. According to British recruiting company Hays, a growing number of people are citing money as a main reason for changing jobs.

Take the example of one 30-something working for an artificial intelligence startup in Taiwan. He pulls down more than 10 million yen annually -- at least 50% more than what Japanese e-commerce giant Rakuten paid him three years ago.

And the Japanese transplant seems satisfied with his choice. "Employees here have more say in their work [than in Japan]," he said. "They are compensated based on their contribution to the company."