GUANGZHOU, China -- Economic and political uncertainties are hurting new-car sales in emerging economies. This is putting pressure on global automakers that have pinned their growth hopes on these markets.

The number of new cars sold worldwide is likely to grow only about 2% this year. That would be equivalent to half the growth achieved in 2013 and the lowest level since 2009, right after the worldwide financial crisis.

In China, which accounts for a quarter of the global market, new-car sales have been weak since August as the country's economic slowdown worsened. October was the second straight month in which unit sales increased around 2%; annual growth is projected at about 5%.

Brazil, the world's fourth-largest car market, saw January-October sales sink 9% on the year. The nation's economy has been sluggish, and banks there tightened up on car loans amid rising interest rates.

The sixth-largest market, India, suffered a 7% year-on-year contraction in October, recording negative growth for the first time in five months.

Elsewhere, political turmoil has taken a toll. Russia, hurt by sanctions over the Ukraine crisis, saw vehicle sales drop 13% on the year in the January-October period. And Thai sales plummeted 37% in the January-September term, partly due to the military coup there.

Indonesian sales, which grew 10% in 2013, fell for the second straight month in October. New President Joko Widodo in November announced a large hike in fuel prices, adding to concerns about auto sales. 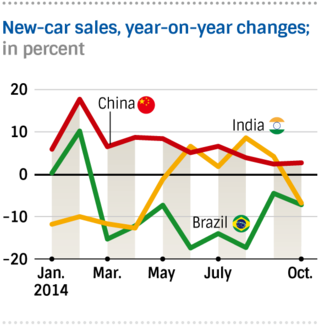 Developed countries are doing better. In the U.S., October sales hit a 10-year high, gaining 6.1% on the year. The full-year result could approach an eight-year high at over 16 million units. Even in Europe, where the economy is limping, annual sales are likely to pick up for the first time in three years.

Japanese automakers have performed well under these conditions. Toyota Motor has made up for weak sales in Japan and Thailand with a strong showing in North America, bolstered by the weak yen. It booked a record net profit in the fiscal first half.

German manufacturers with strong luxury car segments, such as Volkswagen and BMW, have also been expanding their profits.

But Chinese sales for Volkswagen and U.S. giant General Motors have plunged. Nissan Motor also downgraded unit sales there by around 10% from initial projections and now sees only a slight increase on the year. Mitsubishi Motors lowered its sales target in Asia by 13%, while Honda Motor plans to push back the launch of its newest Thai plant by at least six months.

The prevailing view is that emerging economies, by dint of their burgeoning populations, will continue driving the global market. "Growth will slow, but we can expect Chinese sales to climb by over 1 million units every year," said Naotaka Sonoda at Sumitomo Mitsui Banking.

Still, the fate of automakers may be determined by political and economic trends in promising countries -- and the steps the companies take to fine-tune their product lineups, production systems and sales strategies.