BEIJING -- China's economic data for October was a mixed bag, but on the whole the figures paint a picture of resilience. That could change next year, economists warn.

The world's No. 2 economy in October "maintained the momentum of moderate but stable development with quality improved," Mao Shengyong, a spokesman for the National Bureau of Statistics, told reporters on Monday.

But while most experts agree the economy is holding up for now, they say it will become increasingly difficult for the country to withstand downward pressure in 2017. In various indicators, economists see cause for concern.

Retail sales, for instance, grew 10% on the year in October. Yet the market had expected the figure to match the 10.7% rise seen in September.

Auto sales, which have been driving Chinese consumption growth, increased 8.7% on the year, well short of the 13.1% increase for September. Toru Nishihama, chief economist at Dai-ichi Life Research Institute, suggested the slower pace was likely a correction from the surge triggered by tax breaks on small cars last year. Still, he said, overall retail sales were weaker than anticipated. 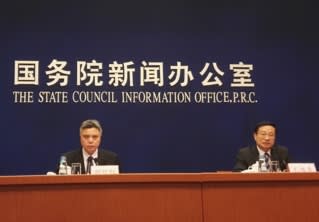 Meanwhile, fixed asset investment in the January-October period increased 8.3% on the year, to 48.4 trillion yuan ($7 trillion). The rate of increase for the first 10 months was 0.1 of a percentage point higher than that for the first nine.

Real estate investment for January through October rose 6.6% on the year, up 0.8 of a point from the first nine months, although new curbs were imposed at the beginning of the month to cool urban property markets.

The 6.1% rise in October's industrial production, unchanged from September, was below market expectations.

"The headline figures for industry are often too stable to tell us a great deal," noted Julian Evans-Pritchard, an economist at Capital Economics. He said the same applies to the official gross domestic product figures.

All told, though, economists like Evans-Pritchard see trouble ahead. "With credit growth now slowing and the property market beginning to cool," he added, "the drivers of the recent recovery look set to fizzle out early next year."