Jokowi vows to improve investment environment in his second term

JAKARTA -- Some countries in Southeast Asia are benefiting from the U.S.-China trade war, as nervous manufacturers build new factories or increase production outside China, but Indonesia isn't one.

With foreign direct investment still sluggish, reforms aimed at pulling in such investment will be a major challenge for Indonesian President Joko "Jokowi" Widodo.

Indonesia's FDI grew a modest 4%, year on year, in the first half of 2019, with potential investors turned off by opaque regulation and soaring labor costs. Widodo, on Sept. 4, ordered economic ministers to list regulations that discourage foreign investment, and to make procedures as simple as possible.

Since he took office in 2014, Widodo, who once ran a furniture-making business before becoming governor of Jakarta, has tried to make things easier by cutting red tape, including approvals and licensing requirements. Bureaucratic streamlining has been a hallmark of his tenure so far.

That has helped Indonesia move up the table in business rankings. In 2014, the country sat in 120th spot in the World Bank's ease of doing business survey. This year's edition of the report put Indonesia at 73rd.

But foreign direct investment has lagged, although it has shown signs of picking up since Widodo was elected to a second term in April. His administration fears that companies may be bypassing Indonesia and setting up shop elsewhere in Southeast Asia. 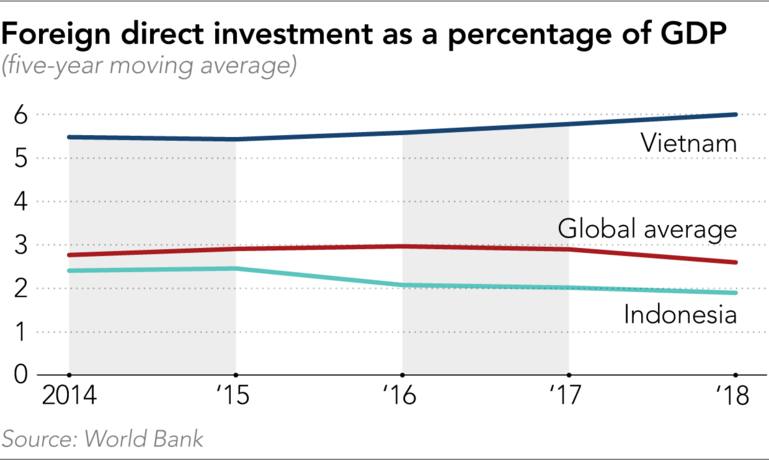 According to a separate World Bank survey of 33 companies that have shifted production from China since the trade spat began, 23 have moved to Vietnam with the rest relocating to Malaysia, Thailand and Cambodia. None chose Indonesia despite it being Southeast Asia's largest economy.

And getting started in Indonesia is no mean feat. Licensing and approvals are time-consuming because regulatory authority is split between central and local governments. In addition, the minimum wage has risen by nearly 8% annually in recent years, pushing up labor costs.

The barriers to foreign direct investment in Indonesia are borne out by the numbers: FDI was equal to just 1.9% of the country's gross domestic product in 2018, a lower share than the global average or regional rivals Vietnam and Malaysia.

Club members urged the government to draw up consistent policies and to make the tax system transparent. Tax rules are so murky that those who administer it "say different things," according to one Japanese business representative.

In 2016, there were 12,852 separate disputes between tax authorities and companies in Indonesia, compared with just 245 in Japan. Companies often clash with tax authorities, making it difficult for businesses to formulate long-term plans.

Widodo told Nikkei in late June that he would listen to investors and come up with measures to draw investment to Indonesia. He hinted at revising the country's labor law, which has been criticized by international companies as being too rigid to respond to changes in the economic environment.

Widodo has made a show of openness, but unless more reforms are in the offing, investors will continue to shun Indonesia. To make it more attractive he will have to make painful decisions, such as loosening rules aimed at protecting workers, cutting regulations, streamlining approvals and introducing a more transparent tax system.