Indonesia and Philippines try to defend currencies amid fresh pressure The Indonesian rupiah has lost 9% of its value against the dollar since the start of the year.   © Reuters
SHOTARO TANI and MIKHAIL FLORES, Nikkei staff writersSeptember 27, 2018 18:35 JST | Southeast Asia
CopyCopied

JAKARTA/MANILA -- Central banks in developing Asia have been forced into another round of monetary tightening to offset renewed currency depreciation and inflationary pressures.

This is the fifth time in six meetings since May that the Indonesian central bank has raised its rates, while the latest hike for the Philippine central bank means its benchmark rate is at its highest since March 2009.

Both moves came amid heightened pressure on the countries' currencies and inflation prospects, as the U.S. Federal Reserve raised its benchmark Federal Funds rate for the third time this year a day earlier. The Fed hiked its rates by 25 basis points to 2-2.25%, which is likely to translate to a stronger dollar and weaker Asian currencies. The escalating trade war between the U.S. and China has also weighed on investor sentiment.

For Bank Indonesia, whose primary concern is to achieve and maintain the stability of the rupiah, a further fall in the currency could not be tolerated. Despite government measures to reduce the country’s current-account deficit by stimulating exports and cutting imports, the currency has already lost 9% of its value against the dollar since the start of the year, with investors selling off rupiah assets as crises in other emerging markets sparked fears of contagion.

The rupiah momentarily hit 15,016 to the dollar in early September, the lowest level since the Asian financial crisis in 1998. 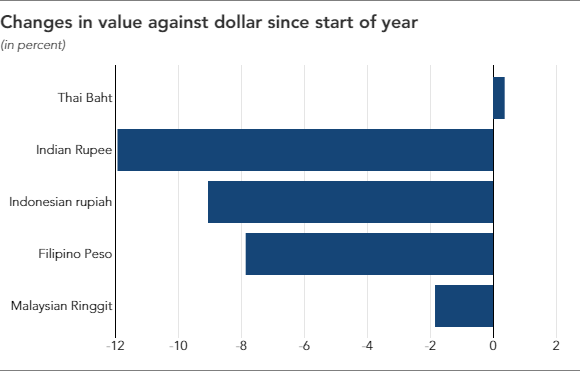 "[Our] stance remains hawkish, pre-emptive and ahead of curve," said Bank Indonesia Gov. Perry Warjiyo. But he also added "How our policy will be in next month or after? It will be very data dependent."

The rupiah came under renewed pressure in mid-September when the country recorded a $1.02 billion trade deficit for August, larger than the market expected.

The rupiah’s slide against the dollar is problematic for Indonesia, as its companies are burdened with sizable debts denominated in the U.S. currency.

Outstanding dollar denominated debt -- a combination of bank loans and bond issuance -- held by Indonesian corporations excluding financial services stands at $106 billion in 2018, 12% higher than last year, according to data from Dealogic. A cumulative $21 billion worth in dollar debt is set to reach maturity from Sept. 28 to the end of 2020.

For companies with dollar debt but earning the bulk of their income in rupiah, a further slide in the currency would mean an increased repayment burden.

Another fall in the currency also risks driving up import costs and putting upward pressure on headline inflation down the road, an unappealing prospect for President Joko Widodo, who is running for a second term next year.

This is something the Philippines has not been so lucky with. Inflation in the country hit 6.4% in August, the highest rate in almost a decade, as food and oil prices soared.

The slide in the peso, which has fallen nearly 8% against the dollar since the start of the year, has exacerbated inflationary pressures. The currency sank to a 13-year low against the greenback of 54.33 on Sept. 26, a day before the BSP hiked rates.

President Rodrigo Duterte's "Build, Build, Build" infrastructure program and the growing domestic economy has widened the country's trade deficit to $22.49 billion, 72% higher on the year, and led to the peso's depreciation. The currency has continued to trade near the historical low after the U.S. rate hike.

A series of rate hikes this year "was warranted amid persistent signs of broadening price pressures," BPS Deputy Gov. Chuchi Fonacier said at a news conference. The BSP has cumulatively raised interest rates by 150 basis points this year, after nearly four years of keeping a steady policy hand.

Still, the BSP expects inflation to exceed its 2% to 4% target range this year and in 2019.

Prices could remain elevated in the wake of Typhoon Mangkhut, which earlier in September pummeled the country's northern regions and damaged an estimated 27 billion pesos ($497 million) worth of agricultural goods. Fuel prices in parts of India have hit record highs due to rising crude prices and a weakening rupee.   © Reuters

Pressure on domestic currencies from monetary tightening in the U.S. is also a cause for concern for other central banks in Asia.

The Hong Kong Monetary Authority raised its base rate by 25 basis points on Sept. 27 to 2.5% to track the move in the U.S., as the currency is pegged to the greenback. This was done despite officials in Hong Kong warning of the impact of rising interest rates on the territory's homeowners.

Major banks in Hong Kong like HSBC, Standard Chartered and Hang Seng Bank all raised their prime lending rate for the first time in 12 years on Sept. 27, hours after the monetary authority's rate hike.

In India, "market expectations of rate hikes in October and December policy meetings have increased substantially in the last few days," wrote Rohit Garg, Emerging Asia FI/FX strategist at Bank of America Merrill Lynch in a report, given further weakening in the Indian rupee. The currency has fallen nearly 12% since the start of the year, and is one of the worst performing currencies in the region.

"A recent Reserve Bank of India study suggests that 1% depreciation leads to 15 basis point inflation over a period of 12 months... A mere 25 basis point increase in policy rate is unlikely to move the needle on the rupee. However, a 50 basis point hike will be positive for the rupee."

Bank of Korea Gov. Lee Ju-yeol also voiced concern about the widening rate gap with the U.S. While the Fed bumped up its key rate by a quarter of a percentage point, to a range of 2% to 2.25%, the BOK has kept its benchmark at 1.5% for the last 10 months.

"The gap in the policy rate expanded to 75 basis points, and the U.S. plans to raise it further," Lee told reporters on Sept. 27. "I think we need to watch capital flows and the interest gap more carefully."