SINGAPORE -- Leaders from 16 Asia-Pacific countries are set to meet in Singapore to seek what they call a "substantial conclusion" on the Regional Comprehensive Economic Partnership, a proposed free trade agreement that would link the region's two biggest economies -- China and Japan -- with fast-growing India and Vietnam.

Negotiations began in 2013, but talks accelerated this year in response to U.S. President Donald Trump's protectionist policies. With the world watching for the results of the meetings, here are five things to know about the deal referred to as RCEP.

What is RCEP, and how is it different from the TPP?

RCEP is a multilateral free trade framework like the Trans-Pacific Partnership, which the Trump administration abandoned. But RCEP is bigger, spanning China, Japan, India, South Korea, Australia, New Zealand and the 10 members of the Association of Southeast Asian Nations.

The 16 countries together make up nearly 50% of the world's population and about 30% of global gross domestic product. Seven of these countries -- Singapore, Malaysia, Vietnam, Brunei, Japan, Australia and New Zealand -- also are part of the 11-nation Comprehensive and Progressive Trans-Pacific Partnership, the so-called TPP-11 slated to take effect on Dec. 30.

RCEP differs from other multilateral trade deals in part by comprising Asia-Pacific countries only. It goes less far than the TPP-11 in freeing up trade and setting ground rules in areas like intellectual property, the environment and state-owned enterprises.

How would the deal affect global trade?

"India and China are not connected by an FTA, so this is one opportunity to join the two very large Asian economies in a common set of rules," said Locknie Hsu, a professor of law at Singapore Management University.

The agreement is expected to encourage more trade, cross-border investment and the flow of talent within Asia.

Given the pushback against globalization from the U.S. and other countries, finalizing RCEP would be "an additional signal, by this very large regional group, of a commitment to carry on trading, liberalizing and investing," Hsu said. 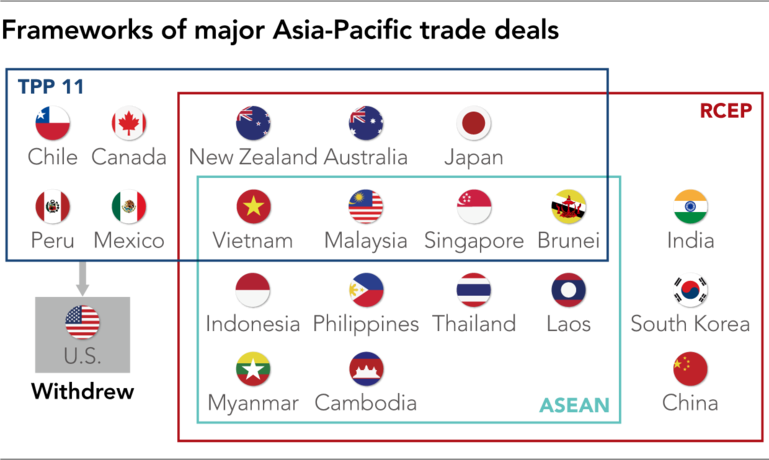 Why are members so eager to conclude the agreement now?

The disparate levels of economic development and differing interests among the countries have made negotiations difficult. But Trump's unilateral moves on trade and escalating tensions with China gave new impetus to RCEP. Trade-dependent Singapore, which serves as ASEAN chair this year, is especially keen to bring the talks to fruition.

Some members face the prospect of national elections next year, including Indonesia, India and Thailand. Political decisions involving sensitive issues like trade in farm products may be put on hold as the votes draw near, making this year potentially the last opportunity for a while to conclude the agreement.

What are the sticking points?

Among 18 chapters being negotiated, only five have been closed. Market access, including the removal of tariffs, remains the thorniest issue, especially for developing economies.

India is seen as reluctant to open its markets too wide. The nation's agricultural sector contributes about 15% of GDP and occupies 43% of workers, World Bank data from 2017 shows. Lowering tariffs or investment barriers may harm domestic industries and hurt Prime Minister Narendra Modi's government ahead of a general election.

RCEP also is sensitive for India given the country's large and growing trade deficit with China. Many think this imbalance will worsen if the trade deal takes effect.

However, New Delhi does want its peers to open their labor markets, because India offers a huge pool of information technology talent.

E-commerce represents another difficult negotiation chapter, as it involves the handling of data across borders.

Is a conclusion likely this year?

Past negotiation rounds suggest an agreement remains distant. What qualifies as a "substantial conclusion" is unclear, and some observers suspect that any progress toward a final deal could be hailed as achieving the goal.

But skepticism exists over the possibility of even reaching that point.

"It is unlikely that RCEP will come to substantial conclusion at the summit this year," an ASEAN source told the Nikkei Asian Review, citing slow progress. "At the summit, leaders will likely take stock of negotiations so far and make another push to give direction for next year."

Negotiators will hold last-minute discussions this weekend, leaving difficult issues that require political decisions to a ministerial meeting on Monday, which will be followed by the RCEP summit on Wednesday.

Members target next year for reaching the final conclusion of RCEP, according to the draft joint statement for Wednesday's summit obtained by Nikkei.