NEW DELHI/MUMBAI -- With India's biggest festival, Diwali, just two weeks away, it is raining discounts across the country's e-commerce platforms. Homegrown Flipkart and global giant Amazon, two of the leaders, say they are ringing up strong sales and pulling in new customers from smaller cities and remote towns, thanks to the spread of affordable smartphones.

But for India's traditional retailers, many of whom are not yet online, the picture is far less rosy. Weak sales and troubles with the country's new goods and services tax (GST) have cast a pall over Diwali this year.

Diwali, India's festival of lights, is celebrated on the 15th day or the new moon night of the Karthik month of the Hindu lunar calendar. It falls either in October or November depending on the lunar cycle.

On Diwali -- also known as Deepavali  -- people light candles, distribute sweets, exchange gifts, set off firecrackers; and worship Lakshmi, the Hindu goddess of wealth, and Ganesha, the god of auspicious beginnings and prosperity. The festival also marks the beginning of a new Hindu financial year. 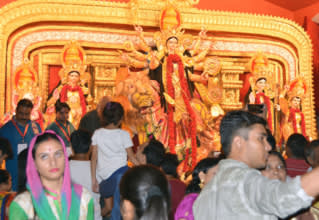 India's festival season began with Durga Puja in late September and will culminate with Diwali on Oct. 19. (Photo by Kiran Sharma)

Flipkart, whose Big Billion Days sale ended on Sept. 24, said it captured 70% of the e-commerce market in India during the five-day period. Within the first 20 hours of the sale, it said, it sold 1.3 million smartphones, "higher than the total number ... [normally] sold across India in a single day, both through online and offline."

The local arm of U.S.-based Amazon, which held its Great Indian Festival sale from Sept. 21 to Sept. 24, also broke records, it said. "We are humbled that the latest version of the great Indian sale was our biggest shopping event ever, with remarkable growth across categories, led by smartphones and large appliances growing multiple times [versus] last year," said Manish Tiwary, vice president for category management at Amazon India.

Online retailers are taking a bigger slice of Indian wallets. Neither Flipkart and Amazon disclosed their gross merchandise value, or the total value of goods sold during the preholiday sale. But research and advisory specialist RedSeer Consulting found that online sellers had their best-ever performance over the five-day period from Sept. 20 to Sept. 24. They raked in sales of $1.5 billion, up from $1.05 billion in 2016, an increase of more than 40%. Compared with 2015, when sales totaled $720 million, the figure has more than doubled, according to RedSeer.

Out of a total GMV of $1.5 billion, Flipkart along with its fashion portals Myntra and Jabong accounted for 58%; Amazon 26%; and such as Paytm, Snapdeal and Shopclues 16%. Last year, RedSeer said, Flipkart and Amazon had shares of 50% and 32%, respectively, out of a GMV of $1.05 billion.

Both Amazon and Flipkart, which are flush with capital, offered discounts of 40-90% for products such as smartphones, mobile accessories, home appliances and branded apparel. Cash refunds and product exchange offers were also used to woo customers. Amazon's second holiday sale ahead of the Oct. 19 Diwali festival will run from Oct. 4 to Oct. 8 offering up to 40% discounts on mobile phones. Flipkart has also announced another sale from Oct. 5 to Oct. 8, and will offer discounts of up to 80% on clothing, footwear and furniture. 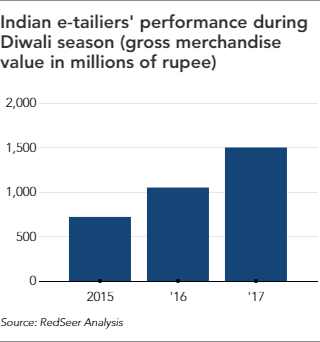 These promotional efforts do not come cheap. In August, Flipkart secured about $2.5 billion from Japan's SoftBank Group, nearly four months after raising $1.4 billion from Chinese internet company Tencent Holdings and U.S. tech companies eBay and Microsoft. Amazon, in June last year, announced plans to pump an additional $3 billion into its Indian business, raising its total investment in the country to $5 billion.

Flipkart said its customer volume doubled this year, with 35% of them new. "We have seen an over 1,000% increase in orders from remote locations" such as Jammu and Kashmir in India's north, and Arunachal Pradesh and Mizoram in the northeast, the company said. Amazon, meanwhile, said 85% of its customers in smaller "tier-2" and "tier-3" cities are new. 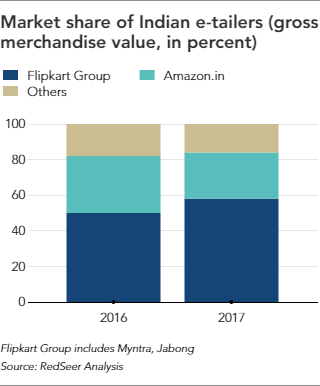 The cheer of the web emporiums, with their aggressive pricing, is matched by the gloom of brick-and-mortar retailers, particularly small ones. They do not appear to have high hopes for this Diwali.

"Now, we don't rely on festivals for customers to indulge in extensive shopping," said Devendra, who runs a textile shop in New Delhi. "It's not like old times anymore, when people waited for festivals to buy clothes. Now they are buying every week, especially the younger generation, and mostly from online marketplaces," he said. 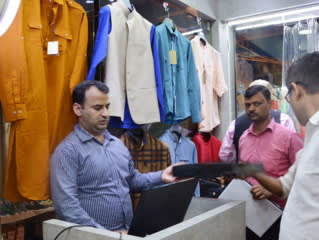 Sachin Sethi, who sells menswear, said this holiday season has been lackluster so far. Traders are still adjusting to a new goods and services tax, which took effect July 1. Many are having trouble registering with tax authorities.

"Several of my manufacturers have not received their GST [registration] number, even a month after applying for it. Authorities must fast-track this process," said Sethi, who plans to go online and hopes to join Amazon's platform soon.

Amit Narula, who also sells clothing, said there is nothing to look forward to this festival season. "First we suffered due to demonetization of high-value bank notes, and now there's GST, which we still have not gotten used to," he said, adding the government should have implemented the new tax regime after the festival.

In November last year, Prime Minister Narendra Modi scrapped 500 rupee and 1,000 rupee notes in an effort to curb untaxed wealth, corruption and counterfeiting. The drastic step withdrew some 15.4 trillion rupees, or 86% of the total, from the cash-heavy economy, disrupting business activity.

In Mumbai, a costume jewelry seller said he is taking beating on margins. He has not raised the price of his products, fearing low demand, but is shelling out higher GST on those items. He is making up for it by selling beauty and wellness goods, as they come with a fixed maximum retail price.

The Indian economy has suffered one of its biggest slumps in recent years. Gross domestic product grew 5.7% in the April-June quarter, its slowest expansion in three years, mainly due to the lingering impact of demonetization and manufacturers trimming back inventories ahead of the July 1 rollout of the GST.

But consumption is likely to remain robust on the back of strong growth among online retailers. According to Anurag Mathur, a partner at accountancy firm PricewaterhouseCoopers, the formal retail industry, online and offline, will grow 20-25% over the next five years.