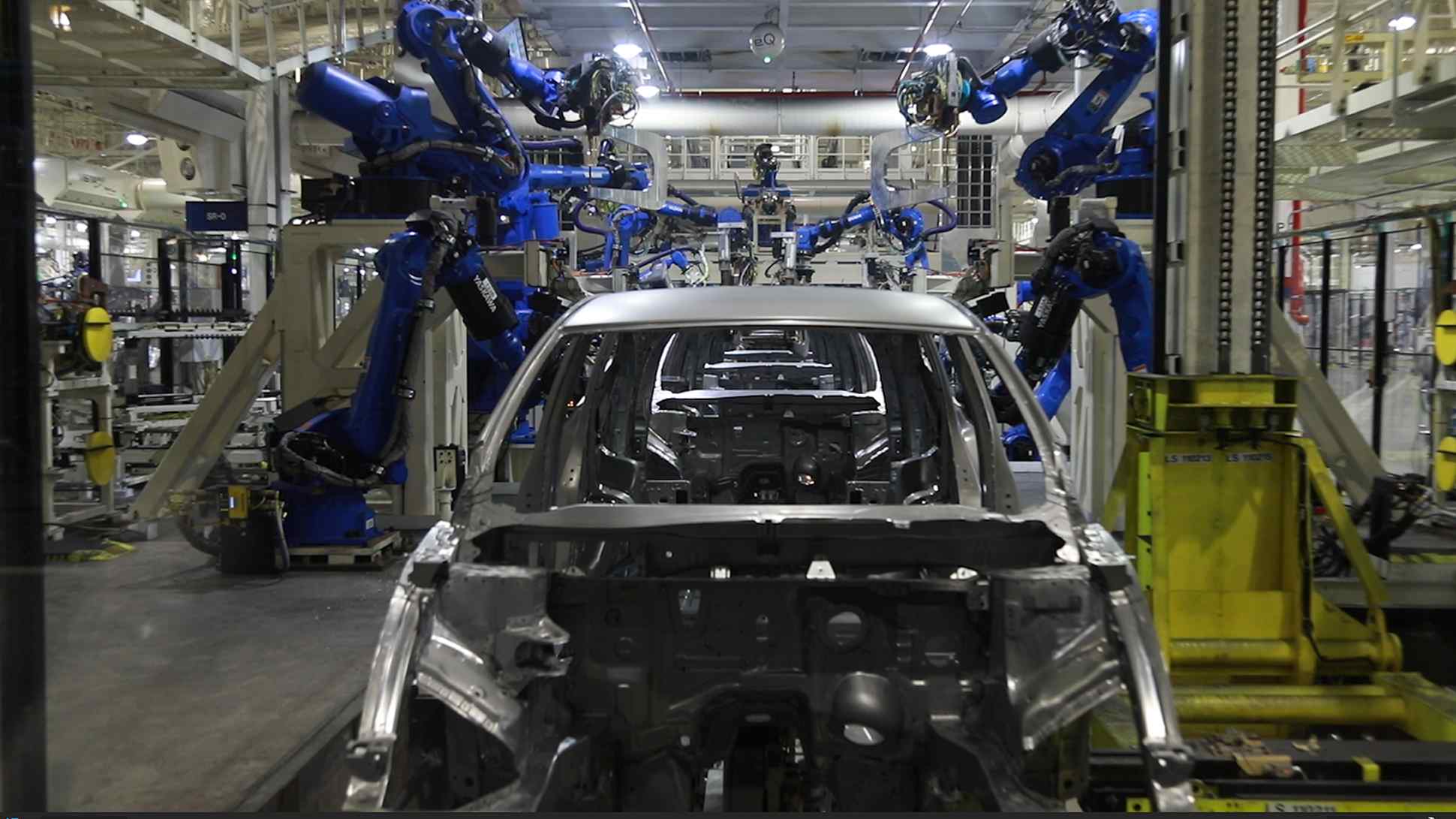 PALO ALTO, U.S. -- The U.S. auto industry is struggling with slow employment growth. Economists mostly put the job losses down to automation: It simply takes fewer people to make a car than it once did.

American assembly line workers see things differently. They blame the country's free trade agreements with Mexico and other countries for their plight and seem oddly untroubled by automation. President Donald Trump's administration is also mum on the issue.

At Honda Motor's East Liberty Auto Plant in Ohio, robots stand in rows on its welding and steel-plate processing line. The few humans who operate them do so remotely. Much of their work consists of monitoring automated processes. More than 700 robots quietly and precisely turn out the sleek bodies of sport utility vehicles at the factory.

Three years ago, robots were installed on the production line that place rubber seals around the windshields. Such machines are well suited to dangerous tasks, such as lifting heavy loads, or dull and repetitive ones. "We use robots to maintain consistency and improve efficiency," the plant's production control manager said.

U.S. automakers are one of the world's biggest users of industrial robots. According to the International Federation of Robotics, the U.S. car industry had 127,000 industrial robots installed in 2016, up 70% from 2006. In the wake of the global financial crisis, General Motors and other automakers held back on investment in new plants, instead focusing on raising productivity. They did this mostly with robots.

Statistics from the U.S. Bureau of Economic Analysis show the U.S. automotive industry generated a record $175.9 billion in added value in 2016. Meanwhile, the industry's employment is only at 70% of its peak in 2000. Industrial robots increasingly replaced human workers after the financial crisis, something that helped revive the U.S. car industry, said Kristin Dziczek, an analyst at the Center for Automotive Research. This raises the question of whether U.S. autoworkers will come to view robots as mechanical job thieves. Interestingly, they often say the opposite.

Down with free trade

D.J. Marshall, 42, has worked for more than two decades at a Ford Motor plant in Utica, a small town north of Detroit. Marshall said he is grateful to have robots in the factory. "It has made work easier and smarter," he said.

"When I started my career in 1994, there were people who said all those jobs are going away. Robots are going to take our jobs away," recalled Chris Vitale, 44, who works for Fiat Chrysler Automobiles and lives in St. Claire, near Detroit. "I heard this argument in 1994. And here it is 24 years later and I am still here, hoping to make it another six years." Vitale thinks things will probably never get to the point where robots can do everything humans do. Such optimism among line workers is common.There are two reasons for this. First, they believe Trump's promise to restore the lost luster of American manufacturing. Second, the U.S. economy is recovering from its 2009 low.

Their view of free trade is much more hostile. Marshall, a Ford factory worker, blamed a decision to shift production at a local Chrysler plant to one in Mexico for the loss of 2,000 American jobs. One of his former colleagues now lives hand to mouth. He puts the blame squarely on the North American Free Trade Agreement. These workers back Trump pledge to reduce the country's trade deficit and bring back jobs. Because trade makes it easier to separate friend from foe -- the foes being foreign -- it draws more public attention and sympathy than job losses caused by automation.

The Trump administration, too, has had little to say about the impact of automation on employment. Referring to the threat of robots taking away jobs, U.S. Secretary of Treasury Steve Mnuchin said, "It's not even on our radar screen. ... [It is] 50 to 100 more years away." Trump's predecessor, Barack Obama, stressed the importance of education, believing that automation could become serious labor issue. But the Trump administration appears to be avoiding a debate over what skills workers will need to survive in the era of artificial intelligence.

The U.S. economic recovery also masks the urgency of the automation question. Auto sales hit an all-time high of 17.55 million units last year. U.S. auto plants are running full-tilt and employment in the industry has ticked up as well. Nick Kottalis, a trade union leader at a Ford truck factory, thinks the company has weathered the crisis and is now increasing employment thanks to the hard work of people, not robots. "People on production lines work so hard -- 10 to 11 hours every single day -- to make their living," Kottalis said with pride.

If manufacturers continue their jobs revival, there is no need to worry. But behind closed doors, companies are working on new ways to put more robots to work. According to the International Federation of Robotics, the takeup of industrial robots in factories around the world, including U.S. facilities, is forecast to rise at double-digit annual rates through 2019. Not only will the number of robots increase, the range of tasks they can do will widen as well.

Japan's Fanuc, a leader in robotics, is working with Nvidia, a U.S. maker of graphics processing units, to develop smarter automatons. For conventional robots, every task, such as moving a foot or grasping an object, requires a lot of programming. But newer robots will use AI to learn new tasks automatically. AI-equipped robots can, for example, assemble complex components instantaneously, once they have been taught to do so. It can take a human years to learn to do something similar.

Tesla, a U.S. electric car manufacturer, relies heavily on automation. Elon Musk, the company's CEO, announced plans to increase the company's production capacity fivefold to 500,000 cars a year by 2018. Many in the industry are skeptical he can pull this off, but if he does, it will be almost entirely due to a manufacturing model driven by robots.

Gill Pratt, CEO of the Toyota Research Institute, Toyota Motor's AI research and development unit, pointed out that the advent of AI means new robots are being developed at unprecedented speed. "If you have the machines connected to each other, and you have deep learning, when you put all of this together, you end up with hyper-exponential [growth]," Pratt said.

He is not entirely comfortable with the pace of change. "It takes time for people to adapt and adjust and to learn new skills. This is the major issue," he said. Pratt and other researchers say the current wave of automation sweeping through industry is different, even though the process has been going on for decades. Pratt is a former robotics team leader at the Defense Advanced Research Projects Agency, part of the U.S. Department of Defense.

Large U.S. automakers have learned from their past mistakes. They cannot hide from reality. In the past, they lagged far behind their Asian rivals in Japan and elsewhere in the race to build better small cars. Heavy pension burdens forced GM and Chrysler -- now owned by Italy's Fiat -- into bankruptcy. The hubris of car company executives caused irreparable harm to the industry. Now they are turning to automation to stay in business.

But there is a cost. For every additional robot introduced per thousand workers, five or six people lose their jobs, according to a paper presented in late March by Massachusetts Institute of Technology professor Daron Acemoglu and his colleagues. The paper caused ripples in industry.

U.S. car sales fell for a fifth straight month in May to their lowest point since the financial crisis. With production likely to decline, workers may have to learn new skills to stay one step ahead of the robots. The U.S. faces a big challenge: how to help people work in harmony with AI. The car industry may be just the beginning.