Foreign direct investment in South Korea tumbled 36% year on year to a six-year low of about $3.17 billion in the first quarter of 2019 on a declared basis, according to an FDI Trend report released by the nation's Ministry of Trade, Industry and Energy.

The figures for the January-March quarter showed that while the manufacturing sector saw a 22% decline, the service sector experienced a much bigger drop of 43%. The sharp declines are attributed to the end of tax breaks in 2018.

Seoul hopes to attract more than $20 billion in foreign direct investment again this year. But this looks doubtful due to a big drop in the January-March quarter. Quarterly growth in foreign investment has been mired in negative territory since the 2018 July-September quarter, suggesting that overseas companies are becoming cautious. 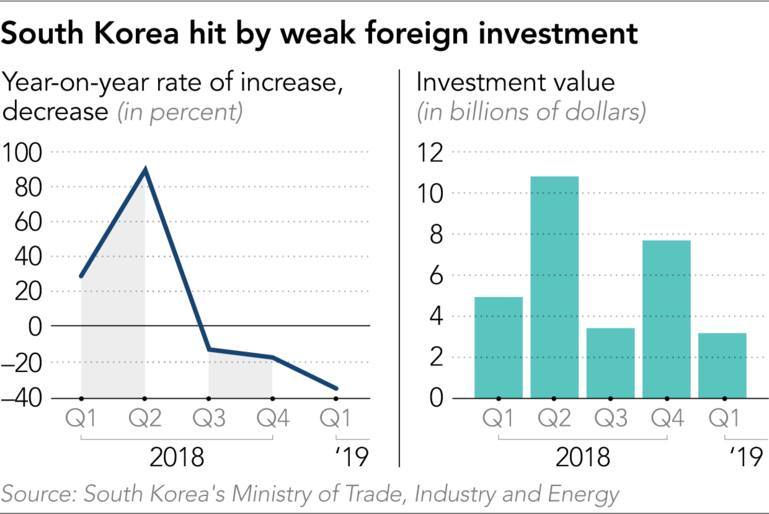 China, the U.S., the European Union and Japan are major investors in South Korea.

The Maeil Business Newspaper, a South Korean business daily, reported that EU members prioritized investment within their own region due to Brexit. It is believed that U.S. and Chinese investment slowed amid escalating trade friction, while Japan's drop was due to worsening diplomatic ties.

But the Ministry of Trade, Industry and Energy cited the end of tax breaks for overseas investors as the main cause.

Seoul had provided tax breaks to foreign investors until 2018, with corporate and income taxes reduced by between 50% and 100% for up to seven years. But these were withdrawn this year after the EU pointed out that it was an unfair because it did not treat domestic and overseas companies equally.

Now that the incentives are gone, Seoul is expected to face problems attracting foreign money. Seoul wants to attract foreign capital to places like this sprawling industrial district in Incheon.   © Reuters

However, U.S. and European investment may not have decreased as the official figures suggest. Regions outside Japan, the U.S., Europe and China are labeled "the other regions." These accounted for less than 10% of foreign direct investment a year ago, but nearly tripled from a year earlier to over 30% in the latest quarter.

The trade ministry said that the sharp increase in investment by "the other regions" came as more U.S. and European companies and other investors purchased South Korean companies and properties via tax havens such as the Cayman Islands.

Progressives are South Korean President Moon Jae-in's main supporters. In July 2018, his administration revised the law to slash the maximum weekly work hours to 52 from 68. Moon is also trying to toughen environmental regulations and is targeting semiconductor factories, a key driver of the country's economy.

The business community sees these and other measures as anti-business, which has scared off foreign investors. Some say the government should ease regulations, not tighten them.

The service sector has stores with long hours, giving them no choice but to hire new employees to comply with the new law and regulations. Their increased burden is believed to have discouraged foreigners from investing in this sector.