Foreign oil companies chomp at the bit to return to Iran

TEHRAN -- The end of Western economic sanctions on Iran over its nuclear program is the starting gun for an international race to develop the country's oil fields. Asian and European oil companies are keen to get in, and Iranian leaders are equally eager for foreign investment to rebuild the economy. Although hopes are high, Iran's return to the global oil market could push already weak oil prices further downhill.

Iranian and Chinese flags fly side by side at the North Azadegan oil field in southwestern Iran. "We've started test operations," said  Karamat Behbahani, the field's director. "Once regular production starts, we will produce 75,000 barrels a day," he said, standing outside a gleaming new processing plant.

Further south, China Petroleum & Chemical, or Sinopec, is developing the Yadavaran oil field. Chinese business people are a common sight at the airport in the southern city of Ahwaz, the gateway to the fields.

Western sanctions made it difficult for foreign companies to invest in Iran's oil industry or buy its crude. While European and Japanese developers pulled out of Iranian projects, Chinese companies stayed on. Now that the sanctions have been lifted, they will face new competition.

Last November, people from more than 130 overseas oil companies -- though none from the U.S. -- descended on Tehran for an oil ministry briefing on new oil development contracts. Participants included majors such as Royal Dutch Shell, BP and Total, Russia's Rosneft and Gazprom, Japan's Inpex and Japanese trading houses, and a South Korean engineering company.

One participant was eager to hear the terms Iran was offering. The country has the world's fourth-largest oil reserves and the largest of natural gas. The sanctions left much of this potential untapped. Although crude prices are falling, Iranian oil fields are attractive because their production costs are much lower than those in Brazil's deep-water offshore fields or the frigid Arctic.

Petroleum Minister Bijan Zangeneh said at the briefing that Iran will open up 52 oil and gas fields with a total investment of $30 billion. He also announced the Iran Petroleum Contract, abolishing the upper limit on recovering costs and granting more flexibility in payments.

Tehran has also been counting the days until the end of sanctions. Oil and gas exports make up a big chunk of government revenue, so falling exports and cheaper oil prices have hit public finances hard. Iran found it virtually impossible to develop new fields because imports of materials and equipment were restricted. 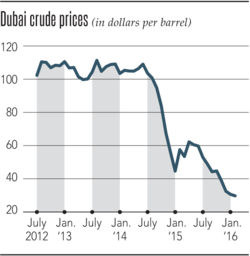 To revive the economy, oil production must rise. According to Zangeneh, Iran plans to increase daily output by 500,000 barrels soon, and another 500,000 barrels by the end of the year. The government aims to almost double production to 5.7 million barrels a day by 2021. Foreign investment is essential if it is to reach that goal.

The 700-sq.-kilometer field has an estimated 26 billion barrels of oil. It is one of the largest oil fields discovered worldwide since the 1990s. A Japanese consortium led by Inpex signed a contract to develop it in 2004, but had to withdraw in 2010 after additional sanctions were imposed on Iran. CNPC stepped in, but Iran terminated the contract in 2014 because it was dissatisfied with what the Chinese state-run firm had achieved. Project manager Mahmood Marashi said he would welcome Japanese companies if they decide to return.

North and South Azadegan are just 15km from the Iraqi border. The area, a bloody battlefield during the Iran-Iraq War of the 1980s, is now the arena for a different kind of struggle.

Nearby, on the Iraqi side of the border, is Majnoon, a field being developed by Royal Dutch Shell and Malaysian state-owned oil company Petronas. Exxon Mobil of the U.S. and Britain's BP operate other big Iraqi fields in the area. Since Saddam Hussein was ousted in 2003, the Iraqi government has been pulling in foreign investment, and boosting Iraq's production. South Azadegan is the only field in the area that has a spot open for foreign investors. Japanese government officials are eager to return. They are teaming up with the private sector in hopes of beating out rivals from elsewhere.

The competition extends out to sea. The South Pars gas field is located in waters near the Iran-Qatar border. Royal Dutch Shell, Total and Petronas may return to the field -- called North Field in Qatar -- which they were forced to abandon due to the sanctions.

Iran's return to the forefront of the global energy market is not all good news for the industry. In mid-January, shortly before the U.S. and Europe decided to ease sanctions, West Texas Intermediate crude futures fell below $30 a barrel to a 12-year low. The benchmark grade fell on speculation that higher output in Iran would aggravate the oil glut, along with slowing demand in China.

The European Union had banned crude oil imports from Iran as part of its additional sanctions. While the sanctions were in place, Iran cut production and kept unsold oil in tankers on the Persian Gulf. Now that oil is finding its way into the market. 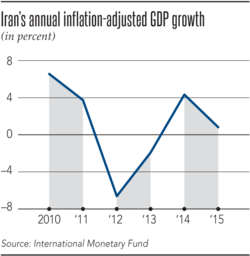 Oil prices started their free fall after Saudi Arabia, a key member of OPEC, decided against cutting production in 2014. Market players concluded that OPEC had given up on efforts to maintain prices. The oil cartel has been unable to act in concert since then. Koichiro Tanaka, director of the JIME Center at the Institute ofEnergy Economics, Japan, predicts Iran's production increase will deepen divisions within OPEC.

Another worrying factor is the rift between Sunni leader Saudi Arabia and Iran, the major Shiite power in the Middle East. Facing each other across the Persian Gulf, the two oil producers are longtime rivals. Saudi Arabia is unhappy about the West cozying up to Iran since the nuclear deal.

The Saudi worries may be overblown: Experts are skeptical of Iran's plans to boost output. The International Energy Agency, a think tank, estimates Iran will only be able to increase its daily output by 300,000 barrels by March 2016 and is unlikely to meet its short-term target of immediately raising output by 500,000 barrels.

Industry officials think Iran will continue selling off crude stored in tankers for the time being, but that it won't be able to boost output soon because it will take time to refurbish equipment and restart projects that were suspended during the sanctions.

Iran will also face difficulties boosting capacity in the medium to long term. There is internal opposition to the move to court foreign investors. Security forces had to be deployed to protect the oil ministry in late January to keep protesters at bay. The government decided soon afterward to postpone a briefing in London scheduled for late February.

Iranian officials had been expected to provide details on the investment program at the London briefing, including bidding dates and conditions. Reports from Tehran say the briefing was put off because business people in the Iranian delegation needed more time to get British visas.

Some observers speculate the delay was an effort to placate hard-line opponents of foreign investment ahead of a parliamentary election in late February. While moderate lawmakers support Rouhani, who is seeking reconciliation with the West, the hard-liners are a force that cannot be ignored.

The nuclear negotiations with the West were conducted so as to maintain the delicate balance between the two groups. The end of the sanctions is a major achievement for the government, and increased oil production will help Iran rebuild its economy. But a rapid opening to the West could escalate tensions within the country.