China: tourists fly out but they don't fly in, more or less

DALIAN, China -- Fewer foreign tourists are going to China these days, their numbers being dragged down by severe air pollution, a strengthening currency and food safety problems. According to the China National Tourism Administration, the number of overseas visitors who visited and stayed at least one night in mainland China, including tourists from Hong Kong and Macau, totaled 55.69 million in 2013, down 3.5% from the previous year.

The dip came despite government efforts to promote tourism. The situation will likely affect the country's economic policy as well as U.S. and European hotel chains' opening strategies.

In Beijing, which has been hit particularly hard by air pollution, the number of tourists fell 10% or more in the January-November period of 2013. 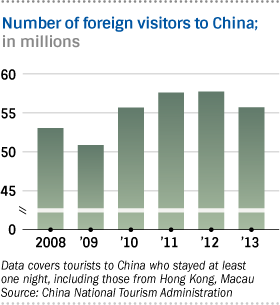 In January 2013, Beijing, Shanghai, Guangzhou, Chengdu and Chongqing introduced a program for transit passengers from 51 countries. The program allows travelers to stay in China visa-free for up to 72 hours provided they restrict themselves to the city they landed in. The system was launched with great fanfare, but the number of first-year users in Beijing was 14,000, far short of the municipal government's goal of 20,000.

Dalian and Shenyang, in Liaoning Province, introduced the same system last month. At the end of 2013, the two cities posted an electronic ad in New York's Times Square, hoping to get New Year's Eve revelers thinking about quick trips to China. Did it work? Not yet, according to a sales manager at a five-star hotel in Dalian. "There has been no sign of our room-utilization rate picking up," the manager said.

Foreign luxury hotel chains, meanwhile, are watching their China strategies dissolve. Year-on-year sales at hotels of three or more stars declined 12% during the first six months of 2013, according to the Chinese Academy of Social Sciences.

The latest statistics from research specialist STR Global confirm that mainland China's hoteliers have it tough. The average daily occupancy rate for 2013 was 62.4%, a 0.7 point decline from 2012 and below the often-cited break-even rate of 70%. Hotels have been left with no choice but to reduce room charges, bringing the average daily rate down 3.4%, to 535.72 yuan ($88.3).

The most important statistic for hotels, revenue per available room (room revenue divided by rooms available) fell 4.5% in 2013, to 334.25 yuan. RevPAR has declined for three consecutive years after reaching 395.99 yuan in 2010, the year the Shanghai Expo attracted visitors from around the world.

By way of comparison, RevPAR in Tokyo is more than $150.

Starwood Hotels & Resorts Worldwide -- operator of St. Regis, Westin and Sheraton hotels -- announced in 2011 that every two weeks, a Starwood hotel was opening its doors somewhere in China. It was so committed to the emerging market that it moved its global headquarters and entire senior management team to Shanghai for a month that year. "Starwood is no longer an American company that happens to run some hotels overseas" President and CEO Frits van Paasschen said. "Eighty percent of our future pipeline is outside of North America, and nowhere is more emblematic of our global growth than China."

Starwood was not alone in banking on China eventually becoming a major leisure market on par with the U.S. The InterContinental Hotels Group, the largest hotel operator in China, last year announced an ambitious target to recruit another 110,000 employees and to double the number of hotels in greater China within the following five years.

Meanwhile, overseas travel by Chinese has been growing much faster than expected. The China National Tourism Administration stated that the number of overseas travelers rose 18% in 2013, to 98.19 million.

Some countries have been redoubling their efforts to attract Chinese tourists. France set up a system so Chinese can obtain tourist visas within 48 hours of applying. The new system was in place before the Chinese New Year holidays, which began Jan. 31. The simplified process beats similar systems in the U.K. and other countries by three days.

Stock up while abroad

According to one estimate by the China Tourism Academy, the amount of money spent by foreign tourists in China fell 4%, to $48 billion, in 2013, while Chinese tourists spent $120 billion overseas. The resultant travel services deficit was $72 billion, an eighteenfold leap from 2009 when China recorded its first travel services deficit, $4 billion.

An official at the Institute for International Trade and Investment in Japan said there is no doubt China has surpassed former No. 1 Germany and now has the world's widest travel services deficit.

Many Chinese travelers buy products in countries where tariffs as well as sales and similar taxes are relatively low. According to Bain & Company, a U.S.-based consultancy, 67% of Chinese people's purchases of brand-name products are made overseas.

Money spent by Chinese overseas is not counted as domestic consumption and thus not added to China's gross domestic product.