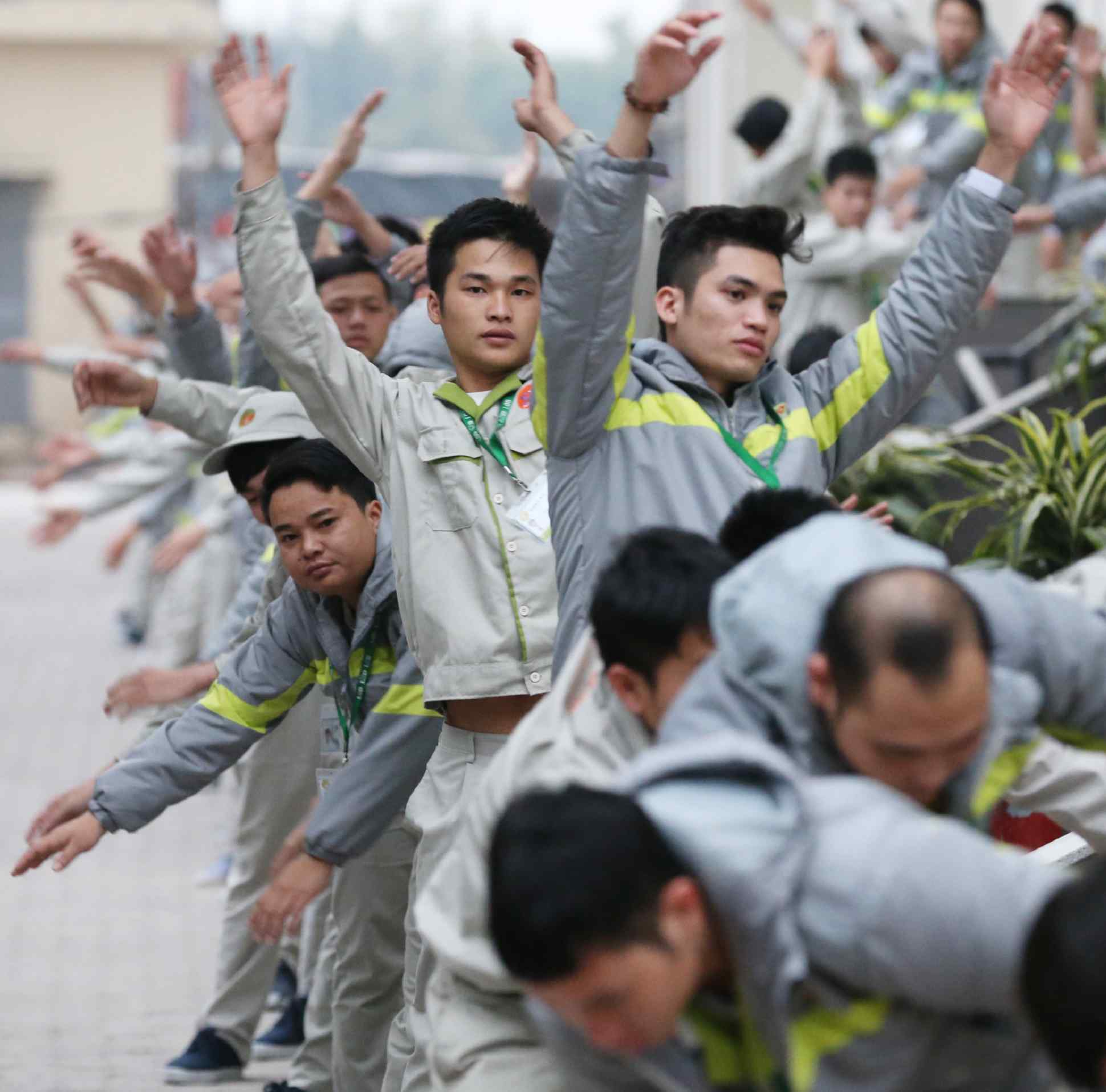 Technical trainees hoping to be sent to Japan perform calisthenics at a school in Hanoi.
Economy

Low pay and high expenses shatter the dream of riches

HANOI -- At 6:30 a.m., trainees line up for calisthenics set to music at a boarding school in the capital that offers Japanese language courses.

Some 600 people, mostly in their 20s and hailing from rural areas of Vietnam, are students at the school. They are preparing for the day they will go to Japan as technical interns. The same company that runs the school also dispatches the interns.

One 26-year-old woman will leave her husband and 3-year-old daughter in Vietnam to work at a food processor that makes bento boxed lunches in Nagano Prefecture, in central Japan. After she completes her internship and returns home, she wants to continue working for a Japanese company, she said. As a technical intern, she is expected to earn 90,000 yen ($810) a month, two and a half times what she made in her previous job.

The number of foreign workers in Japan reached a record 1.08 million in 2016, jumping about 20% over the previous year. Vietnamese were the biggest contributors to the increase, with their numbers rising 56.4% on the year.

Vietnam is promoting the export of labor to gain foreign currency and provide employment to its citizens. Before they can go to Japan, interns learn Japanese language and customs from government-approved organizations.

During the 12 months starting in late October 2015, the number of Vietnamese working in Japan, including students, rose from 110,000 to 170,000. The newcomers are helping make up for Japan's labor shortage.

But the program is not without its problems. According to the head of Sendai-based East Japan cleaning co-op, two Vietnamese out of 50 foreign trainees the organization accepted last year went missing on the job. Four years ago, one Vietnamese trainee sent by the co-op to work at a factory disappeared.

According to Japan's Ministry of Justice, 5,058 foreign trainees went missing last year. Of these, 2,025 were from Vietnam. That compares to 1,987 Chinese.

The head of the cleaning co-op acknowledged that the companies taking in foreign trainees share some of the blame for the disappearances. Problems with pay and working conditions are a contributing factor. In 2016, 239 organizations were cited for nonpayment of wages and other violations.

For some interns, the promise of lucrative work abroad turns out to be hollow. One 30-year-old Vietnamese man tells of how he was sent to Japan, having been told he would make a lot of money. By the time he made it to the country, he was heavily in debt to the labor broker that sent him. He worked at an auto component factory in Mie Prefecture, in Central Japan, but his monthly pay of 70,000 yen did not go far. After deducting expenses for food, he was left with only 40,000 a month in disposable income. He returned to Vietnam last year.

Foreign students in Japan, many of whom come from Asian countries such as China and Nepal, also struggle to make ends meet. In principle, they are limited to 28 hours per week of paid work. One former student from China said it is impossible to pay tuition and living expenses if one abides by the restrictions.

Caregiving will be included under the technical trainee program for foreign nationals, starting in November. According to the labor ministry, Japan will face a shortfall of 380,000 nursing care workers by fiscal 2025.

Two Vietnamese students are already playing a vital role at the Yu-yu Kamiyagawa nursing facility in Fukuyama, Hiroshima Prefecture. After Japanese class, they take part in recreational activities with the elderly at the facility for five hours a day. But one of the students points out that it costs about 2 million yen to get a caregiver's certificate through a vocational school, and that working 28 hours a week is not enough to cover school fees.