Asia's aging population will inevitably affect its economic growth. But demographics are not destiny; all nations have the capacity to develop ways of navigating the transition toward grayer societies.

The main mechanisms for coping with a stagnant or falling working-age population are immigration; encouraging older people and women to join the workforce; and trying to boost the productivity of tomorrow's workers. In the interim, resources can be shifted from those who save more than they consume to those who tap their savings to survive.

None of these approaches is easy, and some conflict with long-established or cultural barriers. But doing nothing is a poor option.

As things stand, most of Asia will be unable to exploit immigration to compensate for shortages of labor and skills. China, India and Indonesia are experiencing net emigration. South Korea, Japan and Thailand have very small net immigration -- around one person or less per 1,000 inhabitants per year. 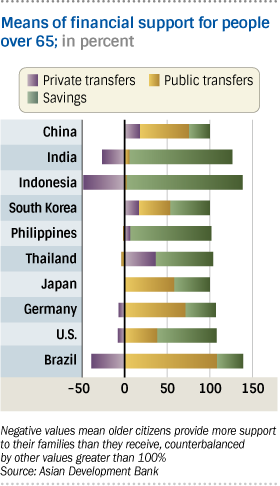 Malaysia, Hong Kong and Singapore have higher immigration rates, at 3.1, 4.2 and 10 per 1,000 inhabitants, respectively. But only Malaysia, India, Indonesia and the Philippines have strong enough demographic positions not to worry for a couple of decades.

Getting women in the workplace

While competition among countries for skilled immigrant labor will doubtless intensify, efforts to cope with aging are more likely to focus on measures to increase the number of women and older employees doing paid work. But there are difficult obstacles to overcome. Changing the gender and age composition of the workforce is not simply a question of legislation.

Asian women have generally low labor force participation rates. Exceptions are Vietnam, Myanmar and Cambodia, where roughly 70% of women eligible to work do so, and China and Thailand, where the ration stands at about 60%. Elsewhere, the participation rate is 50% or lower. Malaysia's rate is 40%, for example, and India's is 30%.

If countries reformed their education, labor-market and social systems to get more women to work, they could establish a virtuous circle. More working women would not only counter the effects of rapid aging but also improve social and economic conditions under which higher fertility rates might be sustained despite the tendency for women in developing countries to have fewer children as their economic circumstances improve.

Evidence from rich countries clearly suggests that fertility rates respond to increases in female labor participation when it is combined with better child care availability, improved working conditions for mothers, and smaller wage gaps relative to men. Japanese Prime Minister Shinzo Abe has made higher female participation a key element in his "third arrow" of reforms, with a focus on better child care. This is certainly an important step, but it is not enough.

The simplest way to get older people to remain in the workforce longer -- and therefore consume, save and pay taxes longer -- is to increase the age at which they retire or become eligible for pension benefits. As life expectancies rise and seniors become healthier, this would seem a logical step. Across Asia, though, the retirement age for men is still rather low, ranging from 55 in Malaysia, Indonesia, India and Thailand, to 60 in China and Vietnam, 62 in Singapore, and 65 in Hong Kong, South Korea, Japan and the Philippines. By and large, the retirement age for women is around 55, though it is five years higher in Singapore, and 10 years higher in South Korea and Japan.

A higher retirement or pensionable age would certainly help keep people in the workplace longer, but this alone may not suffice. Older workers and employers need to be motivated to make new job and retirement arrangements effective on both sides. This would be easier in societies that have high levels of educational attainment and flourishing service sector industries.

While it would be nice if the key to sustaining economic expansion and living standards in aging societies was simply higher productivity, the reality is that it depends on longer-term changes in education and training, investment in new technologies, and inclusive social, economic and legal institutions.

In the meantime, countries will have to develop mechanisms for transferring resources fairly from workers -- who typically generate savings out of their incomes -- to older citizens who draw down their savings because their incomes are inadequate to sustain consumption. There are three ways of doing this: through public transfers by government authorities, through private transfers by families, and through the income derived from personal savings.

Chart 1 shows the extent to which people over 65 depend more on savings income or transfers than on labor income. Three interesting patterns emerge. First, with the exception of Japan and China, Asian countries do not rely much, or at all, on public support for the elderly. For the aforementioned two countries, reliance on the state is higher than in the U.S., but not as high as in Western Europe.

Second, private transfers -- financial help from the family -- are much more important in Asia than anywhere else, covering 20% to 45% of the life-cycle deficits of the elderly in China, South Korea, Thailand and Taiwan. In India and Indonesia, the elderly give more to their progeny than they receive from them.

Third, with the exception of China and Taiwan, income from personal savings is important for elderly Asians, but its impact on the living standards of older people diminishes steadily as they get older. In other words, by the time people reach the ages of 75 to 80, assets have often shrunk or been given to children.

What this picture of funding reveals is the need for Asia to embrace stronger, broader public transfer mechanisms covering pensions and health care. This is all the more important because low or weakening fertility rates, changes in family structures, and gender imbalances will sap the region's traditional strengths in family enterprises and family support mechanisms.

Better-serviced Hong Kong and Singapore stand out, as does the richer and more developed Japan, even though Japanese pensioners are now exposed to wafer-thin domestic government bond yields at a time when the government is trying to raise inflation.

But for developing Asia, the clock is ticking. Per capita income is absolutely or relatively low and populations are aging fast. A relatively small number of workers are covered by state pension schemes. Premature withdrawal of savings before retirement is common. Benefits are frequently taken on retirement as a lump sum, raising the risk that people will outlive their financial resources. By and large, pension incomes are not indexed to inflation, so real incomes can dwindle very quickly.

It is not too late to fix these problems, but time is running out. Western countries had a century to build up social and elderly care infrastructure, and even that is inadequate for dealing with the challenges that lie ahead. Developing Asia has two decades or so to find effective solutions, at a time when medium-term growth prospects are becoming increasingly pedestrian.

George Magnus, an economist and senior adviser to UBS, is author of "The Age of Aging: How Demographics are Changing the Global Economy and Our World."