Global markets calm before the storm

HONG KONG -- Financial markets are getting back on an even keel after the turmoil that swept the globe this summer. But those who weathered the worst of the storm -- particularly in Chinese and other Asian markets -- are bracing for more headwinds. 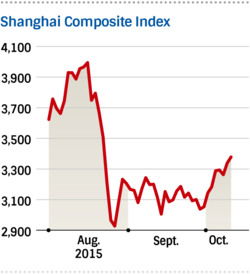 The Shanghai Composite Index, the Dow Jones Industrial Average and crude oil prices have been moving in step recently: All three dropped in August, when China's economic slowdown became apparent, bottomed out in September and have remained solid since.

It is far from a sharp rebound, but they are at least on a moderate recovery path.

The trouble in August explains their parallel paths. Falling demand from China pushed crude oil prices down. Investors took this as a sign that the world's second-largest economy was losing steam and sold off their Chinese shareholdings. The sudden stock market plunge, in turn, was seen as proof that the Chinese economy was worse off than previously thought. Fearing a global economic downturn, investors began unloading U.S. shares, too.

Market stability since September shows that this negative chain reaction has halted, at least for now. The "de-risk" attitude, in which investors try to minimize price fluctuation risks as much as possible, has subsided on expectations of stimulus measures by the Chinese government.

But despite this recent stability, concerns over an economic downturn clearly remain. Earlier this month, it was reported that Standard Chartered was going to cut 1,000 of its 4,000 senior management positions. The cut is highly likely to lead to a significant workforce reduction among rank-and-file employees as well.

Though based in Britain, the bank's main market is Asia, where the bulk of its 90,000 employees are assigned. In 2014, 30% of its operating income came from greater China, followed by 20% from members of the Association of Southeast Asian Nations and 10% from South Asia.

Standard Chartered has been dealt a double blow. Worsening economic conditions in Asia have hurt its lending operations, while its commodities activities have been hit by falling resource prices. The bank has already had to cut dividends. The decision to slash its workforce indicates it does not see the earnings environment in Asia improving anytime soon.

Chinese investors are also bracing for another storm. Sales of bond investment funds in September rose 50% from the previous month, while sales of stock investment funds fell 50%, according to data compiled by a Chinese company and reported by The Wall Street Journal. This is a typical "flight to safety," and the main player is individual investors. The stock market plunge seems to have had little effect on consumer spending. Chinese tourists visiting Japan during the weeklong National Day holidays from Oct. 1 splashed out in a big way. Department store operator Takashimaya reported that tax-free sales to Chinese consumers during the period was more than double what it was last year. But individual investors in China are still skittish -- the country's share prices have dropped more than 30% from their peak in June.

The dust from China's stock market turbulence may have settled, but the country is still setting the tone for much of the world economy.

For instance, the U.S. Federal Reserve Board refrained from raising key interest rates in September due to concerns over the Chinese economy. The U.S. stock market, meanwhile, now anxiously monitors Chinese economic news, something all but unthinkable just a handful of years ago.

The recent turmoil over Swiss mining giant Glencore is another example, although an indirect one, of China's tail wagging the world.

Glencore suffered from the slump in commodities markets caused by declining demand from China. Speculation spread that the company, which has a dominant share in the production of copper, zinc and coal, would release its inventories to secure funds, further pushing down commodities prices in September.

In addition, investors who were worried about credit risks sold shares of Glencore and other mining companies around the world. The sudden drop in Glencore shares knocked more than 300 points off the Dow Jones average on Sept. 28.

In early October, Glencore announced plans to drastically cut zinc production in response to weak demand from China. The news raised expectations for an improved supply-demand balance and pushed up zinc and share prices, making the company a closely watched issue. But the real issue is deepening uncertainty over China's economic outlook. Its gross domestic product for July-September grew just 6.9% year-on-year, according to figures released Oct. 19.

China and other emerging economies have been propping up the global economy since the 2008 financial crisis. 2015 may be remembered as the year when that state of affairs came to an end. Although the U.S. has an exit from crisis mode in sight, its economy is far from solid, as the September jobs data shows. If China and other emerging economies falter, the global economy will face even greater uncertainty.

Mohamed El-Erian is writing a book about the end of the "new normal," as he dubbed the era following the financial crisis. Growth is slowing around the world, and the wealth gap is widening. If this situation continues, he argues, the world will see even greater economic and social instability.