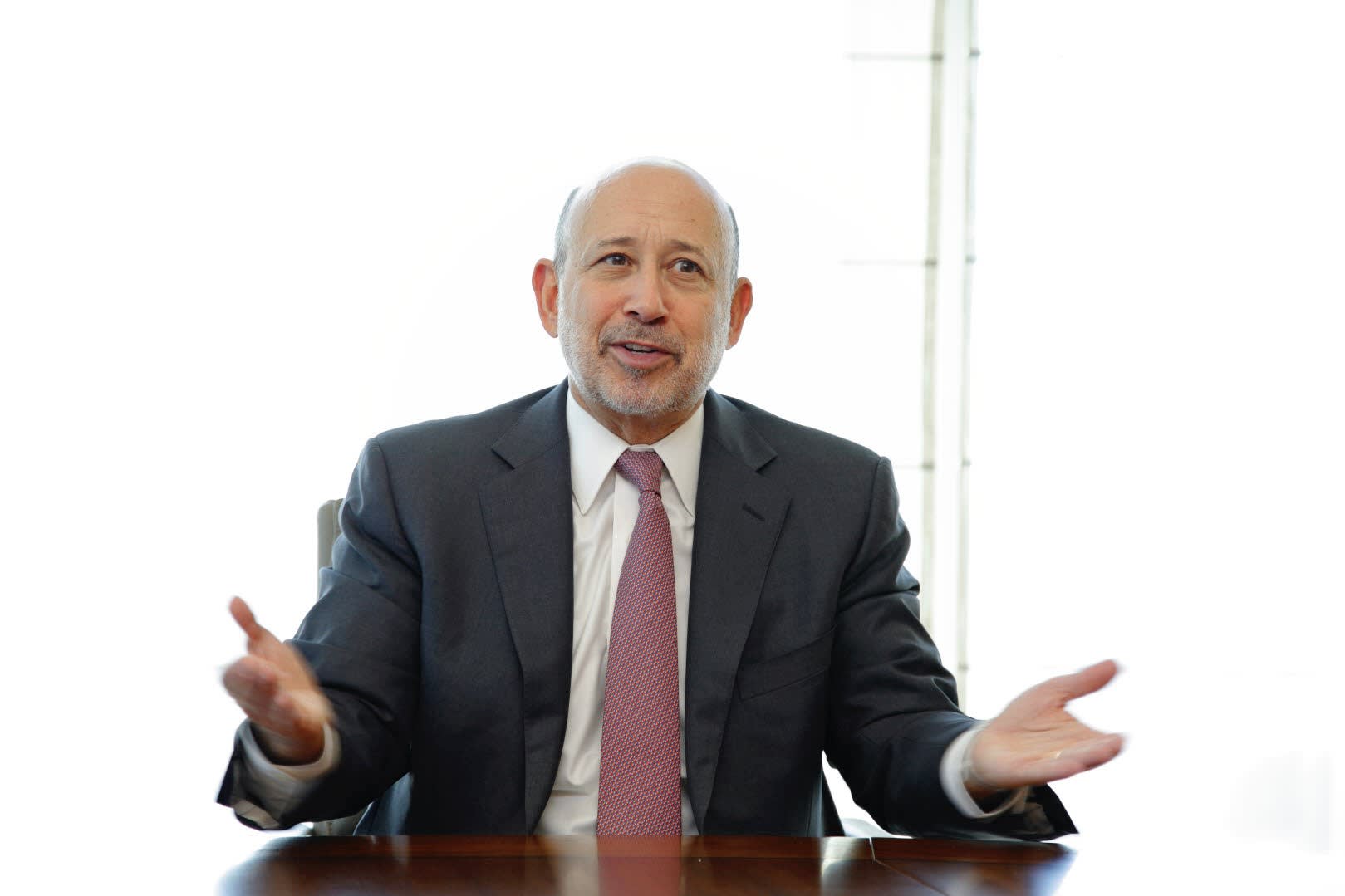 In a wide-ranging interview with The Nikkei, Blankfein also touched on the U.S., emerging markets and his own company.

Q: What are your expectations for the U.S. economy?

A: I think 3% growth is attainable. There are many signs indicating positive growth. Banks have reduced leverage and corporate balance sheets are strong.

Q: Globally, what problems do you see?

A: Growth in Europe is still slow. And growth in China is at a kind of inflection point.

Q: Emerging markets are lamenting the impact of U.S. monetary policy. What's your take on this?

A: The tapering process is occurring, and I think it will continue. However, the Fed has stated that the tapering off of (quantitative easing) will not affect interest rate policy, which means monetary policy will continue to be accommodative.

Emerging economies have higher growth and higher risk. Whenever you have fast growth, you run the risk of over-investment in certain areas. If you grow at 2%, you're more likely to get more things right than if you're growing at 9%.

Emerging markets depend a lot on external investment. There will be times when the spigot will open and a lot of investment will flow into them, and then times when it'll be shut a bit. So I think they'll be riskier, subject to more volatility.

The fact that there is volatility now is making everybody nervous, but it's not a surprise. I have a bullish view on most (emerging markets) over a long period of time, but they have challenges to work through.

Q: What do you think of Japan's economic policy under Prime Minister Shinzo Abe?

A: Japan is the No. 3 economy, and it's not No. 3 by that much. It's not that far from the size of China's economy. So that's a big source of growth the world has done without for a long time. It would suit not only the Japanese but also everybody else for Japan to grow.

After experiencing slow growth for almost two decades, you have to take more aggressive moves, which the government looks like it is. We believe the steps taken have been appropriate.

Q: Adopting aggressive monetary and fiscal policy is one thing, but moving quickly toward structural reform can be difficult. Do you think Abe can carry out the necessary measures?

A: It's easy to say but really hard to accomplish. If a reform is designed to make labor more nimble and make it easier to reduce your workforce, that has a big social effect in a culture where employment was supposed to be for life. To the economy, that may be a reform; to the social fabric, it may be a violation.

Those things have to be reconciled and difficult choices have to be made. That's what politicians have to balance.

Q: From a business standpoint, do you see much promise in the Japanese market? Merger-and-acquisition activity has been picking up.

A: I think the business opportunity is very high. And we've seen a number of movements by Japanese companies outside of Japan, which makes sense. It's necessary for big Japanese companies to go outside the borders. Their management is good and the yen is still strong. Certain industries in Japan, such as autos and electronics, have done that for a long time. Now other companies are branching out.

There are many Japanese companies deciding to compete on the global stage. We expect to see that and hope to be a part of it.

Q: How are your relations with Japanese banks?

A: We get along with all the main banks in Japan because we work with them. We have had a special relationship with Sumitomo Mitsui Financial Group that goes back years, including a moment of stress. We understand history and long-term relationships and we always respect that. At the same time, Sumitomo Mitsui deals with other American banks and we deal with other Japanese banks.

Q: More than five years on from the global financial crisis, where is Goldman Sachs heading? Is pure investment banking still the best model for you?

A: We decided to not be "everything to everybody." There are banks that are investment banks, commercial banks, credit card firms, consumer banks, etc. -- all in one. Instead, we're focusing on corporate, institutional markets, asset management and private wealth management. The focus on these areas, strictly investment banking products, allows us to stay nimble.

Globally, we're under 35,000 people. The megabanks have hundreds of thousands of people. We believe our model allows us to serve our clients well.

A: I think the Volcker Rule is broad enough to allow us to do what we need to do for our clients as a market maker. It allows us to assume risk on behalf of our clients, which is appropriate. And the new rules, more generally, force onto us more transparency, more supervision, more capital.

It's a trade-off between making us a less leveraged firm and a safer firm. We might make slightly smaller returns, but those returns will be on a safer structure. It can probably be a good trade-off for our investors as well.

Q: Do you believe in the theory of the "Great Rotation," whereby money is destined to flow from bonds into stocks?

A: I believe in it and eventually it should happen. I also believe it really hasn't happened yet. If you think you should have 30% more in equities than last year, the market has given it to you, because whatever you had in equities is up by 30%. But you haven't seen people come out of fixed income yet.

Once people become convinced of growth, at some point they will say, "I should have a bigger allocation to equities and less to fixed income."

Q: Goldman Sachs' reputation took a beating during the crisis. Has it recovered?

A: Over the last couple of years we've worked hard to engage, and I think it's a better dynamic now. That being said, we still have a lot of work to do. It will take some time. The trauma of the crisis was real and economic growth is still not what it should be.

It's going to be a long time before most people in the world are in love with bankers, but that is not going to stop us from working hard to be a better institution.