Owners torn between desire for business and possible second ban HANOI -- The cafes lining an old but still functioning train track in Hanoi are quietly reopening for business following a closure order last autumn by the municipal government over safety concerns.

"Train street," which has become famous on Instagram, is a tourist draw in central Hanoi. Restrictions have eased in the absence of tourists following the outbreak of the novel coronavirus.

The tourism industry wants the cafes left open to attract visitors. But operators face a dilemma because they may be ordered to close again if tourists return to train street in droves.

"The number of customers is about 5% of the year-before level, but that is better than no visitors," one owner said, adding that the ban on tourists has been eased since February. Cafes are able to operate freely, ironically, because of the plunge in visitor numbers.

The track runs dangerously close to the cafes. Most, converted homes with only a few tables and chairs, stand a little more than a meter from the line. While the authorities tolerate local residents walking along the track, the cafes operate under the table.

In October 2019, the municipal government barred tourists from entering train street because incursions onto the tracks often forced trains to stop suddenly.

The track-side cafes began appearing about two years ago, according to local media. The rail line and nearby homes, built more than 100 years ago during the era of French colonial rule, have become popular with photographers through social media and overseas news broadcasts. Cafes then sprung up along the 300-meter track, attracting tourists, especially Americans and Europeans. There have not been any accidents involving tourists on the track, a cafe owner said. (Photo by Tomoya Onishi)

Tours to Ha Long Bay, a UNESCO World Heritage Site about three hours by car from the center of Hanoi, are popular among visitors to the capital. Compared with Ho Chi Minh City, the commercial hub of southern Vietnam, and the tourist city of Danang in the central part of the country, Hanoi has fewer attractions. Train street was shut down immediately after local cafes were added to tour routes, according to a Japanese travel agency operating in Vietnam.

Opposition to the shutdown is strong in the area. Because the track is a branch line, it carries only four or five trains a day and none at night. Train traffic is even lower on weekends. There have not been any accidents involving tourists on the track, a cafe owner said, calling the shutdown "an overreaction."

Nhu Thi Ngan, president of travel agency Hanoi Tourism, questioned the municipal government's approach to the issue, saying efforts are needed to allow the cafes to stay open while paying heed to safety.

Decision-making in Vietnam's one-party state is often opaque. Laws and regulations can be vague and interpretations vary, depending on who is enforcing them.

Some tourists have managed to evade the ban. One reportedly received a text message from a cafe owner in January that said: "You will be all right if you come as my friend." Public security authorities strictly enforced the entry ban at first, but later began to bow to pressure from cafe owners, giving tacit permission for "friends" to stop by.

Local residents uniformly said that the absence of interference by authorities is tantamount to approval in Vietnam. Although signs that read "off limits" still stand on train street, even tourists can freely walk along the track now. Most cafes stay remain closed due to the dearth of tourists from abroad, but some continue to operate on a limited scale. 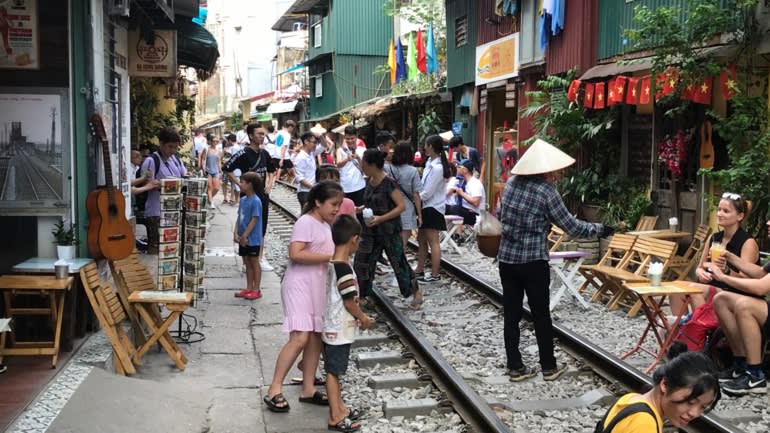 Although signs that read "off limits" still stand on train street, even tourists can freely walk along the track now. (Photo by Tomoya Onishi)

"This is a very fashionable place. As there are many good places for taking photos, I hope many more cafes will reopen for business," said a 40-year-old employee of the municipal government.

The course of the pandemic will be critical. Vietnam has taken tougher infection-prevention measures than its neighbors, prohibiting flights from China on Feb. 1 despite the fact that tourists from the world's second-largest economy account for some 30% of the country's foreign visitors. It closed its borders completely in late March.

Vietnam also imposed a three-week ban on nonessential outings in April and immediately halted flights to and from Danang in July after the city's first outbreak of coronavirus in about three months.

Tourism contributes about 10% to the country's gross domestic product. The government is considering allowing overseas visitors back in to bolster the economy. Owners of cafes along the track eagerly await the end of the pandemic, but one expressed concern that a total ban may be slapped on again if tourists return in large numbers.

As many of Vietnam's street cafes operate illegally, owners can often be seen hastily clearing away tables and chairs whenever police appear. This game of cat and mouse is part of daily life. Similarly, the tug of war between the owners of the train street cafes and the municipal government is likely to continue for some time.