A confectioner in the northeast Chinese city of Dalian is busy ahead of the Lunar New Year celebrations.
KEN MORIYASU, Nikkei staff writerJanuary 27, 2014 13:00 JST | China
CopyCopied

DALIAN, China -- Luxury gifts given to public officials "behind the scenes" are all the rage in China following a crackdown on extravagance by President Xi Jinping's government.

Companies often send gifts to public officials at this time of year, when China celebrates the Lunar New Year.

But after the austerity order came down from on high, the givers have had to be more discreet. One way to ensure that the proper palms are greased is to text the official, "You have received a gift," along with an identification number and password. The official then goes to a designated website and enters the password. Up pops an electronic catalog. One catalog lets the lucky recipient choose from 23 items priced at 3,559 yuan ($588), ranging from a set of golf clubs, to an espresso machine, to high-end spirits.

Since the gift has already been paid for, all the recipient has to do is enter an address to claim it. This method of handing out sweeteners is popular. It is considered "safe," because sender and receiver do not meet directly. According to the Communist Party-controlled People's Daily newspaper, the practice is "unfortunately catching fire."

The price is right

The government has clamped down on gift-giving as part of a broader effort to stamp out corruption. Senior and rank-and-file party members have been told to avoid unnecessary inspections, shorten meetings, simplify documents, scale back study tours, reduce security, shorten press releases, refrain from offering calligraphy to the companies they oversee (in exchange for money), and promote thrift.

Fancy flower arrangements and fruit plates are no longer seen at central and local government meetings; attendees must make due with a bottle of mineral water. Year-end and New Year parties paid for with public funds are banned. Companies are reluctant to openly send expensive presents to officials on holidays such as Lunar New Year, the autumn harvest festival and the anniversary of the founding of the People's Republic.

Since the austerity order was issued, 30,420 party members and others have been punished for violations, or about 80 per day on average.

The crackdown has sent a shudder through officialdom and left companies wondering how to go about establishing vital connections with public officials and other companies. By tradition, cementing these relationships often involves the giving of gifts.

People are already finding ways around the restrictions. Small businesses in northeast China, for example, will buy a winning lottery ticket with a 500,000 yuan payout for 600,000 yuan and give the ticket to a favored official. There is no paper trail and even if a company is caught, it can say it was only giving away a 2 yuan lottery ticket. 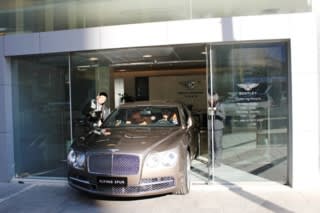 Sales are slow at this Bentley dealership in Shenyang, Liaoning Province, due in part to a government austerity drive.

The austerity drive has hit sales of U.S. and European luxury goods. Ermenegildo Zegna, an Italian men's fashion label popular with Chinese bureaucrats, is suffering. There is less demand for its custom-tailoring gift certificates.

Many people had thought the austerity drive would be short-lived, but it has dragged on. The givers and receivers will be hoping the killjoys in the Chinese leadership turn their attention elsewhere.