LUANG PRABANG, Laos -- After years of clawing at the door, low-cost airlines are finally breaking into this scenic temple-strewn town on the Mekong River.

Thai AirAsia begins a new Bangkok to Luang Prabang route in late March, HK Express has said it will add a Hong Kong flight and two more airlines are awaiting approvals for their routes. As a result, Luang Prabang's international air traffic could nearly double by the end of the year, according to CAPA-Centre For Aviation, an advisory and research group.

Amid an ongoing tourist surge, the new flights are being greeted in the once sleepy town with a mixture of excitement and anxiety. 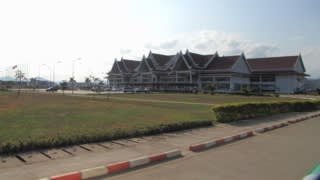 The Unesco World Heritage site has fought to preserve its calm atmosphere, with a nightly curfew and strict curbs on development in the Unesco-protected parts of town. More than 445,000 international visitors came to Luang Prabang in 2015, according to the provincial tourist department, a leap of more than 10% on the previous year.

"Here we always welcome tourism, just [we] have to prepare ourselves -- the facilities and the amenities, we have to welcome them," said Soudaphone Khomthavong, the deputy director in charge of tourism for Luang Prabang province. "This is something we are very concerned about and have to pay attention to."

While many visitors arrive by bus -- there is no train service -- air traffic has been limited into Luang Prabang's small airport.

A runway expansion in 2012 allowed bigger planes in, but with national flag carrier Lao Airlines the dominant airline, only three other international airlines were allowed in to Luang Prabang -- none of them a low-cost carrier. Thai AirAsia's entry, announced with fanfare in February, came after eight years of trying.

It appears to have opened the low-cost floodgates. 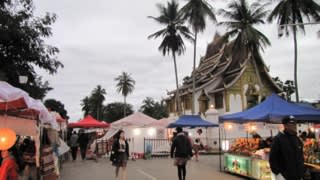 HK Express will add a service from Hong Kong later this year. Soudaphone said SilkAir, a regional subsidiary of Singapore Airlines, and Malaysia AirAsia want to break in as well. Officials also are talking about expanding the airport, but Soudaphone said no final decisions have been made.

Brendan Sobie, Singapore-based chief analyst for CAPA-Centre For Aviation, said the government is likely to grant entry to all four airlines as it moves to capitalize on Luang Prabang's tourist draw.

"It has been underserved for a long time," Sobie said. "People know about it, but a lot of people haven't necessarily visited because AirAsia doesn't fly there and some people rely on [low-cost carriers] to fly around Asia ... . It has always been kind of a market that had huge potential."

Laos is the second smallest international air market in Southeast Asia, narrowly ahead of the tiny state of Brunei, noted Sobie. Flight growth in Luang Prabang has been relatively flat in the past couple of years, and the capital city Vientiane still has far more traffic.

But with potentially four new airlines and more expected Lao Airlines flights, the number of international seats per week at Luang Prabang International Airport could surpass 20,000 by year-end, up from 11,500 seats now.

Thai AirAsia started its push with promotional fares of 990 baht (a little more than $27) on one-way flights from Luang Prabang to Bangkok's Don Mueang International Airport. Tickets now typically range from $45 to $60 each way for advance bookings, a fraction of the usual fares for full-service carriers. According to a Thai AirAsia spokeswoman, bookings are on target for an 80% load factor on the route.

The changes come as Lao takes on the rotating chairmanship of the Association of Southeast Asian Nations this year, and thus steps further into the international spotlight. Opening its skies is for Lao a step towards full integration into the new ASEAN Economic Community, and a chance to bring in more tourist dollars to help meet its big goal of getting off the United Nations' least developed countries list by 2020.

While there is a clamor for more flights, government approvals remain slow for fear of overwhelming the small airport before it can be expanded and of injecting too much supply into the market too quickly. "For now, it seems like they're open, but they're also being quite careful about it," Sobie said of the Lao government.

Among Southeast Asian travel hubs, Laos has long been in the shadow of neighbors such as Thailand and Vietnam. Luang Prabang became a more exclusive destination in part because it is more difficult and expensive to get to. 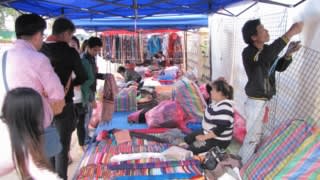 Tourist industry veterans expect low-cost flights to bring with them more budget travelers, but that is not always the case. Visitors arriving on the new Thai AirAsia flights have booked rooms at the high-end Sofitel and 3 Nagas hotels, according to a reservations manager, an indication that money saved on flights might end up circulating in the local economy.

Vacancies are already low in high season, and new hotels continue to rise to meet fresh demand as word has gotten out around the globe about Luang Prabang's stunning scenery and laid-back charms. Much of the new investment is from China, as Chinese visitors to Luang Prabang overtook Thai as the most common nationality in the first three months of 2016.

The bigger concern among longtime residents is not the availability of beds, but the atmosphere.

"On one hand, it's a positive thing that those families benefited from a major injection of funds into their households," said Gabriel Kuperman, who runs the annual Luang Prabang film festival and has lived in the town for eight years. "On the other hand, now that there are fewer and fewer Lao families living in the heart of Luang Prabang, a certain amount of charm has been lost."

One of the top tourist draws is the dawn alms giving, when young novice monks in saffron-colored robes walk the streets to accept small gifts of food from pilgrims. The quiet ceremony is a guide book and tour company must-do, and as a result each morning the main road in a portion of the old town is jammed with camera-wielding foreigners capturing the scene.

Signs in six languages asking visitors to "respect the alms giving," implying that the monks need some space, are routinely ignored.

Though large buses are prohibited from the main part of town, tourist vans can be a concern around some of the main temples and the Royal Palace.

The tourism boom is indeed good for the industry's bottom line. But Andrea Vinsonneau, of EXO Travel, worries about "killing the hen that lays the golden egg" if the town's charm disappears. For example, she tries to take tourists to less well-trodden locations to watch an alms giving ceremony and to lead cycling tours instead of moving visitors around in vans.