Residents to get HK$10,000 after triple whammy of coronavirus, protests and trade war 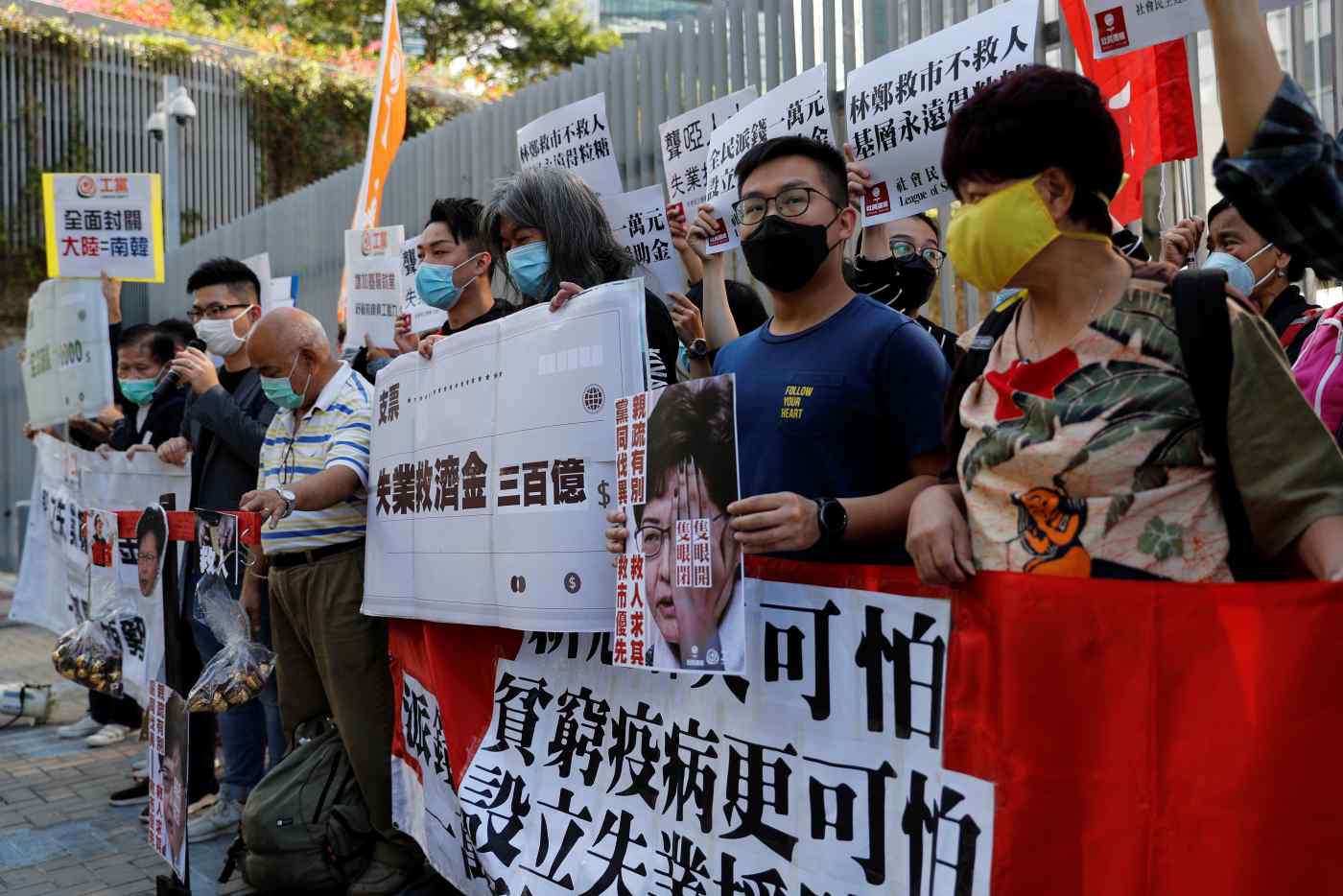 HONG KONG -- Hong Kong is bracing for budget deficits for the next five years as the economy suffers under the weight of the new coronavirus outbreak, anti-government protests and the U.S.-China trade war.

Hong Kong's government on Wednesday said the budget deficit is on track to reach a historical high of 139.1 billion Hong Kong dollars ($17.9 billion), or 4.8% of annual gross domestic product, for the year ending March 2021, more than double the deficit for the 2001-02 fiscal year, which was the largest ever recorded.

The announcement follows a series of relief measures, costing HK$120 billion, including a one-off cash handout of HK$10,000 to all permanent residents 18 years old and above, business subsidies and tax cuts.

For the current fiscal year ending March 2020, the government said it would record a deficit of HK$37.8 billion, its first shortfall since the SARS crisis. Forecasts for 2020 GDP range from contractions of 0.5% to 1.5%.

The financial hub last posted a budget deficit in March 2004 of roughly HK$40 billion in the wake of the severe acute respiratory syndrome epidemic. 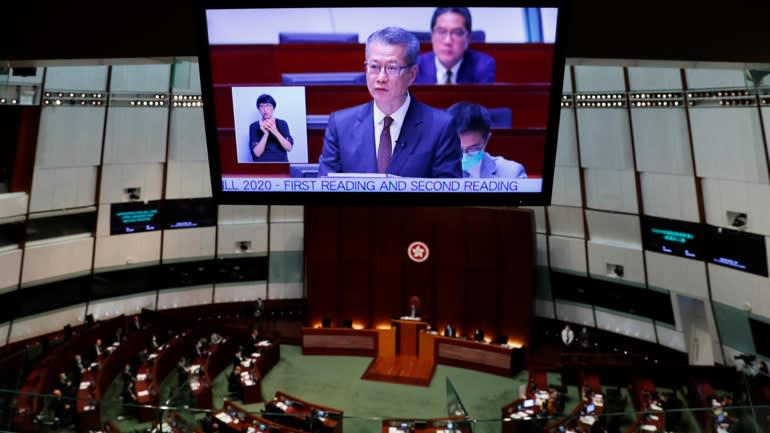 Financial Secretary Paul Chan, who said the government "will introduce aggressive countercyclical measures to help everyone through this difficult time," delivers his annual budget at Hong Kong's Legislative Council.   © Reuters

"The current crisis is likely to take a greater toll than in SARS," Financial Secretary Paul Chan said in his budget speech on Wednesday. "But Hong Kong's core competitiveness remains solid. We will introduce aggressive countercyclical measures to help everyone through this difficult time."

Despite the huge deficit, Hong Kong's ample fiscal reserves allow it to continue pumping in stimulus to shore up the economy. At the end of 2019, Hong Kong was sitting on reserves of HK$1.12 trillion, or roughly $144 billion, one of the world's largest.

The city's government has earmarked HK$30 billion in the coming fiscal year to provide financial aid to citizens and businesses affected by the coronavirus outbreak, after rolling out a HK$35 billion stimulus package last year amid the monthslong anti-government demonstrations.

Specific measures include one-off subsidies of HK$80,000 to HK$200,000 to retailers, restaurants and travel agencies -- industries hit hardest by the slump in inbound visitors and the economic downturn. For the period of November to January, these sectors saw a combined unemployment rate of 5.2%, compared with 3.4% for the whole of Hong Kong. The government is also offering a full guarantee on loans for companies to pay wages and taxes.

Other measures on the table include plans for affordable housing, funding for innovation, as well as assistance for low-income residents.

"I think the measures could be effective to boost consumption," Tommy Wu, senior economist at Oxford Economics, told the Nikkei Asian Review. The HK$10,000 cash handout for millions of citizens is equivalent to 2.5% of GDP, he estimated, and the cuts to personal and corporate taxes are also "quite sizable."

"If the benefits from the cash handouts and tax cuts are distributed this year and everyone spends them this year, the economic boost could be 0.5% to 1% of GDP," he said.

But other economists believe that the government's measures were made partly out of "political consideration" amid rising social grievances following the anti-government protests, which began last June.

"Generally speaking, cash handouts are not the best way to redistribute wealth from a public-finance perspective," said Billy Mak Sui-choi, associate professor at Hong Kong Baptist University. After years of failed attempts, however, both Hong Kong people and politicians have realized that the government is unable to resolve such issues as a shortage of housing and medical resources in the short-term, he said.

Property developers in Hong Kong have cut rents by as much as 60% at major shopping malls to support businesses and protect jobs, while banks are allowing mortgage borrowers to make interest-only payments for up to a year.

Hong Kong entered a technical recession in the third quarter of 2019, with annual GDP contracting 1.2%, compared with the same period a year earlier, marking the first decline since the global financial crisis a decade ago. Meanwhile, exports sank 22.7% in January from a year earlier.

In the long-run, the Hong Kong government must reduce its reliance on land sales and stamp duties for revenue, which has proved to be unsustainable when the economy slows, William Chan, tax partner at Grant Thornton Hong Kong, said.

"A major tax reform to diversify revenue stream is necessary," he said. "Otherwise there will be a structural deficit in five to 10 years."

In a news conference after his speech, Chan said he will "look into all ways" to increase government revenue in the long-term, including introducing new types of taxes and adjusting tax rates.

The government's work in achieving fiscal balance is "very high" on its agenda, he said.