HONG KONG -- Hong Kong's long reign as the pinnacle of free-market values has come to an end thanks to last year's anti-government unrest, with the Heritage Foundation crowning Singapore on Tuesday as its new global champion.

The conservative U.S. think tank has been ranking the world's economies on "economic freedom" annually since 1995.

Hong Kong, until now, has always been at the top, an endorsement often highlighted by the city's investment recruiters. But months of clashes between police and protesters, touched off by a government proposal to allow the extradition of criminal suspects to mainland China, took their toll.

In the new rankings, Heritage trimmed Hong Kong's overall score by 1.1 points to 89.1, where 100 represents perfect freedom, while Singapore's remained unchanged at 89.4.

"We are naturally disappointed that Hong Kong, which held the world's freest economy title for 25 successive years, has dropped to No. 2," a government spokesman said.

"But we welcome the foundation's continued recognition of Hong Kong's various strengths and its awareness that the territory remains a dynamic global financial center with a high degree of competitiveness and openness." 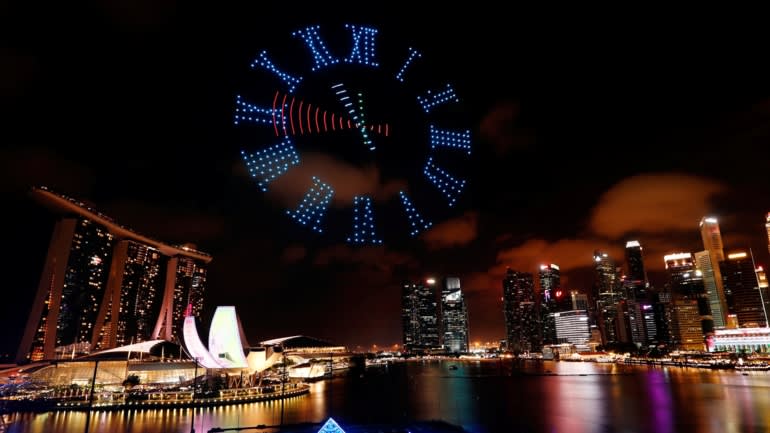 A countdown clock formed by drones hovers over Singapore on Dec. 31. Heritage officials in 2019 warned that Hong Kong was in danger of falling behind Singapore due to a reduced score for "judicial effectiveness."   © Reuters

While the rankings had been unveiled in annual news conferences in Hong Kong in recent years, this time the group plans an online launch of the index, which may be because of travel restrictions related to the coronavirus outbreak.

At the 2019 event, Heritage officials had warned that Hong Kong was in danger of falling behind Singapore due to a reduced score for "judicial effectiveness" that year.

Ultimately, however, the group gave Hong Kong a higher score in that area and several others in its new rankings, but the city lost considerable ground in "investment freedom" and "monetary freedom."

While "investment freedom" generally measures regulatory restrictions, it can also include a penalty for "security problems... or other government policies that inject a considerable degree of uncertainty," Heritage's study said.

Hong Kong's spokesman said: "While the local social unrest and turbulence in the past year, and how these were perceived overseas, might have affected Hong Kong's score in the investment environment, we must stress that Hong Kong's institutional strengths are unscathed and our underlying fundamentals remain strong."

It is unclear what affected Hong Kong's "monetary freedom" score, which considers inflation and government manipulation of prices.

New Zealand ranked No. 3 globally, while Australia overtook Switzerland to capture the No. 4 spot. Taiwan slipped a place to No. 11. The average score for Asia-Pacific economies improved to 61.1 from 60.6.

Within the region, Kazakhstan overtook Thailand and Indonesia, while its neighbors Uzbekistan and Kyrgyzstan also gained. Vietnam climbed over Cambodia, Sri Lanka and Bangladesh, while Afghanistan jumped over Myanmar and Nepal.