HONG KONG -- Hong Kong recorded a decline in its population last year for the first time in 17 years, as the city logged more deaths than births due to the coronavirus pandemic, a persistently low birthrate and an increase in emigration in light of a new national security law.

The financial hub's population fell to 7.47 million in 2020, a 0.6% decrease from a year earlier, the Census and Statistics Department said on Thursday in its annual population report.

Meanwhile, Hong Kong's unemployment rate in January rose to a three-month rolling average of 7%, up from December's 6.6% reading. The figure is close to the high reached in 2003 when the city was recovering from an outbreak of severe acute respiratory syndrome.

Amid the current pandemic, the number of births in Hong Kong dropped 18.5% to 43,100 last year, while 49,800 people died during the period, leading to what the government described as a "natural decrease" in population, the first such decline since 1961, when reliable figures started being recorded.

In 2003, Hong Kong recorded a population decrease due to more people moving away from the city than moving in, described as "net movement." 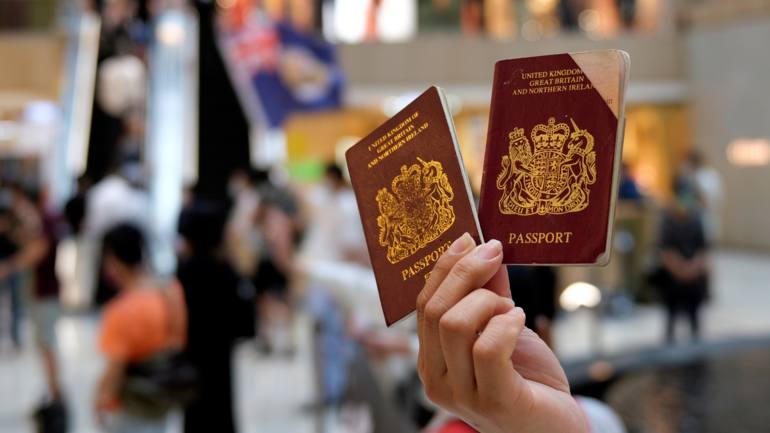 As many as 322,400 Hong Kong residents are estimated to move to the U.K. over the next five years after it opened a new immigration path for British National (Overseas) passport holders.   © Reuters

According to a separate government forecast, about one in four people in Hong Kong will be over the age of 65 by 2026.

The number of mainland Chinese settling in the city last year to reunite with family members plunged 74% to 10,100 due to border controls and quarantine measures, while 49,900 Hong Kong residents moved away, resulting in a net outflow of people.

The Hong Kong government played down the scale of emigration.

"Net movement, which includes the movement of Hong Kong residents into and out of Hong Kong for various purposes, including work and study, is conceptually different from immigration and emigration," a government spokesperson said in a statement. "Being an international city, Hong Kong's population has always been mobile."

Although local authorities do not issue figures on citizens who emigrate, applications for a "certificate of no criminal conviction" -- a document usually required for immigration elsewhere -- jumped 43% to 33,000 in 2019, the latest available figure, compared with 2018.

As many as 322,400 Hong Kong residents will move to the U.K. over the next five years after it recently opened a new immigration route for the city's British National (Overseas) passport-holders, according to estimates by the U.K. Home Office. Canada recently followed the U.K. in relaxing its immigration measures for Hong Kong people.

The moves follow the imposition of a national security law in Hong Kong by Beijing last June following massive anti-government protests in 2019. The protests and restrictive law have prompted many to consider leaving the city for good.

The former British colony has long been reliant on immigrants from mainland China for population growth.

Since the city returned to Chinese rule in 1997, at least 1.5 million people have moved from the mainland to Hong Kong.

Correction: An earlier version of this article and headline incorrectly stated that Hong Kong's population declined for the first time since records began in 1961.