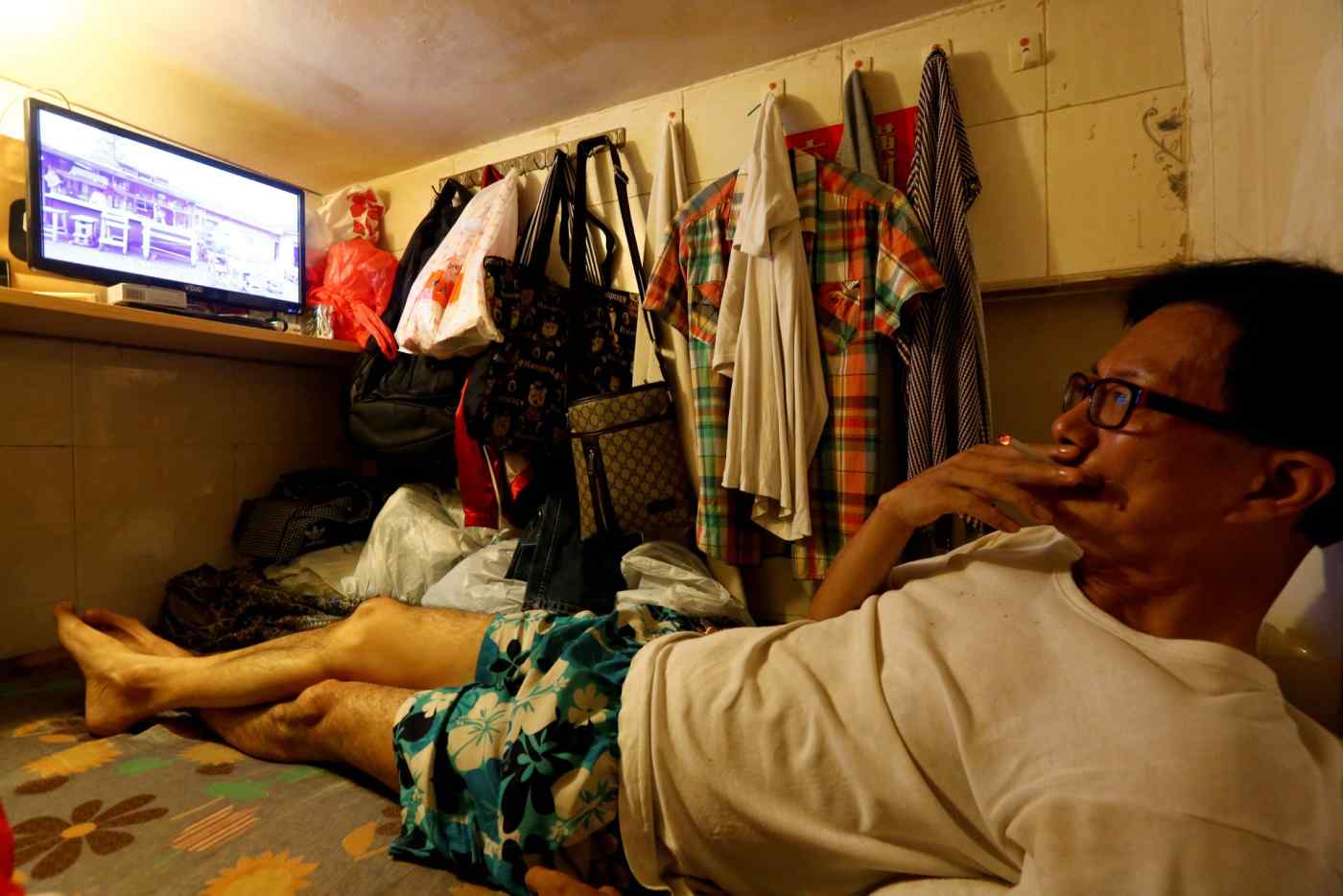 HONG KONG -- A new type of extremely small apartment could be a glimpse into the future of life in Hong Kong, as the territory's housing shortage grows more acute and prices soar.

To address the problem, Hong Kong announced a new set of measures at the end of June. These include a vacancy tax on empty new homes and cuts in sale prices of public housing.

Critics of the move question whether the measures will slow soaring property prices and make houses affordable to people in general.

One resident, Ms. Fui Tju, 56, divorced four years ago and now barely subsists on the 9,000 Hong Kong dollars ($1,147) per month she earns as a janitorial worker. Desperate to find an affordable place to live, she eventually settled in one of the extremely narrow living spaces known locally as "coffin homes."

The unit is so narrow it can accommodate only a bed and a container for her belongings. The unit was created by dividing an apartment into small sections. Tenants must share the kitchen in the bathroom.

According to the government, there are some 9,300 such narrow apartments housing more than 200,000 people in the former British colony.

"In Hong Kong, residence rights, one of the fundamental human rights, are being ignored and we want you to know the serious reality," said Gordon Chick, in charge of housing assistance at a non-governmental group Hong Kong Society for Community Organization.

Hong Kong suffers from its chronic land shortage because some 7.3 million people live in a space roughly half the area of Tokyo. All land in Hong Kong is owned by the government, which auctions leasehold rights. The government decides whether to make new housing lots available.

The government earns 30% of its total revenue from the real estate market, and it protects the revenue source by adjusting supply to prevent declines in property prices.

Victor Li, chairman of CK Asset Holdings, said the government "should boost land and flat supplies as a long-term strategy."

The government plans to introduce a vacancy tax in an attempt to discourage developers from hoarding new homes. To justify the measure, the government pointed out that the property market has as many as 9,000 empty new apartments.

But the new tax applies only to new homes and does not cover homes for resale.

"The vacancy tax will have little effect to the property market, as the vacancy rate in Hong Kong is one of the lowest globally. That is only an eye-catching policy, while what really helps in the long term is certainly increasing land supply," said Alan Jin, head of property research at Mizuho Securities Asia.

In short, the business community and the government are blaming each other for the housing problem.

While real estate in Hong Kong accounts for nearly 20% of its gross domestic product, the combined market capitalization of the top four local real estate companies has increased by some $4.52 billion over the past year. Continuously rising property prices have shored up the Hong Kong economy and brought prosperity to the autonomous Chinese territory.

But Hong Kong can no longer conceal flaws in its distorted economic structure. Some experts say the housing market is in a bubble, as prices have tripled in the past decade.

A civil group survey found that 53% of women in their 20s to 40s in Hong Kong do not want to have children. The acute housing shortage was the No. 1 reason.

The business community is starting to complain that the shortage of dwelling units weakens the city's competitiveness.

Expanding income gaps are a common problem around the world amid ongoing globalization. But the housing problem in Hong Kong cannot be brushed aside as merely a "sign of the times."

"Housing problem is the top priority in my agenda right now," said Hong Kong Chief Executive Carrie Lam. Lam, who hammered out the vacancy tax and other measures to address the housing problem just before she finished her first year in office, still has hopes for the future of Hong Kong and its people.