BANGKOK -- Sukul Sangdee, a 58-year-old community leader in a rice-growing village in Thailand's northeast, knows his fellow farmers well. Every so often, he sees unfamiliar men at a noodle shop near his house. "They are loan sharks coming to collect money," he said.

Some of his friends in the village, not far from the city of Ubon Ratchathani, were put in a precarious position when the Yingluck Shinawatra government failed to pay cash for their crops in the fall of 2013. The payments had been promised under Yingluck's rice purchase program. The government wiggled out of its obligation by issuing IOUs in exchange for the rice.

Sukul's friends had used up their bank credit limits and were counting on prompt payment. "My friends needed money to keep on living, so they turned to those other lenders," he said.

The military junta made the overdue payments to the farmers within a month of the coup in May 2014, "but it was too late," Sukul said. The informal lenders charge interest of 15-20% per month. His friends are having a hard time keeping up with the monthly fees of more than 20,000 baht ($596).

A bubble made by politics

Sukul points to politicians as a reason why the farmers had maxed out their bank credit in the first place. "Starting from Thaksin [Shinawatra], the government encouraged farmers and shop owners to borrow money to invest," he said. "Some people borrowed unnecessary money and bought cars and motorbikes instead."

So-called Thaksinomics -- economic policies that Thaksin's sister, Yingluck, continued after the former prime minister went into exile -- featured subsidies and increased lending to lower-income households. The initiatives involved commercial banks as well as state-owned financial institutions, such as the Government Savings Bank and the Bank for Agriculture and Agricultural Cooperatives. The result: The country's total outstanding loans swelled by more than 120% during the 10 years through 2014, while its nominal gross domestic product grew roughly 70% in the same period. 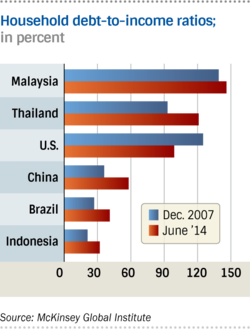 Imbibing all that credit has left Thailand with a hangover. Household debt stands at about 85% of GDP. More alarmingly, the debt amounted to 121% of household income as of June 2014, according to a report by McKinsey Global Institute. That is close to the 125% ratio in the U.S. right before the 2008 financial crisis; many economists believe the rate is still rising.

These statistics do not include debt owed to informal lenders.

Of the total bank loans outstanding at the end of March, the nonperforming rate was about 2.3% -- not particularly high compared with the 5%-plus seen in the U.S. during the crisis. Still, major banks are turning cautious.

Noriaki Goto, chief executive of Bank of Ayudhya, the fifth-largest commercial bank by assets in the country, said an uptrend in repayment failures indicates that the nonperforming loan ratio will keep rising toward 2016. The bank has raised the bar for taking out a personal loan; customers must now be earning at least 10,000 baht per month.

Kasikornbank, the nation's No. 4 bank by assets, is now rejecting 60% of retail loan applications, up from 45% a couple of years ago, according to Executive Vice President Thawee Teerasoontornwong. "Because debt is already over [households'] capacity to pay back, we cannot lend anymore," he said.

Banks' stances suggest that a deleveraging process is already at work in the Thai economy. Sufficient economic growth would make this process relatively easy, since rising household income would support debt repayment. Yet headwinds are gusting.

The country's seasonally adjusted, quarter-by-quarter GDP growth slowed to 0.3% in the January-March term, from 1.1% the previous quarter.

Another worrisome factor is disinflation -- a slowdown in the pace of inflation. This is mostly attributable to the decline in oil prices. The country's headline inflation rate was below zero for the fourth consecutive month in April. If this persists, household debt and interest burdens could increase in real terms. This would hinder new consumption and investment.

Supavud Saicheua, head of Thai investment bank Phatra Securities' research group, explained the key dilemma for the Thai economy. "We want slower domestic consumption and higher economic growth at the same time to solve the debt problem," he said. "The only way is to increase exports, which account for 60% of GDP, but we are having a global demand shortage, which is slowing our exports and spreading deflationary pressures around the world." 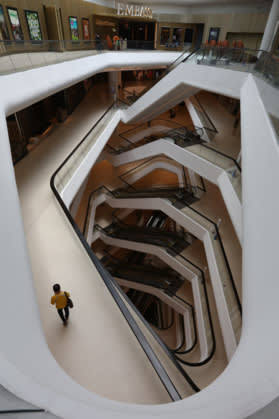 A visitor takes a lonely stroll through a shopping mall in Bangkok. (Photo by Ken Kobayashi)

When the U.S. Federal Reserve starts tightening monetary policy, as is widely predicted, it could seriously upset the global money flow. This could mean fewer policy options for governments and central banks of emerging economies like Thailand, which tend to fear rapid capital flight.

"The time window for easier monetary policy is limited," Supavud warned. If Thailand misses that window, it may face the kind of balance-sheet stagnation many developed economies have struggled with since the 1980s.