How ASEAN can stay relevant in next 50 years

Leaders must develop a unified and coherent strategy

A delegate at a meeting of the ASEAN Intergovernmental Commission on Human Rights, during the grouping’s foreign ministers’ summit in Myanmar in August 2014.   © Reuters
CopyCopied

In today's world, it is hard to forecast what will happen in the next five years, let alone the next five decades. It is clear, however, that the Association of Southeast Asian Nations needs to change its mindset from top to bottom if it is to remain a relevant international organization.

Given the hierarchical character of ASEAN, its future leaders must be more willing to share similar visions and concerns about the challenges ahead. They must also speak with one voice and act in unison. In the past, ASEAN leaders could get away with hedging their responses to emerging issues and pressures from outside powers. Since ASEAN is a regional intergovernmental organization without a common defense and foreign policy, its leaders have had some leeway to pursue their own instincts and national interests in responding to day-to-day crises. But the future is a different ballpark.

As the grouping moves toward a higher profile in the international arena its leaders must develop a more coherent and consistent approach, which will require greater discussion of joint interests and priorities. Some critics contend that there are already too many meetings -- in 2016 the group had nearly 1,000 at various official levels. But there is clearly a need for more focused gatherings to enable leaders and senior officials to iron out their differences and forge a common stance. 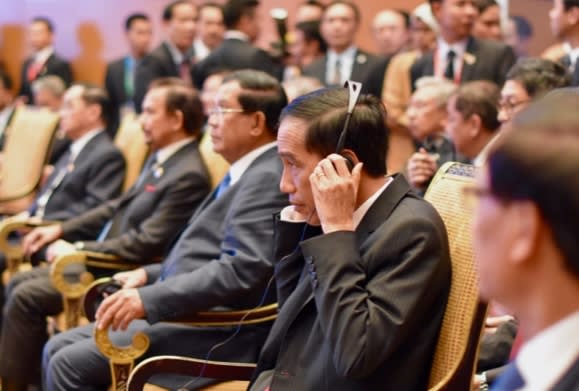 Indonesian President Joko Widodo seated alongside other ASEAN heads of government at the 2015 ASEAN summit in Kuala Lumpur. (Photo by Simon Roughneen)

Better pre-summit consultations at senior official levels are also important to prepare leaders for efficient and speedier decision-making. For the past five decades, the organization's leaders have met as a group for an average of less than five hours at each summit, much of which has been spent on protocol and diplomatic pleasantries. Where consensus is impossible, national leaders should allow the organization to pursue the majority view so long as no harm is done to their own countries' sovereignty or territorial integrity.

As the ASEAN Community becomes more integrated pressure is growing for implementation of the organization's long-standing vision of a "people-centered" community. Since the enforcement of an ASEAN Charter at the end of 2008 there has been intense debate about ways of utilizing bottom-up input from civil society and grassroots organizations without upending the top-down decision-making structure that has existed since the grouping was established.

Before ASEAN became a rule-based organization, a decade ago, more than 20,000 nongovernment organizations carried out their agendas without any attempt to liaise with broader action plans contained in the organization's three intertwined "pillars" -- political/security, economic, and social/culture.

ASEAN has laid down a clear vision for the next 10 years -- detailed in its blueprint ASEAN Vision 2015: Forging Ahead -- to transform itself into a responsive and inclusive community. The group's leaders need to live up to their pledges and also ensure that citizens of this ever-growing community will enjoy human rights in a just and democratic environment.

That is a tall order, but all ASEAN leaders have said they aspire to reach these ambitious objectives. With well over 500 priority areas already established across a range of fields, ASEAN leaders and stakeholders from civil society organizations need to work together to implement these plans comprehensively and with better cooperation and coordination.

Finally, ASEAN leaders agreed at a summit in Naypyitaw in 2014 to embrace the concept of a "people-oriented and people-centered community" as an objective covering all policies impacting on the 10-member organization. It is hoped that this approach will enable the grouping's leaders to engage in dialog with civil society leaders who are recognized and respected by member countries. Past experience points to a lack of adequate preparation on both sides in the absence of mutual respect and understanding of their respective and distinctive roles. Sandwiched between the leaders and these grass roots organizations is the Jakarta-based headquarters of ASEAN. For the time being, its leader, Secretary General Le Luong Minh, has no mandate to speak on behalf of ASEAN or to act on common issues without consensus agreement among the member states. With a budget of less than $20 million a year the secretariat has to prepare and run hundreds of meetings and deal with myriad issues and crises confronting the organization.

Better funding and more staff are critically needed. In the future, whoever leads ASEAN from Jakarta must have a broader mandate to determine the organization's course of action in responding to as-yet-unknown challenges. On certain agreed issues, he or she should be able to make decisions on ASEAN's behalf.

To improve overall efficiency within ASEAN, larger financial contributions from prosperous members will inevitably be needed, without changing the underlying one-member one-vote system. Better management of the estimated 300 ASEAN staffers -- a number that needs to be doubled to cope with the future workload -- is a most urgent issue. With increased engagement with external parties, the secretariat needs capable officials who can provide forecasts involving international trends and the emerging policy environment.

As the ASEAN Community enters its third year, the 640 million or so citizens of the region have become more demanding, as well as fearful of uncertainties brought about by increased internal connectedness as well as those emanating from wider global problems. It is time for leaders to understand that ASEAN can only thrive if its people are satisfied that they are more than pawns in the hands of ineffective and rudderless governments.

Kavi Chongkittavorn is a senior fellow at the Institute of Security and International Studies at Chulalongkorn University in Bangkok.