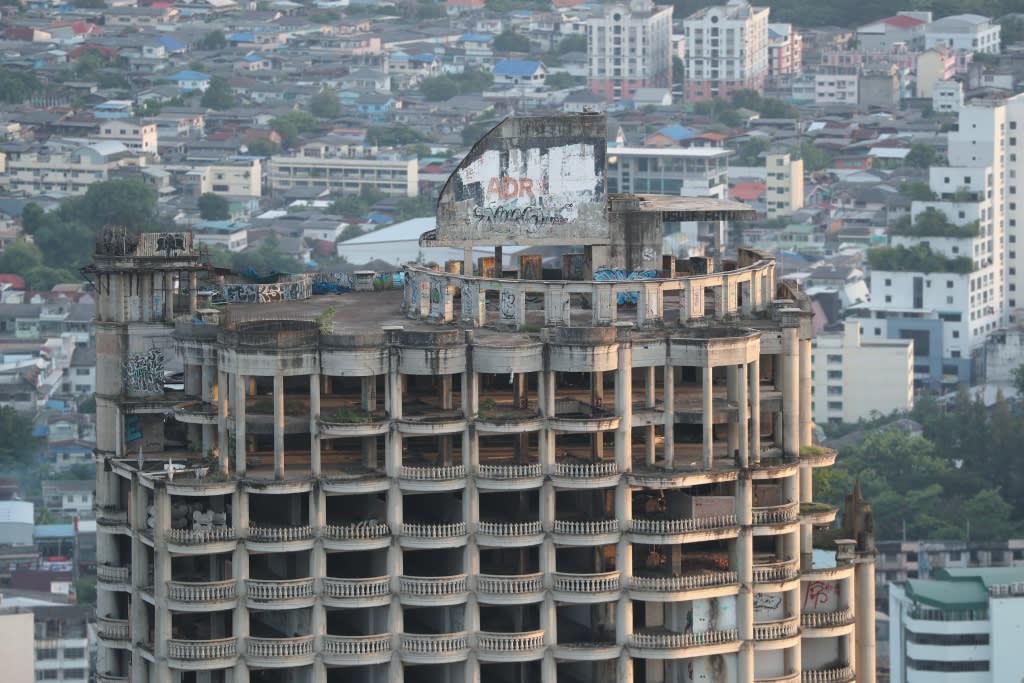 TOKYO/BANGKOK -- Overlooking the Chao Phraya River that flows through Bangkok stands a 49-story high-rise covered with mold and graffiti. Infamously known as the "Ghost Tower," the structure has so deteriorated under the harsh tropical conditions that its fate now could be demolition.

The 600-unit Sathorn Unique condominium project is one of the 300 or so major office, hotel and apartment developments in Bangkok that failed after the 1997 Asian financial crisis. Today, only a handful of those projects remain, standing as stark reminders of the economic chaos of two decades ago -- and how far the economy has come.

June 2 marks the 20th anniversary of the crisis. On this day, the Thai government became unable to maintain its currency peg to the dollar, and the baht crashed. The contagion spread to South Korea and Indonesia. Governments fell and numerous countries had to be rescued by the International Monetary Fund, with conditions attached.

Financially, Asia is a different region than it was in 1997. But does that mean it is immune from another debacle?

For financial markets, seven seems to be anything but a lucky number. It was in 1987 that the U.S. stock market crashed on what later became known as Black Monday, when the Dow Jones Industrial Average plunged 22% in one day. And in 2007, America's subprime mortgage market began to wobble, leading to the collapse of the Lehman Brothers investment bank and the outbreak of the global financial crisis.

The financial contagion hit Asia in 1997. On July 2 of that year, the Thai government became unable to maintain its currency peg to the dollar, and the baht crashed. The crisis spread to South Korea and Indonesia. Governments fell and numerous countries had to be rescued by the International Monetary Fund, with conditions attached. 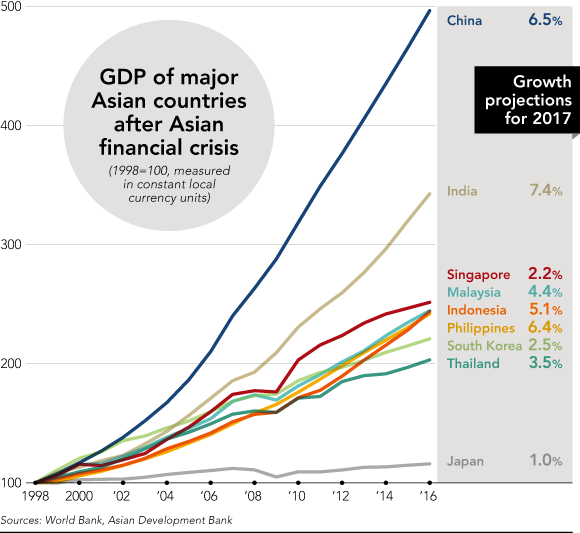 Twenty years later after the Asian financial crisis, we are again in an ominously numbered year. But 2017 has so far been kind to the Asian and global economies. The World Bank estimated in its Global Economic Prospects published in June that global growth will accelerate from 2.3% in 2016 to 2.7% this year, with Asian economies posting the highest growth.

Unlucky numbers don't seem to bother Bank of Thailand Gov. Veerathai Santiprabhob. "We have no concerns that a crisis similar to the one in 1997 could befall Thailand now, as there are many more safeguards in place and systemic fragility has been taken out of the system," he said.

Most experts agree that Asia's financial and economic systems have grown more resilient since the crisis. Thailand, Indonesia and South Korea have given up their currency peg to the dollar, a practice that had made their economies vulnerable to speculators, and most emerging economies in the region are no longer running current-account deficits, with many boasting vast amounts of foreign reserves.

The total reserve balance of five major economies in Southeast Asia -- Thailand, Indonesia, Malaysia, Philippines and Vietnam -- surpassed $500 billion at the end of 2016, five times more than in 1996.

Back from the brink

The improvement in Thailand, where the crisis broke out, is particularly impressive.

"Thailand's external position is strong, with a large current-account surplus and international reserves amounting to around 3.5 times of short-term external debts," Veerathai said. Today, Thai monetary authorities are concerned about a stronger currency, not a weaker one.

Fueling the baht's strength is a huge current-account surplus, equivalent to over 10% of gross domestic product. 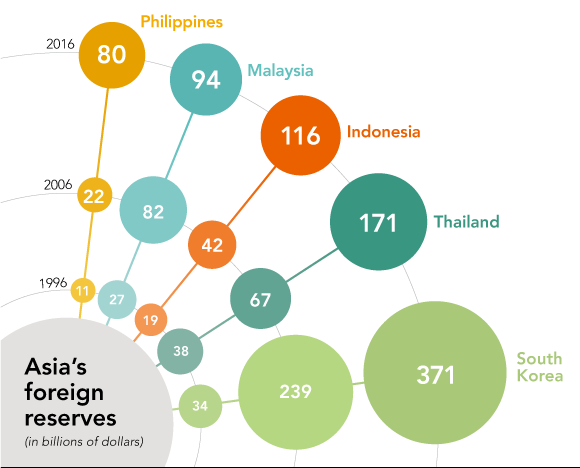 Before the 1997 crisis, Thailand was running a current-account deficit. In 1996, it came to $14.6 billion, as much as 8% of GDP. The central bank, however, pegged the currency at 25 baht to the dollar and attracted short-term foreign money by setting interest rates high. Thai banks and businesses used this flood of money to finance domestic investment projects, including luxury condominium projects like the Sathorn Unique.

But once people lost faith in the currency, the flow suddenly reversed. The Bank of Thailand tried to maintain the peg but soon ran out of foreign reserves. Thailand was forced to float its currency, and the baht crashed. The mismatch between Thailand's short-term dollar borrowing from overseas investors and its long-term investments at home in the local currency has been largely corrected. "Emerging economies in Asia and elsewhere were dependent on overseas debt when the crisis hit 20 years ago, but domestic financial institutions have improved and are increasingly providing credit" to domestic businesses, said Koji Sakuma, professor at Kyoto Tachibana University.

An Asiawide financial safety net has added a sense of stability to the overall system.

In the wake of the 1997 financial crisis, Japan's Finance Ministry proposed establishing an Asian Monetary Fund to help regional countries weather the crisis without resorting to the IMF. But the U.S. rejected the idea outright, pushing instead the Washington Consensus, a set of policy suggestions for developing nations drawn up by Washington-based institutions.

Nevertheless, Japan's idea eventually led to the establishment of the Chiang Mai Initiative, a multilateral currency swap agreement between the Association of Southeast Asian Nations, China, Japan and South Korea, in 2000. Though initially opposed, the U.S. government now supports Asia's efforts to build financial cooperation through measures like the CMI. But that does not mean there are no future risks. The obvious one is China. Between 1997 and 2017, its nominal GDP grew tenfold from 8 trillion yuan ($1.17 trillion) to 81 trillion yuan. President Xi Jinping has made it clear that the government will increase spending to prop up the economy until the Communist Party's key congress this fall.

In late May, the People's Bank of China changed the formula it uses to calculate yuan exchange rates in a bid to curb the currency's swings. This move goes against the promise -- made last year when the yuan was added to the IMF's basket of reserve currencies, known as Special Drawing Rights -- to loosen state control over the currency. It is also a sign of how concerned Beijing is about capital outflows.

Trapped in the domestic market, money is flooding into property and other assets, fueling fears of a bubble. The Chinese economy always elicits a mix of pessimism and optimism. But if this asset bubble bursts, its impact could far exceed that of the 1997 financial crisis, given how much Asia's dependence on China in terms of trade, investment and finance has grown.

The IMF earlier this month warned China that its economy faces growing vulnerabilities.

The Trump administration, which began in January, is also a potential threat to market stability. It is averse to multilateral accords, such the Trans-Pacific Partnership trade pact and the Paris climate deal, and instead pursues bilateral agreements aimed at lowering the U.S. trade deficit -- an approach that challenges the global framework for strong, sustainable growth.

The stock market cheered Donald Trump's election in November, and the party is still going. But hopes for the president's proposed tax cuts and infrastructure investments, which look unlikely to make it through Congress by the end of the year, are fading. After this summer, there will be a revival of the debt ceiling debate, which in 2013 led to a federal government shutdown. Eventually, markets may stop seeing only the good in Trump.

Another threat from the U.S. is rising interest rates. American rate hikes triggered capital outflows in Latin America in the early 1980s, leading to a debt crisis. A similar crisis hit Mexico in 1994.

The so-called taper tantrum is still a fresh memory for many market players. Emerging-market currencies took a sharp drive after then-Federal Reserve Chairman Ben Bernanke mentioned in May 2013 that the Fed would begin winding down its bond-purchasing program. The Fed has raised rates three times since December 2015, and markets largely expect another by the end of this year. The Fed is also expected to begin shrinking its bloated balance sheet.

The recent rate hikes have not caused as much market turbulence as during the taper tantrum. This may be because the markets have already priced in future hikes, but investors should perhaps pay a bit more attention to the fact that the Fed is very slowly turning off the taps.

Naturally, some nations will be hit harder than others by any eventual capital outflows.

When the taper tantrum struck Asia, Indonesia was affected most. The country is still feeling the effects, having logged a current-account deficit for five straight years through 2016. Residents of the Indonesian capital enjoy a day out on the streets in October 2015.   © Getty Images

Malaysia also lost a major chunk of its reserves during the taper tantrum, as its external position worsened amid the decline in oil prices.

The Philippines' ratio of current-account balance to GDP dropped for the third straight year to a marginal surplus last year. "Currencies of countries with current-account deficits are more prone to depreciate in case of a crisis," warned Koji Sako, senior economist at Japan's Mizuho Research Institute.

Also to bear in mind is the growing amount of dollar-denominated debt, which becomes harder to service as the local currency weakens.

Businesses in Southeast Asia, traumatized by the past crisis, now shy away from borrowing in foreign currencies. Their Chinese and South Korean counterparts, however, have continued accumulating foreign currency-denominated debt. That is partly because there are many large corporations able to procure funds from abroad, which they need in order to maintain sprawling overseas operations. But this risks creating the same sort of funding gap that was prevalent before the crisis.

Furthermore, a sizable proportion of the funds procured abroad is funneled into the booming property market in China, according to Mizuho Research.

In his 30-year career in finance and policymaking, Robert Zoellick experienced a number of crises firsthand, including during his tenure with the U.S. government and at the World Bank, where he served as president. Today, he cites two risks that could trigger the next financial crisis: an exit from extraordinary monetary policy and cybersecurity.

Unlike previous rate hikes, the Fed's current cycle also involves downsizing its now-bloated balance sheet. The European Central Bank and the Bank of Japan are next in line for the exit. Cybersecurity can also easily cause a crisis in today's financial markets, given the vast amounts of data being transferred every second.

No one can say exactly what form the next crisis will take. All that can be said for sure is that there will be one.