BANGKOK -- The global commentariat has dubbed Aug. 24, 2015, another "Black Monday." The original one -- Oct. 19, 1987 -- was a global equity collapse that culminated in a 22.6% drop in the Dow Jones Industrial Average. Substantial U.S. trade and fiscal deficits, military tensions in the Middle East, and the advent of program trading all contributed to that plunge.

This time, the epicenter was not the U.S. but a country where the stock market did not even exist three decades ago.

As Michael Kurtz, global head of equity strategy and chief Asia ex-Japan strategist at Nomura, said in an Aug. 25 note, fears of a Chinese "hard landing" appear to be the "principal culprit" behind investors' flight from risk.

Upon opening on the morning of Aug. 24, the Shanghai bourse was quickly bombarded by heavy selling. In less than an hour, the benchmark Shanghai Composite Index lost almost 300 points. Despite some brief rebounds during the day, the index closed at 3,209.905, down 8.5%. It was the steepest single-day drop since the 8.8% fall recorded Feb. 27, 2007.

Amid continued signs of a Chinese economic slowdown, investors were apparently expecting the authorities to introduce more aggressive market-supporting measures over the weekend. Disappointment over the lack of action seems to have triggered panic selling. Shares of index heavyweights such as Ping An Insurance Group and train manufacturer CRRC were sold to the 10% daily limit. Only five stocks gained value.

The plunge wiped out what remained of the Shanghai market's gain for the year, which stood at 60% in mid-June. Selling was rampant in Shenzhen, too, where the ChiNext index for startups lost over 8%.

The shock waves ripped through Hong Kong -- where the market opens simultaneously with other Chinese exchanges -- and spread worldwide.

The Taipei bourse, which starts up half an hour earlier, started feeling the pressure as soon as the mainland markets opened. By midday, the benchmark index was down 7.5%. Lee Chang-ken, president of local conglomerate Cathay Financial Holding, said his company was buying on the dip, saying, "When the market is panicking, it is a good time for institutional investors that want to hold stocks long-term to pick up undervalued companies." Nevertheless, the index hit its lowest level since November 2012.

Meanwhile, the Philippine Stock Exchange index saw this year's gains erased with a 6.7% plunge -- the sharpest drop since the "taper tantrum" in June 2013, when the U.S. Federal Reserve signaled it would curtail quantitative easing.

In India, central bank Gov. Raghuram Rajan sought to calm the markets as the Sensex dropped almost 6% and the rupee tumbled to its weakest point since late 2013. Rajan stressed the country's "fundamentals are strong."

The black baton was passed on to Johannesburg, Frankfurt, London and eventually New York to complete the cycle. The Dow at one point was down about 7%, though it ended the day with a 3.6% decline.

While some markets partially recovered on Aug. 25, Shanghai took another 7.6% plunge. "Sentiment will remain weak on China in the short term, as the economy is still showing signs of slowing down," said Helen Zhu, head of China equities at BlackRock. She added that "confidence in policymakers' ability to stabilize the economy has diminished."

Nikkei staff writers Debby Wu in Taipei and Rosemary Marandi in Mumbai contributed to this story. 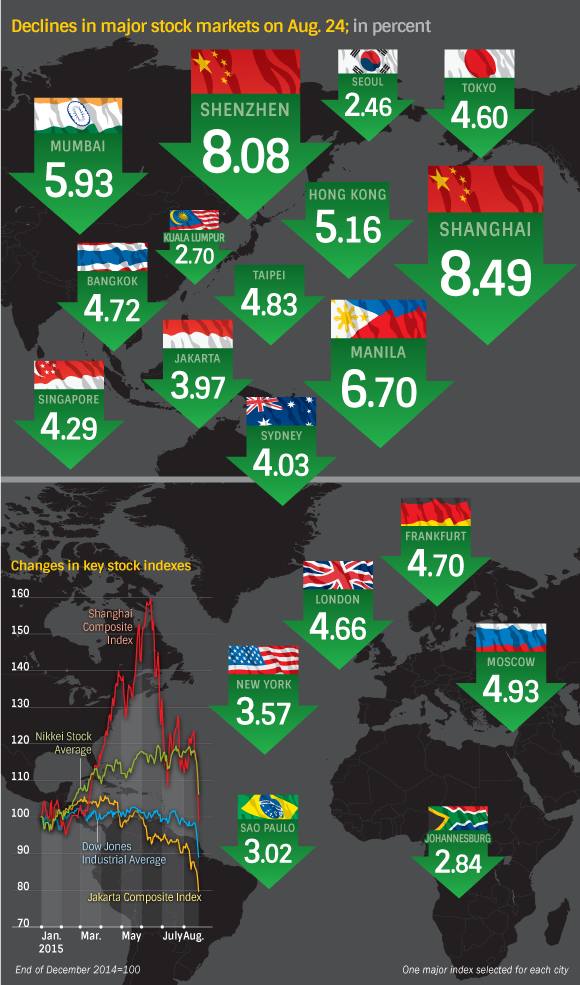