How Japan Inc. decided it had better start paying more

TOKYO -- Japan's economy has remained sluggish for decades now, but companies across industries are racking up record profits.

One way they have been able to manage this feat has been by cutting labor costs.

But things are changing, and executives are now being convinced that investing in their workforces is vital for long-term viability. 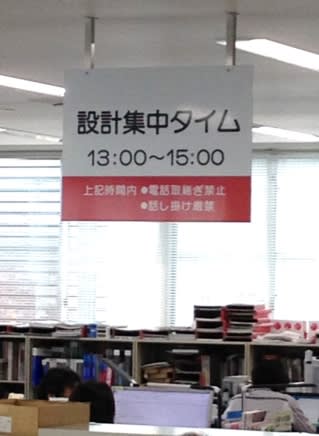 Workers at Daiwa House Industry's Toyama branch office set aside time to concentrate on design work. All other tasks are suspended during these periods.

Even investors are adjusting their strategies, placing greater weight on companies' labor policies.

Years ago, Daiwa House Industry was essentially forced to change the way it incentivizes employees.

In the year through March 2015, Daiwa House, one of Japan's leading homebuilders, switched the primary criterion for determining branch office worker bonuses from "profits per employee" to "profits per one hour of work by employees."

In the year through last March, Daiwa House workers logged about 20% fewer overtime hours than in the 12 months through March 2014, the last year when the old formula was used.

Daiwa House used to be known for having a "workaholic" corporate culture -- so much so that the labor standards inspection office issued it an advisory warning in 2011.

The company then decided to book some losses and pay back wages. On top of that, it feared it could end up being shunned by job-hunting college students.

Perhaps Daiwa House got a jump on the rest of corporate Japan, which finds itself in a bit of a fix as baby boomers retire en masse, and the country's working age population rapidly ages and shrinks.

The new dynamics have companies wondering how they can best attract the workers of tomorrow.

They also have companies taking labor productivity -- the amount of economic value produced by one hour of labor -- more seriously.

Toda, a construction company, has incorporated a unique productivity target into its business plan for a three-year period through the end of next March. It calls for raising total labor costs plus operating profits per employee to 13 million yen, up 13% from the year through March 2015. This could help the company raise wages and increase profits at the same time.

The company is also using a new labor productivity target to evaluate how its employees and branches are performing.

Toda is taking steps to make sure these targets will be met. Branches can no longer decide what orders they will accept; that task is now being done at the head office. The contractor has also introduced artificial intelligence to manage materials at construction sites.

The task is a difficult one. Raising productivity usually means getting more out of workers. But Japan's employees already find themselves left behind in terms of labor share.

Labor share is the amount of a corporation's "gross value added" that goes to workers. "Value added" is professorial way of describing what a company does to a product before handing it over to a customer.

Japan's labor share has been declining since fiscal 2012. Some economists argue this trend is the main factor behind the country's stubborn lack of inflation.

The decline in labor share stands in sharp contrast to a steady rise in profits returned to shareholders in recent years.

But now Japanese companies, especially those in service industries, are facing an increasingly serious manpower shortage.

This dearth will cause wages to go on an uptrend in the coming years. If Japanese companies fail to raise worker productivity, shareholders will eventually be left with sagging returns.

Investors are already staring at this predicament. Two and a half years ago, when the labor market was not as tight as it is now, a government-affiliated investment fund of a Middle Eastern country asked a Japanese brokerage to compile a list of companies with plans to deal with a shortage of workers. 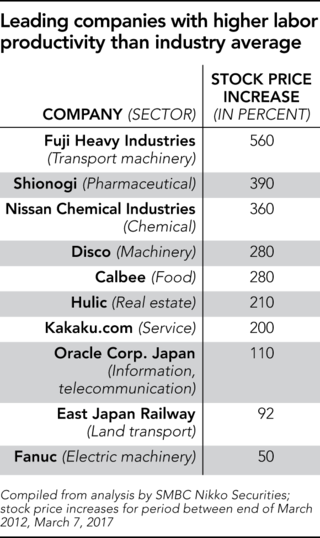 More recently, Masashi Akutsu, an equity strategist at SMBC Nikko Securities, used published data to calculate how productive major Japanese companies' workforces were in fiscal 2015. He then selected companies with higher productivity rates than the industry average and looked at how their stock prices performed during the previous five years.

Many of these companies' shares were on a steep incline. Fuji Heavy Industries, the maker of Subaru-brand cars, for instance, saw its shares soar almost sevenfold. The stock prices of Shionogi, a pharmaceuticals company, surged 390%. Nissan Chemical Industries enjoyed a 360% explosion.

During the same period, the Nikkei Stock Average rose 92%.

There is a clear correlation between steady labor productivity growth and an increase in return on equity, Akutsu concluded.

"Corporate investment in the labor market is crucial for Japan's economic growth," he said. "Investors should do their share to help companies in this respect."