How Singapore is going from trade hub to innovation hub Having built its fortune on global trade, Singapore is now looking to establish itself as the world’s leading center for innovation. (Photo by Ken Kobayashi)
TAKASHI NAKANO, Nikkei staff writerAugust 31, 2017 10:00 JST | China
CopyCopied

SINGAPORE Nyha Shree and Joe Tusin are each drawing up plans to expand their businesses in an office opened by U.S. digital payment platform PayPal in Singapore's Marina Bay area. Both run companies that make use of artificial intelligence -- Tusin's to detect illegal remittances and Shree's to point social media users in the direction of companies that sell items they like. Moreover, both get to work in a space where they can seek help from and collaborate with PayPal employees.

The Innovation Lab serves as both an incubation space and a core research and development center for PayPal. Employees and entrepreneurs can put together their ideas, technologies and facilities to create new products and services. The user-friendly and intuitive interface for PayPal's Home Screen app, for example, was designed entirely in Singapore.

This is just one of dozens of innovation labs in Singapore run by foreign companies, including Procter & Gamble, Unilever and Hewlett Packard Enterprise. French insurance company AXA is implementing a project at its Digital Hive innovation base to monitor what is being said about the company and its competitors on social media. Data scientists analyze the data to see which information should be provided to customers.

Shree relocated from Mumbai in March in the belief Singapore would be the best place to start a business. "There's no other country as innovative and supportive for startups," she said.

Among the government incentives offered to innovators are generous grants and other types of funding support, tax deductions for research and development investment, and expedited regulatory procedures. 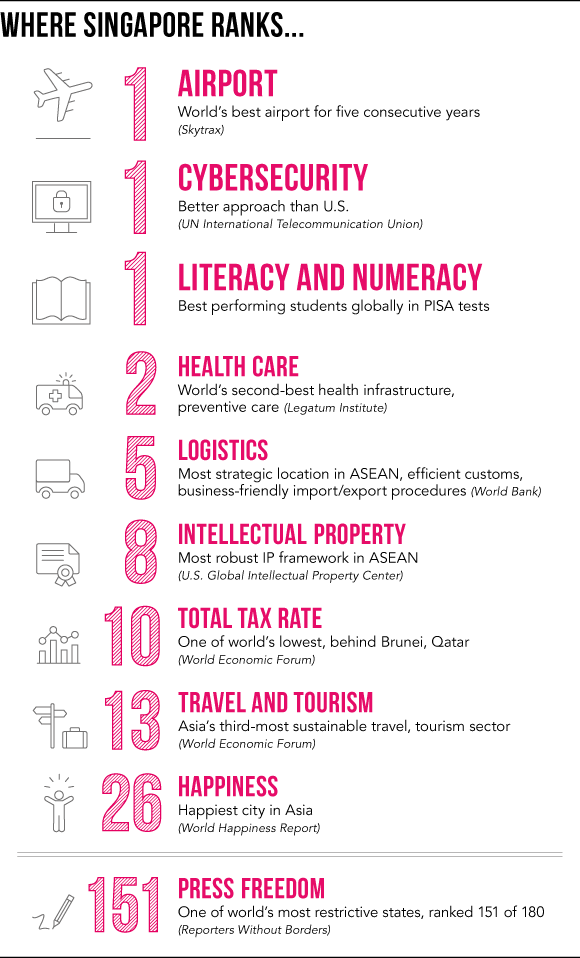 For a small country with little in the way of natural resources, the key to becoming a hub for anything lies in stripping away all unnecessary regulation to create an environment that draws money and talent from around the world.

Since its independence in 1965, Singapore has sought to do just that. It was a trade hub when manufacturing-sector exports led global growth until the 1970s. Then the city-state helped nurture industry clusters such as in semiconductors and finance. After the turn of the century, it reinvented itself again into a center of research- and knowledge-intensive industries.

Now Singapore is aiming to become a center for cutting-edge technologies such as AI, self-driving cars and robotics.

The Singapore Economic Development Board, founded in 1961, has played a central role in inviting foreign companies. "You cannot just depend on startups to drive your transition into an innovation-led economy," said EDB Chairman Beh Swan Gin, the man who invited PayPal and HPE to set up their innovation labs. "You need large corporations to be involved in starting new businesses." JOINT EFFORT Educational institutions like the National University of Singapore are also heavily involved in creating the ecosystem. Joytingle is one of a number of companies using Hangar, the establishment's on-campus startup space. It supplies Rabbit Ray, an educational toy that teaches children how injections help them get well and stops them being afraid of needles, to 40 hospitals in 11 markets.

Later this year, the company plans to release an app that helps people understand how injections work using augmented reality technology. "I want to be the first go-to name, to be the Disney of children's health care," said founder Esther Wang.

NUS has established partnerships with eight universities across the world, including Stanford in the U.S. and Israel's Tel Aviv University, and since 2002 has been sending students to venture comapnies near its partner schools for six months to a year under its Overseas Colleges internship program.

More than 2,000 students have benefited from the program, many of whom, like Veerappan Swaminathan, have gone on to start their own businesses.

"The local entrepreneur ecosystem is supported heavily by the former attendees of the NUS Overseas Colleges program," said the co-founder of Sustainable Living Lab, a startup that runs a shared space where entrepreneurs and engineers can gather to prototype ideas.

The makers' space in eastern Singapore is equipped with 3-D printers, laser cutters and various other gadgets that help inventors bring their ideas to reality. The space is offered to individual users for free, while the company remains profitable through a number of related businesses, including the design of similar spaces for corporations and educational institutions, like one at Google's Singapore headquarters.

Mohan Belani, one of the co-founders of e27, an online networking platform for entrepreneurs and investors, interned at a startup in Silicon Valley while studying part-time at Stanford under the program between 2006 and 2007.

Darius Cheung, who went there on a yearlong internship, is now a serial entrepreneur and the CEO of local property search portal 99.co. Prior to his current role, Cheung founded mobile security company tenCube which he sold to McAfee in 2010 -- at the time, one of the largest-ever exits by a Singaporean entrepreneur.

Others have put their expertise to use in corporate and government settings.

Ryan Lou now drives Oversea-Chinese Banking Corp.'s financial technology and innovation initiatives. He is a part of OCBC's Open Vault, a fintech-startup accelerator program. Having been to Stanford on the NUS program, Lou has now become the bridge between the startup and corporate ecosystems.

Before taking on the role at OCBC, Lou served as the assistant director of the fintech and innovation group at the Monetary Authority of Singapore, the country's central bank, as well as the technology manager for Singapore Telecommunications' innovation arm LifeLabs. All procedures at the airport’s fourth terminal will be automated. (Photo by Mayuko Tani)

MOVING TALENT For any country hoping to attract talent and investment, creating an efficient transportation system is a must, and Singapore is aiming to do so in typically Singaporean fashion.

Changi Airport will open its fourth terminal by the end of the year. All the procedures, from check-in and baggage drop-off to immigration, security and boarding, will be fully automated. Facial images taken at immigration will be used for identification at boarding gates, enabling the airport to reduce the number of staff it requires by 20%.

Many Asian airports are notorious for endless lines of passengers waiting to go through one procedure or another, but with the opening of Terminal 4, traveling through Changi will hopefully become a much less painful experience. Another terminal capable of handling 50 million passengers per year is slated to open around 2025, increasing the airport's total annual passenger traffic to 135 million.

Singapore- and Boston-based tech startup nuTonomy is aiming to make the city-state the first place in the world to start the commercial operation of self-driving taxis. Having succeeded in operating self-driving taxis with passengers on public roads last year, all the company needs now is for the government to revise laws to enable swift commercialization. "Singapore has adopted a very forward-leaning attitude," said Chief Operating Officer Doug Parker. "They have plans for autonomous vehicles in all facets of life, including buses, trucks, taxis and even park cleaning."

Being small enables the country to change direction swiftly, but it can also be a disadvantage. Asian regions are forming new cross-border economic zones like the Hong Kong-Zhuhai-Macau Bridge and the East-West Economic Corridor linking Vietnam with Myanmar.

"Size of immediate hinterland is quite important for a hub," said Manu Bhaskaran, CEO of Centennial Asia Advisors. "Hong Kong is not just a gateway to China, but also the Pearl River Delta, a very powerful economy." Changes to legislation will enable companies like nuTonomy to launch the technology commercially. (Photo by Shinya Sawai)

Singapore has been used as a hub by U.S. and European companies, but geographical proximity makes it less relevant for huge Chinese businesses. China has already become more innovative in some fields. "China has gone the furthest with e-payments," admitted Singaporean Prime Minister Lee Hsien Loong. "When visitors from China find that they have to use cash here, they ask: How can Singapore be so backward?"

The depth of innovation is also at stake. Developing intuitive apps no longer brings long-term profits. Startups around the world are competing with services featuring AI and robotics. Taking a superficial approach to these new technologies will undoubtedly lead to an early demise for many. In light of this, NUS plans to boost funding for Ph.D. programs.

Companies with ties to the government that are backed by sovereign wealth fund Temasek Holdings used to be the Singaporean economy's driving force, but this model is also changing. "We can no longer rely on government-linked companies but need to grow more indigenous startups," said Wong Poh Kam, director of the NUS Entrepreneurship Center.

Singapore needs more successful companies to lead the way -- someone, for example, who procures funds from private-sector venture capital, debuts on the Singapore Exchange and uses the cash from the IPO to expand into the rest of Southeast Asia. 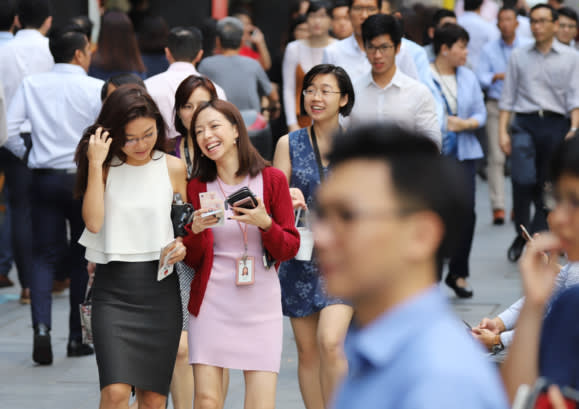 Singapore’s highly educated workforce is just one of the driving factors behind its vibrant startup scene. (Photo by Shinya Sawai)   © Shinya Sawai

But the number of companies listed on the bourse has seen a declining trend since the summer of 2013.

Success in innovation requires the kind of bold decisions and creativity that often clash with conventional social norms, meaning there are fundamental questions over how compatible a bottom-up economy can be with Singapore's traditional values of stability and obedience to a small, close-knit political elite.

The likes of Silicon Valley, Shenzhen and Tel Aviv are not going to stand by and wait for Singapore, and self-innovation will be crucial for the tiny country to stay attractive as a global innovation hub.

"We need a new mindset," said Deputy Prime Minister Teo Chee Hean in a recent interview with the Nikkei Asian Review. "Singaporeans are not sufficiently risk-taking," he said, adding that "the risk appetite needs to be increased."