Maia Santos-Deguito (right), testifies during hearing into money laundering at the Philippine Senate on Mar. 17.   © Reuters

MANILA -- Can a multimillion-dollar dirty money transaction be orchestrated by the manager of an ordinary bank branch? Rizal Commercial Banking Corp., the former employer of an RCBC Makati City branch head Maia Santos-Deguito, thinks it can. On March 22, RCBC fired Deguito, the woman who is swirling at the center of an $81-million bank heist -- the one successful part of audacious attempts by hackers to steal $951 million from Bangladesh Bank's foreign reserves at the New York Federal Reserve Bank in the U.S.

RCBC sacked its embattled employee amid ongoing investigations into the scandal by the Philippine Anti-Money Laundering Council and the senate. RCBC officials have suggested that Deguito independently authorized the transfer of the stolen funds into her branch. Deguito, meanwhile, has claimed that two other senior officials, including RCBC president and chief executive Lorenzo Tan, sanctioned the transactions.

"It's getting deeper and both sides are firing missiles at each other," Senator Teofisto Guingona III, who chairs the senate committee investigating the scandal, said on March 17, following a hearing during which Deguito told her side of the story in a closed "executive session" with senators.

The AMLC on March 11 sued Deguito before the Department of Justice for facilitating a money laundering offense. If found guilty, she faces imprisonment of up to seven years and a fine of up to 3 million pesos ($64,500).

Guingona said his committee needs to conduct more hearings before fully unlocking the truth of who is behind the heist -- all of which leaves RCBC investors hanging on anxiously.

"The recent performance of its [share] price went hand in hand with the investigations at the senate," said Charles Ang, an equity analyst at local brokerage COL Financial. "Investors are concerned about the potential repercussions and consequences of this issue."

The saga -- which began with the Feb. 4 hacking of Bangladesh Bank, that country's central bank -- can be traced back as far as May 2015, when five fictitious accounts were opened at the RCBC branch Deguito headed. With an initial deposit of $500 each, the accounts remained dormant until Feb. 8, 2016, when $81 million in wire transfers entered four of the five accounts from Bangladesh's foreign reserve account with the New York Federal Reserve Bank.

The money was quickly withdrawn and moved into another faked account within the same branch, before being transferred on to PhilRem Service Corp., a local remittance company, which in turn facilitated the transfer of the money to local casinos.

On Feb. 11, Bangladesh central bank governor Atiur Rahman (who has since resigned) alerted his Philippine counterpart, Amando Tetangco, to the heist, prompting the AMLC to launch a probe. But it was only on Feb. 29 that authorities filed a petition to freeze the bank accounts related to the transfers.

By the time the Philippine Court of Appeals ordered the accounts frozen on March 1, only $68,305 of the $81 million remained.

In the interim period, PhilRem delivered $30.6 million to a man called Weikang Xu over several days from Feb. 5 to 13. Another $28.8 million went to Bloomberry Resorts and Hotel, the company behind Solaire Resort and Casino. An official of Bloomberry said the amount was intended for Xu's casino junket operations. 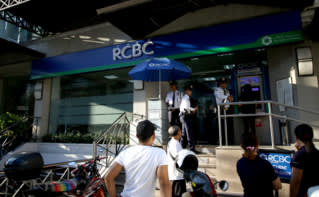 Wong, Deguito has claimed, is a friend of RCBC chief executive Tan, who at one point told his branch manager "to take care of that guy." Deguito told a senate hearing that she was "supposed to give him (Wong) preferential accommodation or treatment." Tan has denied Deguito's claims, including her statement that Tan recruited her from East West Banking Corp., a local lender, where she was described as a "star performer" for the business she brought in.

When President Benigno Aquino signed a law in July 2014 allowing the full entry of foreign banks into the Philippine market, RCBC was amongthe first to draw an outside investor. In September that year, a unit of Cathay Financial Holding, Taiwan's largest financial service provider by assets, announced the acquisition of a 20% stake in RCBC for $400 million, highlighting the Philippine lender's potential. Mid-sized RCBC,which holds a universal bank license, is controlled by the Yuchengco Group, a diversified conglomerate led by diplomat Alfonso Yuchengco. It is the country's eighth largest lender, with total assets of 410 billion pesos as of end-September 2015.

Since Tan, formerly of Citibank, joined the company in 2007, RCBC's deposits have doubled to 342.4 billion pesos, while its number of branches has grown to 456. Last year, the bank's total number of accounts jumped to 7.3 million from 6.7 million the year before. The bank also enjoys substantial clientele from Japanese and South Korean companies operating in the Philippines. From 2010-2015, the company received 93 different excellence awards.

Taiwan's Cathay Financial said it remains confident in RCBC despite the scandal.

"So far in 2015, we think the return from the RCBC investment was pretty good -- with annualized returns of about 6%," Lin Chao-Ting, executive vice-president of Cathay Life Insurance, told the Nikkei Asian Review.

"The heist case RCBC is involved in would not influence our confidence in the company," he added. "We think RCBC has a very decent management team, a lot of them coming from Citi."

Other Philippine banks have not been negatively affected by the issue, on the back of relatively solid fundamentals. According to FT Confidential Research, the capital adequacy ratio of 37 "universal" and commercial banks stood at 16.42% in the second quarter of 2015, well above the 10% required by the central bank. Universal banks provide both commercial and investment banking services.

However, the country's first cross-border dirty money scandal has exposed cracks in the Southeast Asian nation's banking and anti-money laundering regulations, as well as the as the lack of due diligence among lenders as deposits grow.

"I think the RCBC side may not execute thoroughly its internal control procedures -- they might need more disciplined staff training and more awareness of money-laundering/cyber theft from its employees," Lin said.

Casinos also remain excluded from the jurisdiction of the Anti-Money Laundering Act, which was last amended in 2013 to include lawyers, accountants, and precious stones and metals dealers.

At that time, new casino licensees were starting to develop the country's "Entertainment City," a gaming complex near Manila Bay, which is touted as the Philippines' answer to Macau. Casino lobbyists, Senator Sergio Osmena III said, used that project, among others, as a bargaining chip to exclude gambling houses in the anti-money laundering law's amendment.

Meanwhile, the scandal, which has been widely reported in foreign media, could also overshadow a string of reforms that Bangko Sentral ng Pilipinas, the central bank, has introduced to strengthen the banking system and lure more foreign lenders to the country. While the scandal did not hurt financial markets, the continuation of a business-as-usual attitude could harm the economy in the long run.

"We have to recognize that there is a risk associated with this and therefore we need to address that," central bank governor Amando Tetangco said.

Teresita Herbosa, chairwoman of the Securities and Exchange Commission in Manila and co-chair of the AMLC, said the heist jeopardizes the standing of the Philippines in the Financial Action Task Force, the intergovernmental body combating money laundering and terrorist financing.

Established in 1989, the FATF has 37 members as well as associates and observers. In 2012, the Philippines avoided being placed on an FATF blacklist after making the amendments to its 2001 Anti-Money Laundering Act.

"Unfortunately, the casinos were excluded at the last minute," Herbosa said in early March. She added the FATF is now demanding to know the "status of the planned coverage of casinos" under the act.

FATF blacklisting, a threat which has become real again, would raise the cost of financial transactions and damage the Philippine economy, which is heavily reliant on remittances from its workers abroad.

For AMLC Executive Director Julia Bacay-Abad, the inclusion of casinos and real estate brokers, as well as the repeal of a half-century-old bank secrecy law which held up investigations into the scandal, are key amendments that congress should pass.

These reforms, however, are unlikely to pass smoothly as the Philippines' largest lenders are part of family-owned conglomerates that have a great deal of influence over political decisions.

BDO Unibank, the largest lender by assets, is controlled by the family of Henry Sy, Philippines' richest man, who owns conglomerate SM Investments and shopping center giant SM Prime Holdings. Metropolitan Bank & Trust is a unit of GT Capital Holdings, the holding company of tycoon George Ty, while Bank of the Philippine Islands is owned by Ayala Corp., a big conglomerate. Another major lender, Philippine National Bank, is owned by LT Group, the holding company of tycoon Lucio Tan.

"I'm sure it's going to be an uphill battle to lift the bank secrecy law," Abad said.

Osmena, also the chairman of the Senate's committee on banks, financial institutions and currencies, said "trying to amend that bank secrecy law is going to be bloody."

Authorities have already moved to boost existing regulation, pending legislative amendments, while the scandal is touching many nerves in the country. Analysts have avoided commenting on the issue, and a broadcaster has been reportedly suspended for making comments about RCBC.

"In fact, the wake-up call on money laundering risks may be positive in the long-run if it results in fast tracking of overdue legislative reforms to strengthen the legal framework for combatting money laundering and terrorist financing in the Philippines," Espenilla told the Nikkei Asian Review.

"The wake-up call on cybercrime risks is also a good reminder for enhanced vigilance that will make the system less vulnerable," he added.

On March 23, RCBC published a full-page newspaper advertisement which read: "RCBC offers its sincerest apologies for the involvement of its personnel in the money laundering scheme now [the] subject of Senate Blue Ribbon and AMLC investigations."

The Philippines seems to be learning some lessons -- the hard way. 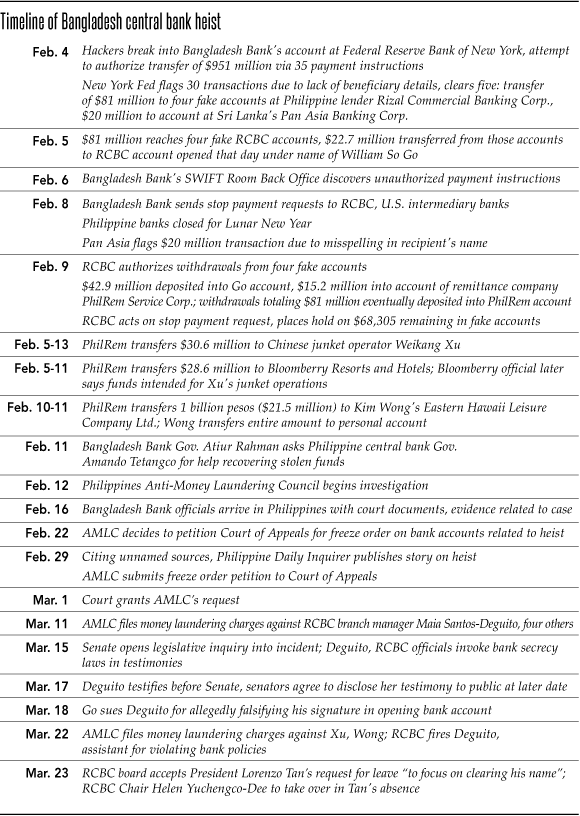