CHERNOBYL The disaster at the Chernobyl plant haunts not only Ukraine but also neighboring Belarus, which bore the brunt of the fallout. Over 1 million Belarusians still live on contaminated land. In the southeastern Gomel region, where the damage was greatest, regular thyroid checkups are a fact of life.

In the regional capital of Gomel, Svetlana Zaitseva was relieved to get the results of a recent ultrasound. "Your thyroid has some swelling, but it's stable," a doctor at the Republican Research Center for Radiation Medicine and Human Ecology informed her.

At the time of the disaster, Zaitseva was a university student. She was walking in a park when she heard the blast. She is unsure how much radiation exposure she received, but ever since she developed swelling in her neck, she has been going in for thyroid tests. Now 48, she said, "I never stop worrying." 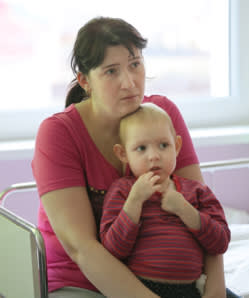 A mother and her child with leukemia await the results of a medical exam at the Center for Pediatric Oncology Hematology and Immunology in Minsk. (Photo by Masayuki Kozono)

Four to five years after the catastrophe, Belarus saw a surge in thyroid cancer among children. Last year, Belarus counted 358 cancer patients aged 17 or under. Thirty-two, or 9%, had cancer of the thyroid.

"That figure is clearly bigger than in other countries," said Natalia Konoplya, deputy director of the Center for Pediatric Oncology, Hematology and Immunology in Minsk. The heightened risk is reportedly due to the accumulation of radioactive iodine, ingested through contaminated milk and other means. The ultimate effects of low doses of radioactive cesium, which has a half-life of 30 years, remain unclear.

Half a world away, Japan is on guard for health-related consequences from the Fukushima Dai-Ichi meltdowns, which were triggered by the March 2011 earthquake and tsunami. Five years on, Fukushima Prefecture has conducted thyroid tests on about 380,000 people who were under 18 at the time. As of the end of last year, 166, or 0.04%, had been either diagnosed with thyroid cancer or were showing potential signs of the disease.

A prefectural committee monitoring the examinations said the figures do not appear to be "related to the influence of radiation."

"It's hard to predict the future of Fukushima," Konoplya said. "But careful observation is important, as not all is known about the effects of radiation on human health."