TOKYO -- Raising $35 million in 30 seconds with minimal disclosure sounds like something that could only be a racket.

But startups across the world have been turning to initial coin offerings, a sort of initial public offering involving the use of a cryptocurrency, to put together those kinds of sums that quickly and it is perfectly legal -- in theory at least.

The practice, however, has created a serious headache for financial regulators.

A total of $1.78 billion has been raised through ICOs since 2014. In the April-July period of 2017, more funds came through ICOs than from venture capitalists. ICOs offer a fast, low-cost quick fundraising mechanism and their rapid growth has been spurred by speculative investment. But concrete rules protecting investors have yet to be established and several companies that have used them are engaged in some thoroughly questionable operations.

Unlike stocks and corporate bonds, tokens sold for ICOs do not need to be accompanied by dividend and interest payments. In the absence of the kind of regulations that govern the issue of securities, the disclosure of information for an ICO can be completed quickly and easily.

Companies planning ICOs can solicit investors by simply posting a "white paper" or business plan online. Auditing and the disclosure of financial statements are not necessary.

That comes in stark contrast to an initial public offering, which can require one or two years' worth of preparation by securities houses and auditors.

With an ICO, a company can raise funds online directly from investors anywhere in the world, without relying on brokerages or banks.

Funds raised via ICOs in the April-July period totaled more than $1.11 billion, more than the amount of global investment by venture capitalists into businesses in the seed stage, according to Goldman Sachs. 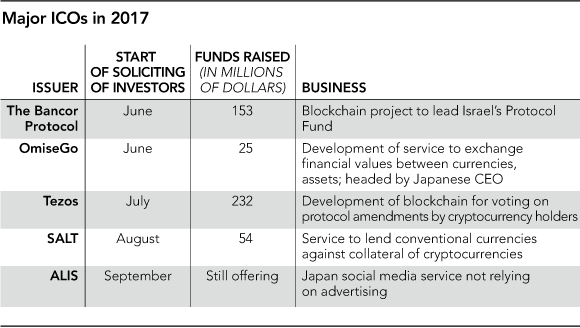 The popularity of ICOs has been buoyed by investors boosting profits on the rise in value of cryptocurrencies. The price of bitcoin has quadrupled since the start of this year and that of Ethereum is 40 times what it was.

With the emergence of people making a lot of money on bitcoin and its peers, "a cycle is being created in which unrealized profits on ICOs flow to other cryptocurrencies," said Kariya Mike Kayamori, CEO of Quoine, the operator of a leading digital currency exchange.

But some serious questions surrounding the ICO boom have come to light. Bitcoin technology analyst Koji Higashi analyzed 48 major ICOs, 56% of which have failed to offer pledged products of services. "Many ICO projects are overvalued," he said.

Companies with no substantive business can raise funds via an ICO if investors believe the value of their tokens will rise. Block.one, a developer of cryptocurrency technologies EOS based in the British Overseas Territory of the Cayman Islands, has raised $200 million, despite stating in its white paper that its token had no value.

"Although ICOs have contributed to the democratization of fundraising, phantom businesses can easily slip in as rules have yet to be fully developed," said Yukio Noguchi, adviser to the research institute of finance at Tokyo's Waseda University.

Even companies that have used ICOs have called for the problem to be addressed. The Omise group, for example, has said there should at least be rules such as a cap on fundraising.

Financial regulators in various countries are starting to look more closely at ICOs. The U.S. and Singapore have said they will work out rules to draw a clear line between securities and cryptocurrencies.

On Sept. 4, the People's Bank of China announced a total ban on the practice, saying that ICOs are full of "financial fraud" and "pyramid schemes." The statement echoes concerns in Beijing over the outflow of capital via digital currencies.

The Financial Services Agency of Japan put into force a revised payment services law in April, becoming the first country to legally define cryptocurrencies and introducing a registration system for their exchange. In August, the agency set up a cross-sectional team of some 30 officials to reinforce the oversight of ICOs and other practices related to cryptocurrencies.

But the FSA has yet to fully determine its stance. A senior official said ICOs fall "outside a net of regulations," but the agency cannot let transactions that ignore investors and circumvent the law go unchecked. At the same time, the FSA, like financial regulators the world over, is wary of pouring cold water over the rapidly developing technology.