In Japan, the lottery is out and investing is in He's not alone. Japanese are increasingly shunning lotteries and opting for a more rational path to wealth: investment. They see lucrative opportunities across Asia, not to mention far better odds of hitting the jackpot.

According to Nii, buying something that promises profit but will almost certainly lead to negative returns is proof you are a jojaku -- a loser in the information age. That goes for lottery tickets as well as other forms of gambling. He used to enjoy betting on things like horse racing, but not anymore.

"I would rather invest in myself and learn skills to make money and make myself rich," he said. 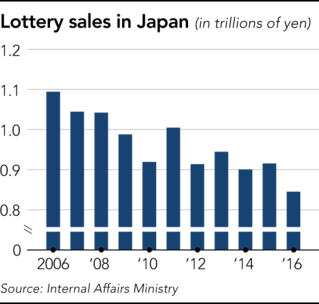 Meanwhile, the number of investors in Japan rose by 2.7 million in the five years through 2016, to 23.5 million. The increase came despite the fact that individual investors, the vast majority of whom are 60 or older, were net stock sellers over the same period.

Much is at stake. Tokyo aspires to be a top global financial hub, and reviving the capital markets is seen as an essential first step.

"Japan at the moment just doesn't have the culture for it," said Nicholas Smith, Japan strategist at Hong Kong-based brokerage CLSA. "If you look at Japanese pension funds, they are overwhelmingly in bonds, in the market where 60% of the government bonds have negative yields. The idea of changing that way of thinking, to suddenly be able to announce plans for Tokyo to be a major financial center, seems kind of laughable to me."

The majority of households' 1,809 trillion yen in assets sit idle in cash and deposits, according to the Bank of Japan. Risky assets, including investment trusts and mutual funds, account for just 17%, compared with 52.4% in the U.S.

Boston research company Cerulli Associates says Japanese investors are on the conservative side, with only 6.3% having risk profiles that fall into the active/aggressive segment. That is well shy of the 8.3% ratio for Chinese and 12.7% for Indians.

The Japanese preference for a conservative approach stems from "living in an economy that has been in the doldrums for decades," Cerulli said. Younger generations, though, are increasingly inclined to take the plunge.

SBI Securities, the country's largest online broker and a SoftBank affiliate, says its client base expanded 62% in five years to reach 3.92 million as of June. This makes it the country's No. 2 brokerage, and newcomers to the market have a lot to do with its growth: SBI says 80% of its new clients had no prior experience in stocks and are mainly in their 30s and 40s, or younger.

In the past year, SBI has teamed up with Money Design and Wealthnavi -- two pioneers of robo-advisory services in Japan. The results have been encouraging, according to the brokerage.

At Money Design, 51% of customers are in their 20s and 30s, with 47% reporting little or no investing experience.

So why are young Japanese gravitating to the markets now?

"Our government seems up to its neck financially," Nii said. "I don't think I can count on them for my retirement."

By contrast, Nii added, Asian countries like Indonesia and India look promising, with their young and growing populations. "Countries with younger populations will be more dynamic, because young people spend and innovate more," he said.

Services like Money Design are tapping into such sentiments.

"Japan is getting relatively poorer because its growth has stayed behind the rest of the world's," said Jin Nakamura, Money Design's chief executive. "We design portfolios without any home bias. They yield returns so long as the world economy grows, irrespective of how Japan's economy performs." Still, despite the growing interest among millennials, the fact remains: Japan is aging, and older people are more focused on avoiding losses than racking up gains.

A 2015 survey by the Japan Securities Dealers Association found that 56% of individual investors belonged to the 60-plus set. Investors in their 20s and 30s accounted for only 8%.

Compounding the issue, many veteran investors have become conditioned to taking profits on even the smallest market rally -- a natural tendency, perhaps, after years of plodding through slumps.

There are, at least, some signs of a change in attitude.

Even so, industry insiders are bracing for a hard slog. "We do not think we, alone, can bring about change," Money Design's Nakamura said.

Changing Japan's investment culture, he said, will require the involvement of banks, brokers and the government. And they will need to use all the tools at their disposal -- from the NISA program to individual pension plans.