In Singapore, loose clothes may point to a slack economy Women browse for clothes in Singapore. Changes in fashion may point to fluctuations in the economy, a theory that stretches back to the 1920s and American economist George Taylor.
KOTARO HIDAKA, NQN Singapore bureau chiefApril 29, 2015 13:00 JST | Japan
CopyCopied

SINGAPORE -- Economists and market analysts are always looking for indicators of which way the economy may be heading. One long-observed correlation is that between fashions and the business cycle. Singapore provides another laboratory where this phenomenon can be seen.

"One length long haircuts" and body-hugging clothes were all the rage with Japanese women during the economic boom of the 1980s. Those fashion trends have an echo in Singapore today. Visit any shopping district or train station, and you will come across young and not-so-young Singaporean women in snug garments. They may seem like the latest thing to a generation of workers who entered the job market in the 1990s, people with no firsthand knowledge of Japan's economic boom of the period, but we have been here before.

Now clothes seem to be loosening up, along with the economy. Unfortunately, the data is anecdotal: There are no statistics on shipments of formfitting dresses. However, according to a shop clerk named Shu Shu who works at Far East Plaza, a shopping mall in the city center, tight clothing has not been selling that well lately because it is hot. Given Singapore's tropical climate, it seems logical that women might prefer comfortable, breathable dresses to those designed to show off one's curves. Dancers at Juliana's Tokyo, an iconic bubble-era disco in Japan, turned heads with body-hugging clothes after the late 1980s.

There are a number of studies showing a strong correlation between the economy, stock prices and the length of women's dresses. One of the most famous was conducted by U.S. economist George Taylor in the 1920s. He found that when the economy is improving, women's skirts get shorter. Some have expressed skepticism about this relationship, but that did not stop the creation of the Hemline Index, which tracks the variables.

Assuming the informal survey of the shopping mall is correct, is the drop in the number of women wearing tight dresses related in any way to economic conditions in Singapore? The city-state has enjoyed solid economic performance for many years, with nominal gross domestic product per capita jumping about a hundredfold in the 50 years since independence. But Singapore has faced headwinds in recent years. 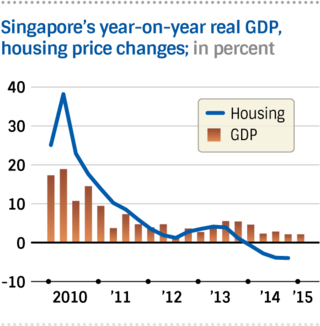 Singapore's GDP rose by around 2% in 2014, adjusted for inflation, about half as fast as the previous year. The number of private homes sold in December 2014 was the lowest since January 2009, when sales were hit hard by the global financial crisis. Real estate prices, which had been climbing previously, fell for the fourth straight quarter in the three months through December 2014. According to Takayuki Miyajima, an economist at the Mizuho Research Institute, "The Singaporean economy has been sluggish, with output by manufacturers declining."

The slowdown may have something to do with the government's conservative policy. Given that, generally speaking, the higher the economic peak the lower the trough, the government has been trying to smooth out the fluctuations and aiming for sustained growth. Concerned about the rise in household debt and property prices, the government put caps on mortgages and car loans in June 2013. It also raised stamp duties -- taxes on documents needed to buy or lease of property -- and raised the minimum down payment for the purchase of a second house. In April 2015, it announced a plan to phase in a borrowing limit on unsecured loans for individuals.

Singapore's monetary authority noted the increase in household and corporate debt in a 2014 report. And on April 14, it held interest rates steady, surprising the markets. Still, shares in Singapore hit an over seven-year high the following day. Amid a global stock market rally, investors in Singapore interpreted the decision by the monetary authority as signaling that the economy was strong enough not to require a boost.

Back at the Far East Plaza shopping mall, Shu Shu said tight dresses are becoming less popular, but miniskirts and dresses with short hemlines are still selling well. If George Taylor's theory holds, that would appear to indicate the Singaporean economy is still going strong. Look for the government to stay the course.