In much of Asian industry, the state still reigns supreme

HONG KONG Douglas Morton, head of Asia research at Northern Trust Capital Markets, has confidently put Shenzhen-based internet company Tencent Holdings on his buy list. Not only that, he believes it will surpass all others in terms of market capitalization. "Tencent could become the largest company in the world," Morton says.

Tencent's founder, Pony Ma Huateng, is one of the 20 "value creators" identified by the Nikkei Asian Review. Morton believes the company's ability to "compound cash" in the current environment is "one of the strongest."

However, it is a bit misleading to say that entrepreneurial companies like Tencent are taking center stage in Asia. State-owned enterprises, especially from mainland China, remain predominant.

Among the 12 Asian companies exceeding $100 billion in market cap as of Sept. 23, eight are Chinese and six are SOEs. The sheer size of the Chinese market, coupled with restrictions on foreign competitors, has allowed them to accumulate hefty profits and use that money to venture abroad with government backing.

This applies, more or less, to Tencent and Alibaba Group Holding, another private Chinese company that tops the Asian market cap list. But the Chinese economy is still dominated by SOEs, notwithstanding calls for structural reform.

For global investors, Chinese SOEs cannot be ignored due to their size and stability. China Mobile, which was recently overtaken by Tencent in terms of market cap, is the largest mobile carrier in the world, with over 840 million subscribers, mostly in China. Its half-year net profit was 60.5 billion yuan ($9.07 billion), more than three times larger than Tencent's. "Despite China Mobile having the least upside potential to our target price, it remains our top pick for its large index weighting, low earnings volatility and [fourth generation] dominance," said Ramakrishna Maruvada, an analyst at Daiwa Capital Markets.

The banking sector offers evidence of the pull of state-owned Chinese companies, as the top four banks are among the $100 billion club in Asia. Although growth is slowing, and worries about asset quality are rising amid economic slowdown, the aggregate net profit of the four banks amounted to 481 billion yuan in January to June. The net profit of the smallest, Bank of China (BOC)'s 93 billion yuan ($13.9 billion), dwarfs its Asian peers, such as Indonesia's Bank Central Asia's 9.57 trillion rupiah ($732 million). 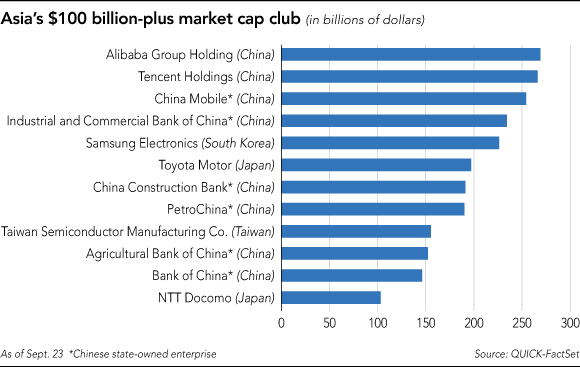 The three oil conglomerates are another example of state primacy in China. The plunge in oil prices has dragged down their combined net profit by around 80% in the first half of the year, but total assets of leader PetroChina at the end of June stood at 2.41 trillion yuan, which exceeds both BP and Chevron, and its net operating cash flow of 111.8 billion yuan for the first six months was higher than any of the four global oil majors.

THE CHINESE WAY The heads of these Chinese SOEs did not meet our criteria as value creators because their selection, which is controlled by the Communist Party, is not necessarily based on principles of corporate value maximization.

As odd as it sounds outside China, it is not uncommon to see high-ranking personnel, including chairmen, shifted among rivals in the same sector. In banking, for instance, Tian Guoli, chairman of BOC since May 2013, had previously been chairman of Citic Bank, the banking arm of the state-owned conglomerate Citic.

Agricultural Bank of China (ABC)'s Zhou Mubing climbed the ladder mainly in the government sector, rising to become chairman of the bank in June after being the vice chairman of the banking regulator. Starting in 2000, he worked in local government in Chongqing, finally serving as vice mayor under Bo Xilai, a former political bigwig now serving a life sentence for corruption.

These moves are determined by the party without explanation, and terms in top posts tend to be brief.

"The basic concept around the world -- that the board appoints the chairman and CEO, oversees the management, makes major strategic decisions, or works closely with the management -- that doesn't hold in SOEs in China," said Jamie Allen, secretary-general of the Asian Corporate Governance Association. "It reflects a very different system of corporate governance in China," one in which management of companies in the state-owned sector is directly influenced by politics.