India and ASEAN set to return to growth in early 2021: JCER The outlooks for Asian economies have further deteriorated in the last three months as the coronavirus pandemic has continued increasing.

Economists of five Southeast Asian countries and India have again revised downward their projections for 2020 or fiscal 2020/21, which had already fallen into the negative in the June survey. Restrictions on activities have weakened domestic demand, and the unclear future of the pandemic has deteriorated business sentiment. Recoveries are expected after 2021, but they depend largely on the control of COVID-19, a survey found.

The Japan Center for Economic Research and Nikkei conducted a quarterly consensus survey from Sept. 4 to 24, collecting a total of 40 responses from economists and analysts in the five biggest ASEAN members -- Indonesia, Malaysia, the Philippines, Singapore and Thailand -- and in India.

The ASEAN5 economies contracted sharply, by 10.7%, and India by 23.9% in the April-June period as the number of COVID-19 cases surged. The economic slump continued in the July-September period.

The growth projection for ASEAN5 for 2020 was -5%, down by 1.7 points from the previous survey in June. The 2020 forecasts for all five countries were revised down and remained negative. The quarterly growth projections for the July-September and October-December periods are negative for all five economies. "We assume that private consumption growth drastically slowed due to weakening consumers' purchasing power [following] massive layoffs in the real sectors," commented Juniman of Maybank Indonesia. Emilio Neri Jr. of Bank of the Philippine Islands predicted that "record-[high] unemployment combined with health concerns and strict rules on public transport" would result in "an 8% to 10% contraction" of real gross domestic product in 2020. Somprawin Manprasert of Bank of Ayudhya in Thailand expected "COVID-19 and lockdowns to trigger deep economic recession" and said that the decline in GDP could be worse than the figure of -7.6% recorded in the 1998 Asian Financial Crisis.

Economists expect recovery after Q4 2020 or in 2021. Manu Bhaskaran of Centennial Asia in Singapore stated that "we envisage a sharper pick-up in 4Q20 as most restrictions are lifted and manufacturing accelerates." Amonthep Chawla of CIMB Thai Bank said that "we expect Thailand's economy to partially recover by the second quarter of 2021" supported by "government spending [as well as] rebounding purchasing power and confidence among middle class households."

Most economists agree that public spending is one of the keys to economic recovery. "Fiscal policy stimulus will be the key growth catalyst in 2021," remarked Carlo Asuncion of Union Bank of the Philippines. Lalita Thienprasiddhi of Kasikorn Research Center in Thailand judged that "government spending will be the only growth driver of the Thai economy" for the moment.

Still, the future recovery depends largely on control of COVID-19. "The increase of daily positive COVID-19 cases is the biggest risk for Indonesia's economy in the coming months," stated Dendi Ramdani of Bank Mandiri in Indonesia. "A full recovery will only happen once a vaccine is discovered," added Neri of Bank of the Philippine Islands. The 23.9% decrease for the Indian economy was far deeper than ASEAN's in the April-June period. It was largely due to the nationwide lockdown. The government thereafter cycled through loosening and tightening restrictions, aiming to achieve both infection prevention and economic reopening, but the number of cases continued to increase. Confirmed cases reached 6 million, the second largest figure in the world after the U.S., at the end of September.

The average growth projection for fiscal 2020/21 was -8.4%, down by 3.3 points from the previous survey in June. Economists foresee that negative quarterly growth could continue until the January-March period in 2021.

Dharmakirti Joshi of CRISIL revised his 2020/21 projection from -5% to -9%. "With the pandemic's peak not yet in sight and the government not providing adequate direct fiscal support, the downside risks to our earlier forecast have materialized," he explained. The economy partially reopened after June, but "the durability of the recovery remains in question, as rising cases may lead to the re-imposition of localized lockdowns or create more risk-averse consumers," stated Sonal Varma of Nomura.

Tirthankar Patnaik of National Stock Exchange of India said: "An unrelenting rise in COVID-19 cases with emerging signs of a second wave in a few regions/districts is likely to keep discretionary consumption demand muted for a prolonged period."

The survey asked economists about policies and measures to be taken to achieve two targets -- infection prevention and economic recovery. Most answers were categorized into three groups: improvement of methods to contain COVID-19, such as enhanced testing and more tactical guidelines for social distancing; increased public spending and efficient use of it in fields such as income support, subsidies for small and medium-sized businesses, and public investment; better management in the central and local governments, including improved communications between public bodies. 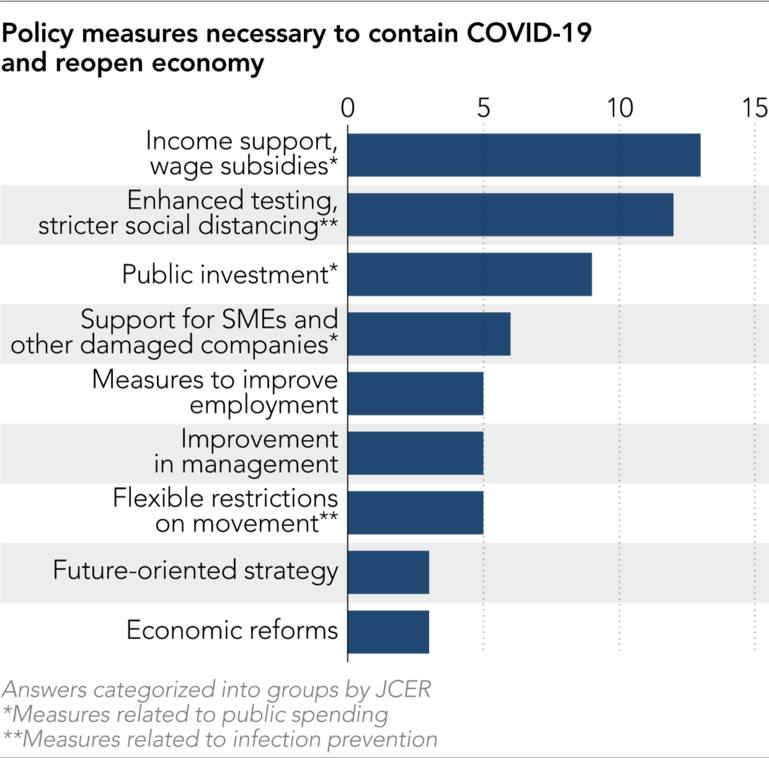 Many economists commented on public spending. "The government should not be wary of increasing spending and widening the fiscal deficit temporarily to support the economy, even if it comes at the cost of a sovereign rating downgrade," said Vincent Loo Yeong Hong of KAF Research in Malaysia. Shekhar Shah of National Council of Applied Economic Research in India stated that "to stimulate the economy, the government should identify key sectors which contribute the most to GDP and create the most employment and find ways to support them."

Wan Suhaimie of Kenanga Investment Bank in Malaysia focused on the poor, saying: "In the near term, a more comprehensive recovery plan that focuses on providing continuous social assistance to the B40 (bottom 40%) and more support to the tourism industry is needed." Bank of Ayudhya's Somprawin predicted that about 30% of all companies in Thailand "would experience tight liquidity in 2021" and stressed the necessity of providing "targeted direct loans to troubled firms and easing credit conditions." Randolph Tan of Singapore University of Social Sciences worried about further deterioration of employment conditions and said it would be necessary to "support workers in acquiring skills to operate safely and contribute effectively under the conditions of the pandemic."

On government management, Jonathan Ravelas of BDO Unibank in the Philippines emphasized the necessity of "improved coordination" between central governments and "various local government units." Alvin Ang of Ateneo de Manila University expected public sectors to "address data collection efficiency and accuracy for policy response." In India, NSE's Patnaik emphasized the importance of allowing "greater fiscal freedom to states, [as] the measures to limit the spread of the coronavirus would increasingly be driven at the state level."