NEW DELHI -- India cut the retail prices of petrol and diesel by 2.50 rupees per liter ($0.03) on Thursday, to partly offset rising global crude prices and a weakening currency.

The price reduction was implemented with immediate effect. The government would absorb the 1.50 rupee per liter excise duty while oil marketing companies would bear the brunt of the reduction of another rupee per liter, Finance Minister Arun Jaitley said at a news conference.

He also asked state governments to match the central government's efforts and reduce the value-added tax they impose on petrol and diesel. Moving swiftly, Prime Minister Narendra Modi's Bharatiya Janata Party-ruled states such as western Maharashtra and Gujarat lowered their VAT on fuel prices by 2.50 rupees, bringing the total rate cut to 5 rupees per liter in their regions.

"I'm writing to the states that they should absorb the equivalent amount of [2.50 rupees of] the VAT," Jaitley said. Overall, the government expects to spend 105 billion rupees on these subsidies in the year to end-March, the minister added.

Taxes on petrol and diesel account for over a third of retail fuel prices and are one of the major sources of revenue for the government.

But consumers have been complaining about increasing fuel prices -- petrol in the capital cost 84 rupees per liter on Thursday and diesel 75.45 rupees -- and calling on the government to help shoulder some of the costs. 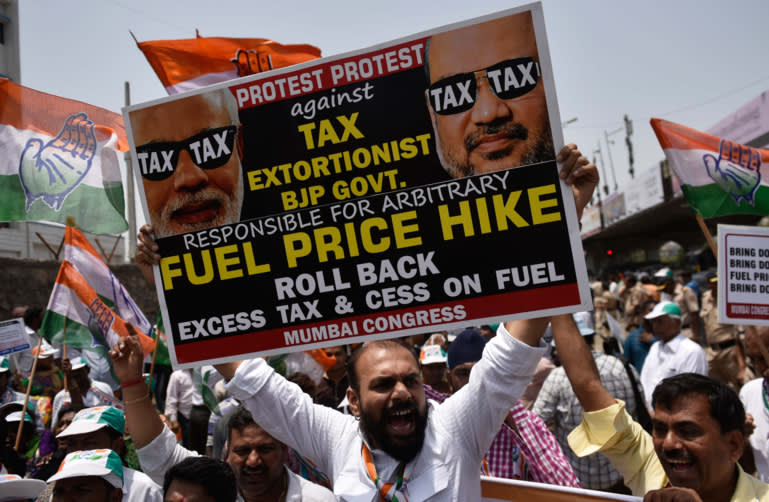 Mumbai Congress protest against rising prices of petrol and diesel in May.(Getty Images)

Such complaints come at a critical time for the government, given that elections are due in three states of Madhya Pradesh, Rajasthan and Chhattisgarh by this year-end, and nationwide polls -- in which Modi will seek a second five-year term -- are scheduled to be conducted by May 2019.

Brent crude oil prices touched a four-year high of $86 a barrel on Wednesday and interest rates in the U.S. have gone up to 3.2% recently. Owing in part to these external factors, the rupee has fallen about 15% against the U.S. dollar since January. The Indian currency hit a record low this week, breaching 73 to the dollar.

The fuel price cut will also help the government to keep inflation at a moderate level of below 4%. The Reserve Bank of India, the country’s central bank, is widely expected to hike the benchmark repo rate by 25 basis points on Friday to contain any inflationary pressure from the surging crude prices and a sliding rupee.