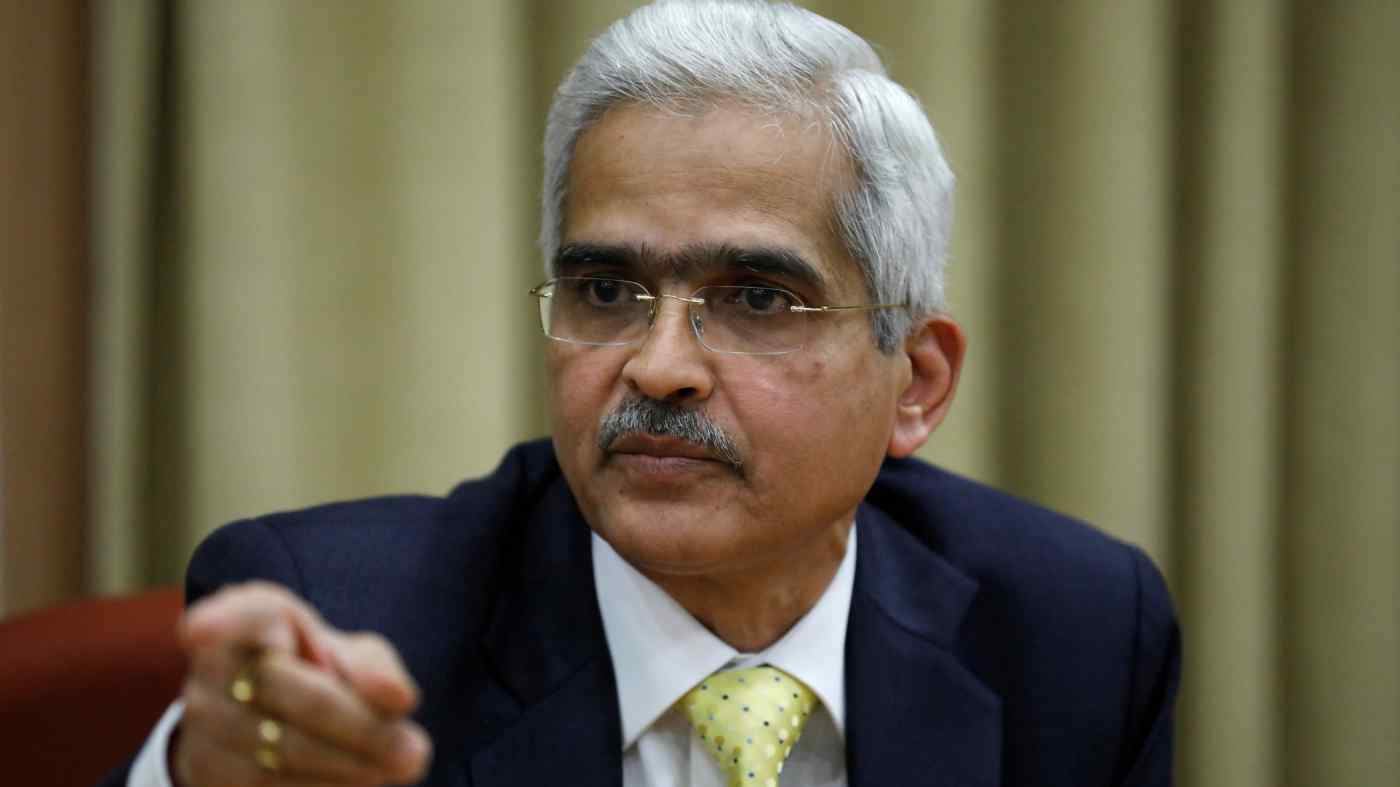 Shaktikanta Das, governor of the Reserve Bank of India, announced a surprise rate cut of four-tenths of a percentage point in hopes of easing the economic pain of the coronavirus.   © Reuters
KIRAN SHARMA, Nikkei staff writerMay 22, 2020 14:27 JSTUpdated on May 22, 2020 17:58 JST | India
CopyCopied

NEW DELHI -- The Reserve Bank of India on Friday cut its benchmark interest rate 40 basis points to 4%, in a surprise move, as the novel coronavirus pandemic jolts the country's economy.

The central bank moved up its monetary policy committee meeting, which was scheduled for early June, to make the rate cut. The committee agreed on the size of the cut by a vote of 5 to 1. It also trimmed the reverse repo rate 40 basis points to 3.35%.

"The MPC voted unanimously for a reduction in the policy repo rate, and for maintaining the accommodative stance of monetary policy as long as necessary to revive growth [and] mitigate the impact of COVID-19, while ensuring that inflation remains within the target," RBI Gov. Shaktikanta Das said in a televised statement.

In late March the central bank cut the policy interest rate 75 basis points to 4.40%, bringing it to its lowest point in a decade. On April 17, it lowered the reverse repo rate 25 basis points to 3.75%.

The latest rate cut comes on the same day that India recorded its highest single-day rise in COVID-19 cases so far, with 6,088 new infections. That brings the total number of cases to 118,447, including 3,583 deaths, up 148 over the previous 24 hours. It also follows Prime Minister Narendra Modi's May 12 announcement of a stimulus package worth 20 trillion Indian rupees ($265 billion), equivalent to 10% of the country's gross domestic product, in an effort to revive the economy. Das said the Indian economy had been impacted severely by the two-month nationwide lockdown meant to curb the spread of the virus. The country's top six industrial states, accounting for about 60% of industrial output, are largely in red or orange zones, he said.

The lockdown, imposed March 25 and scheduled to run through May 31, is color coded -- red, green and orange -- based on contagion risk. Red districts have clusters of positive cases, green areas have zero reported infections, while an orange areas have smaller numbers of cases. Red zones have heavier lockdown restrictions.

"High-frequency indicators point to a collapse in demand. beginning in March 2020, across both urban and rural segments," Das said. Consumption of electricity and oil -- indicators of day-to-day demand -- have plunged, he added.

Das said the combined impact of demand compression and supply disruption will depress economic activity in the first half of the April 2020 to March 2021 financial year. "Given all these uncertainties, [economic] growth in 2020 to 2021 is estimated to remain in negative territory, with some pickup in growth impulses from [the second half of fiscal] 2020-21 onward."

Headline inflation, he said, "may remain firm in the first half" of this financial year, but should ease in the second half, falling below 4%.

Analysts say the central bank appears deeply concerned about India's growth prospects. Its statement that growth "is going to be negative for at least two quarters [this fiscal year] means, officially, we are getting into a recessionary phase," N.R. Bhanumurthy, a professor at the National Institute of Public Finance and Policy, told the Nikkei Asian Review.

"At the same time, they seem to be comfortable on the inflation front. That's why they are going for the rate cut, [while my] guess [is] inflation might be getting into an uncomfortable territory, maybe at the end of the second quarter or so," he said, adding that he is happy the bank is taking steps to address short-term concerns, which the government appears reluctant to handle with fiscal policy.

Capital Economics, a research specialist, said in a note that the rate cut announcement "is an important development, as there has been an unprecedented inflow of cash into the reverse repo window over the past two months as banks have turned increasingly risk-averse."

Pointing to the other regulatory measures taken by the Indian central bank, it said the most important development is that the three-month debt moratorium announced in March has been extended until August. "That should help to prevent an immediate deterioration in bank balance sheets," it said.