NEW DELHI -- Aiming to revive an economy battered by the coronavirus pandemic, India on Monday unveiled a budget that included proposals to more than double its health care outlay to over 2.2 trillion rupees ($30 billion) and raise the ceiling on foreign direct investment in the insurance sector.

"Our fight against COVID-19 continues into 2021," said Finance Minister Nirmala Sitharaman. She highlighted six key pillars of the country's budget for the financial year starting in April -- health and well-being; physical and financial capital, and infrastructure; inclusive development; reinvigorating human capital; innovation and research and development; and minimum government and maximum governance.

India has so far reported over 10.7 million people had contracted COVID-19 in the country, the second highest number in the world after the U.S. Around 154,000 have died in India because of the disease.

Presenting the country's first post-pandemic and paperless budget in parliament, Sitharaman said a new health care scheme sponsored by the federal government will be launched with an outlay of about 642 billion rupees ($8.8 billion) over the next six years. This will be used to expand capacities in primary, secondary, and tertiary health care systems, strengthen existing national institutions, and create fresh ones that can detect and treat new and emerging diseases.

"I have provided 350 billion rupees for COVID-19 vaccine" for the next fiscal year, she said, and committed to further funds if required. The budget outlay for health and well-being, she pointed out, was about 2.24 trillion rupees compared with the current financial year's 944.5 billion rupees. 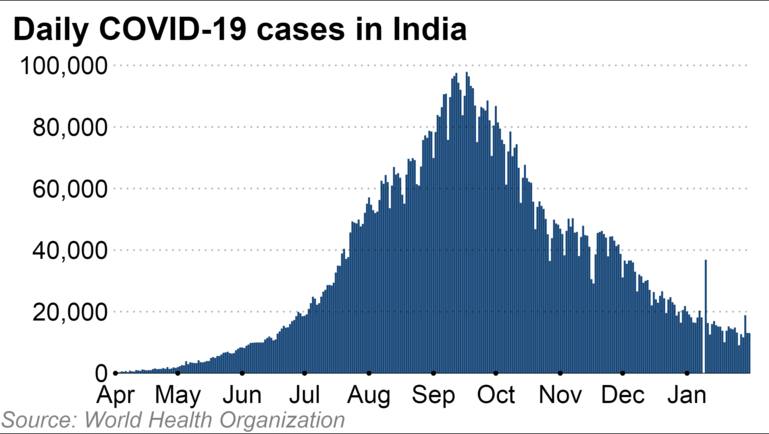 India's health care expenditure of a little over 1% of gross domestic product is one of the lowest in the world. The country started a COVID inoculation drive on Jan. 16 after having approved two locally manufactured vaccines for emergency use. It has since inoculated more than 3.75 million people.

The vaccine campaign is crucial to India's economic recovery. The government has projected a contraction of 7.7% in the financial year ending in March owing to the fallout of the pandemic, but expects robust growth of 11% in the next fiscal year.

Among other things, Sitharaman also proposed to lift the foreign direct investment limit in insurance companies to 74% from 49%.

The government hopes the economic rebound will be backed by "a robust recovery in the services sector and prospects for robust growth in consumption and investment," it said in its annual economic survey ahead of the budget.

Sitharaman's budget proposals were also aimed at boosting the agriculture sector amid ongoing protests by farmers against recent reforms which they say give corporations an advantage over them. The government said the reforms liberalize the sector and empower farmers.

"To provide adequate credit to our farmers, I have enhanced the agricultural credit target to 16.5 trillion rupees in [the next fiscal year from 15 trillion rupees now]," she said. "We will focus on ensuring increased credit flows to animal husbandry, dairy, and fisheries."

Sitharaman also estimated that fiscal deficit for the next financial year will be around 6.8% of GDP. She expects it to rise to 9.5% in the current year in the wake of a slump in government revenues and a rise in market borrowings due to the pandemic. The government had earlier projected it to be 3.5% of GDP for the year until March 31.

The government had originally earmarked an expenditure of 30.42 trillion rupees for the current financial year. This was revised to 34.5 trillion rupees, as it ramped up spending to revive domestic demand affected by the pandemic and related lockdowns.

Moody's Investors Service said the deficit target of 6.8% shows that India is trying to strike a balance between supporting growth and reducing its deficit modestly, but improvements in tax compliance and monetization targets may be difficult to achieve.

"The government has limited room to reduce spending without further weakening growth, and nominal GDP growth will remain critical for future deficit reduction," it said in a report.