Government intervenes after string of defaults by infrastructure lender IL&FS 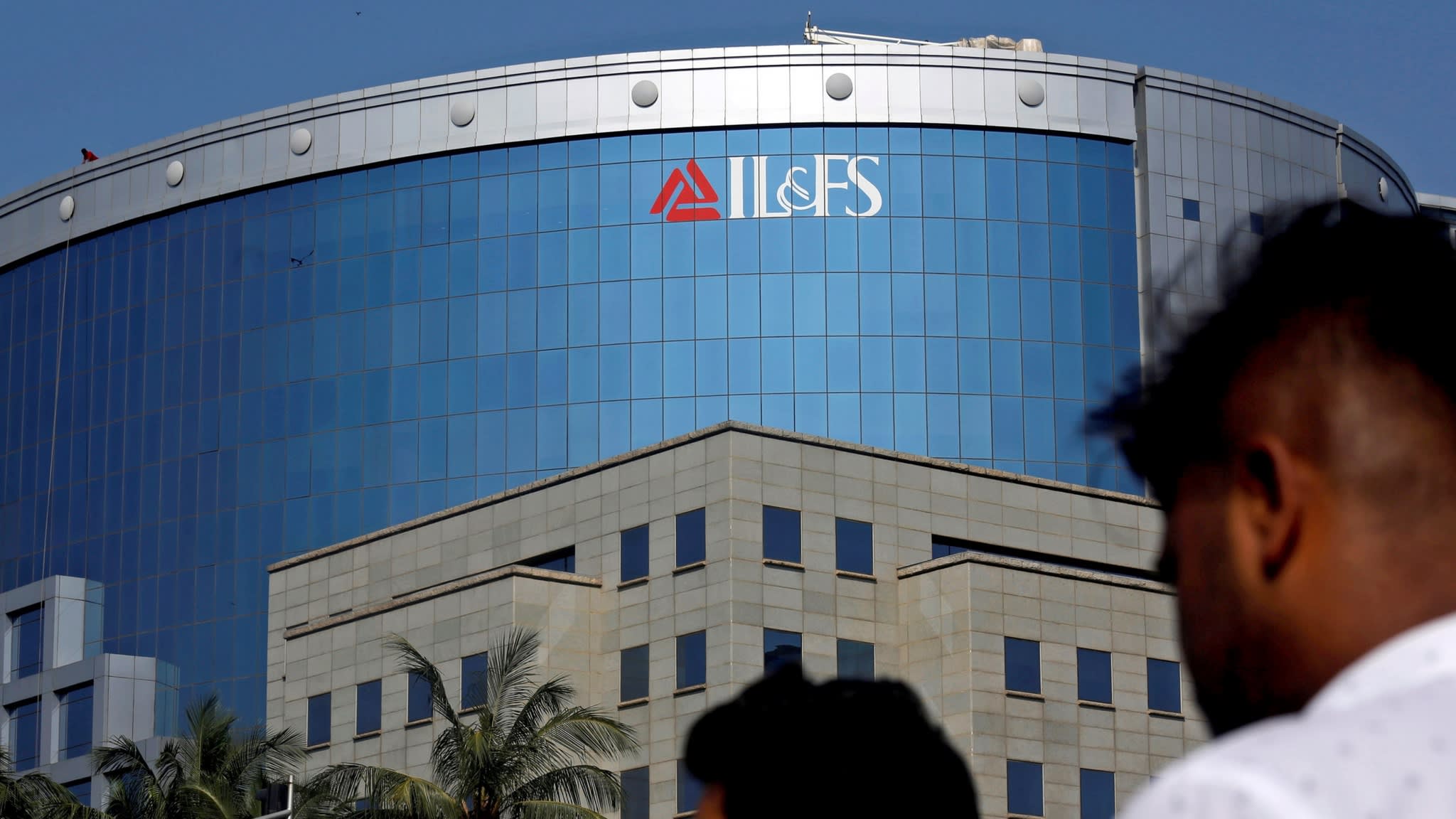 MUMBAI -- India's financial authorities are battling to avert a major credit crisis in the wake of a series of defaults by one of the country's biggest public infrastructure lenders.

However no big shareholder had committed publicly to participate in any part of the scheme, leaving the success of the funding program in question. Sources close to the Japanese nonbank lender Orix, which has a 23.54 % stake in IL&FS, told the Nikkei Asian Review that the company had not made any decision and was "just observing the situation."

The uncertainty prompted the government on Monday to petition the national bankruptcy court to invoke a companies law clause that allows it to order the dissolution of a board if its competence is in question and threatens to damage the public interest. The court immediately accepted the petition and allowed the government to nominate a new board.

The lack of clarity over IL&FS’s future is expected to keep the debt market strained and financial stocks, especially nonbanks, under pressure.

IL&FS defaults have triggered widespread alarm over the prospect of a wider credit crunch should the company with $12 billion in debt become insolvent, as many banks, insurance companies and mutual funds are exposed to its debt and other nonbanks' debts.

In addition, even if IL&FS manages to secure the funds to meet forthcoming payments, as well as already-defaulted debts, banks and other institutions will raise the bar for lending to nonbanks, say analysts.

On Friday India's Minister of Economic Affairs announced that the central government would cancel some bond issuance for the rest of the year to avoid a liquidity squeeze, while the insurance regulator told all insurers to declare all their debt and equity exposures to IL&FS and its various subsidiaries and special purpose vehicles.

The crisis has yet again highlighted the opaqueness of India's financial system, where not only state-owned banks but many nonbanks are struggling with serious governance issues which may have exacerbated the sector's problem of nonperforming loans.

It has also raised questions over the serious moral hazards built in to a system where the government is often the debtor, as well as owner and the regulator.

Until recently, the company had always enjoyed a near sovereign credit rating thanks to its mix of state and private shareholders and its key role in funding many of the public-private-partnership infrastructure projects which are crucial to India's economic growth.

The blue chip rating was maintained even after total debt ballooned to over $12 billion by the end March 2018, with interest payments topping $1 billion -- more than total operating profits.

The crisis was sparked in early September when a local news report revealed the nonbank group had defaulted on about $40 million worth of short-term debts. In response, on Sep. 8, ICRA, Moody's Investment Service group rating agency, sharply downgraded the company's short-term debts from the highest A1+ to A4, and long-term debts from AA+ to BB, a junk grade. Other rating agencies followed suit.

Over the next three weeks, IL&FS defaulted on other debts, while a second nonbank lender, Dewan Housing Finance, fell victim to growing fears over financial robustness in the non-bank lending market. A major mutual fund, DSP, sold a chunk of Dewan debt at big discounts, causing a panic sell-off of shares in all non-bank lenders, banks and other financial institutions.

For a few working days the country's credit market was, in effect, frozen.

"A couple of well-capitalized publicly-traded corporations have called me to offer higher-than-usual-yield commercial papers. I was surprised as they had never pitched CP sales to me before," a small-hedge-fund manager in Mumbai told the Nikkei Asian Review. The manager declined to buy them. It seemed there were no buyers of debt securities at that point.

That prompted a fightback from authorities, which is likely to continue until IL&FS is out of danger.

The Reserve Bank of India and the Securities and Exchange Board of India issued an extremely-rare joint statement on Sunday Sep. 23, saying they were "closely monitoring recent developments in financial markets and... ready to take appropriate actions, if necessary."

The government has repeatedly assured the market that it would "take all measures" to make sure "adequate liquidity is provided to nonbank financial companies, mutual funds and small and medium enterprises." Finance Minister Arun Jaitley even urged the RBI to take bolder measures to improve the liquidity situation.

In response the RBI announced on September 24 that it would buy $1.4 billion in Indian government bonds from the secondary market. The central bank also injected some $26 billion over the next two days into the financial system with a so-called repo operation, in which a central bank borrows government bonds for cash collateral.

RBI has also eased liquidity rules by allowing banks from this week to include a higher ratio of government securities in fulfilling minimum requirements. The measure freed up some cash deposits to be used for lending, which otherwise would have been reserved to meet liquidity requirements.

Indian commentators have slammed the complacency displayed by the government and the financial system toward the problems that have been building inside IL&FS and other nonbank lenders.

Worse, IL&FS's problems appear to have been exacerbated by the government itself.

IL&FS's board revealed this weekend in a statement that government agencies had overdue bills worth about $2.2 billion, implying that this has been a primary cause of the liquidity shortage.

In fact, one of IL&FS's first defaults was related to a delay in repayment by the National Highway Authority of India, a Road Ministry agency that has been a regular client of the group.

The problem of bad loans is not limited to nonbank lenders. Public sector banks account for roughly 70% of all bank lending in the country, and 15.6% of those loans are now recognized as nonperforming assets. This compares to just 4% at private-sector banks. 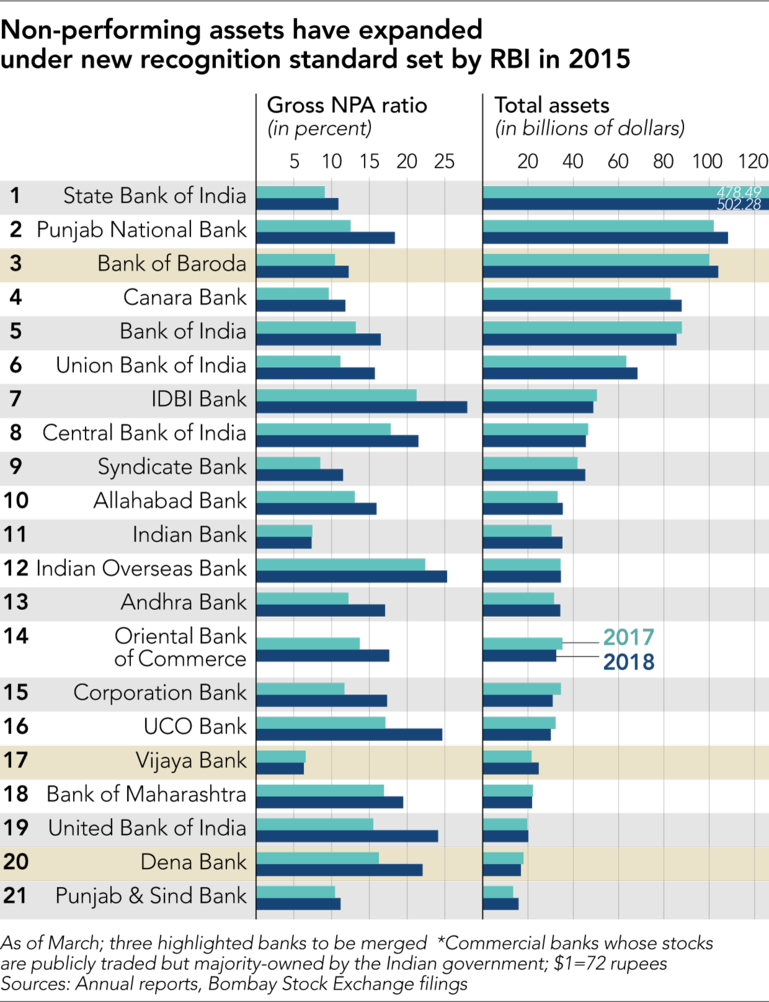 Today one of the biggest generators of nonperforming loans at state-owned banks is the power plant industry, some of which are state-owned and others are built on public-private partnership schemes. The entire sector has overdue loans of about $30 billion.

The prolonged NPA hangover in the public sector banks is regarded as a major cause of slow credit growth.

Unlike private-sector banks, which are regulated by the RBI only, public-sector banks are partly regulated by the finance ministry and partially by the central bank. Former RBI Governor Raghuram Rajan and current Governor Urjit Patel have both warned that weak asset quality control and frequent frauds are partly due to this regulatory structure tainted by conflicts of interest and political connections.

Lack of good governance at those banks tends to allow some executives to act against the interests of depositors and shareholders by skipping due diligence and allowing government agencies arbitrarily to delay repayments.

In a letter to an Indian parliament committee earlier in September, Raghuram Rajan warned that there was a dangerous incentive for all stakeholders, including the government, sustain the life of a nonperforming asset by adding new loans to sustain interest payments.

This practice allows the bank to avoid registering losses and the government to avoid restructuring the infrastructure project or infusing new capital into the bank.

"Without governance reform, recapitalization is not likely to be useful," Rajan warned, suggesting an urgent need to change the regulation governing state-owned banks.

The RBI this year began to move against some of the worst transgressions by forcing some private-sector-bank boards to replace their chief executives in the wake of accounting and other frauds or irregularities.

The government has also tried to address the problem of governance and nonperforming loans at state banks by encouraging consolidation. Even as the IL&FS crisis was spiraling, it announced the merger of three state-owned banks -- Bank of Baroda, India's third largest state bank, the small but healthier Vijaya Bank and the smaller but struggling Dena Bank. 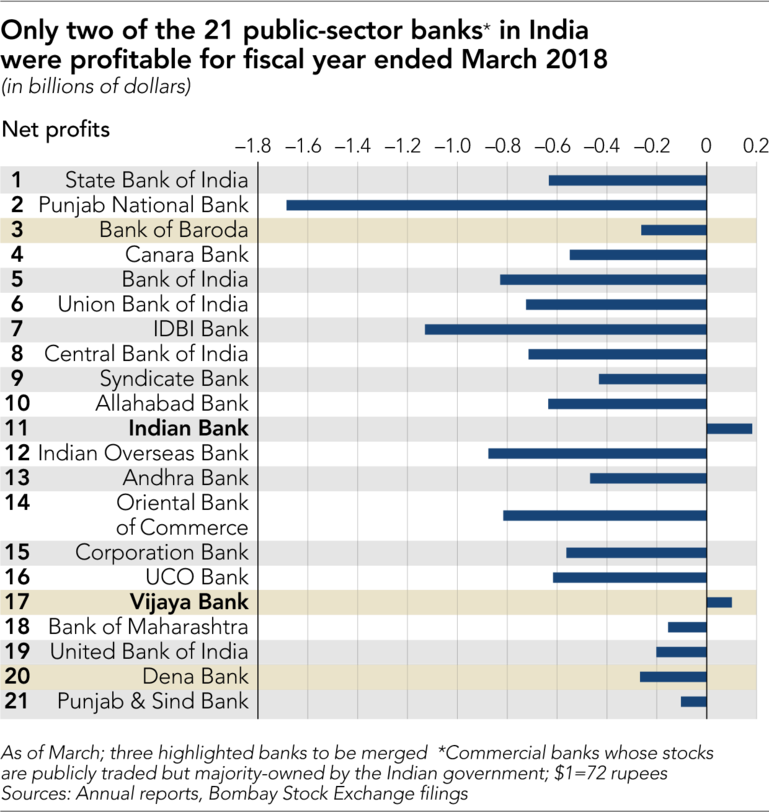 Kunal Shah, analyst at Edelweiss Securities, believes there is more to come. "Much-needed consolidation in the public-sector banking space has begun," he said in a research note after the announcement.

The government may also have to step up its financial support for the sector. It has injected more than $23 billion worth of equity capital into public sector banks over the last five years, and many analysts believe more will come in future. Governance reforms are likely to be demanded by the public in return.

India may well weather this credit crunch in the short-term. But in the longer-term the crisis at IL&FS will have to do more than reinvigorate debate about how to reform the financial system of the world's fastest growing major economy. It will have to deliver change.