MELBOURNE -- Australia, the world's largest exporter of coal and iron ore, is no stranger to big mining projects. Even so, the controversial Carmichael coal mine, which breaks ground this month, stands apart in terms of scale.

By the time it begins operations in 2020, the mine, located in remote central Queensland, will be the largest the country has ever seen, and one of the biggest in the world, stretching 45km in length.

At peak capacity, the site could produce up to 60 million tons of coal annually, an output 6-12 times greater than most existing Australian mines.

Adani Mining, the Indian business giant behind the US$16.5 billion development, estimates that it will extract 2.3 billion tons of coal over the mine's 60-year lifespan. Most of the fuel will be exported to India, requiring the construction of a 189-km rail line to connect the mine to Abbot Point, Australia's most northern coal port.

The state and federal governments have sold the project to the public as a huge economic windfall for a region beset by joblessness and economic stagnation. In Townsville, the region's largest urban center, unemployment last year rose above 13 percent, more than double the national average.

"There will be jobs right across the state, this project will deliver those jobs," Queensland Premier Annastacia Palaszczuk said in June, after Adani announced it had finalized its involvement in the project.

The Adani Group, an Indian conglomerate led by self-made billionaire Gautam Adani, claims the mine will create 10,000 jobs and generate US$17 billion in taxes and royalties for state coffers over its lifespan.

Queensland's Department of State Development has estimated that construction alone will generate $259 million in direct and indirect economic benefits annually, with production pumping another $350 million into the state economy.

The project, however, has been plagued by controversy almost from the moment it received preliminary approval from the authorities in Queensland, the country's third-most populous state, in 2014. Several court challenges, aimed at protecting vulnerable species and indigenous land rights, have unsuccessfully tried to derail the development.

There have also been nagging questions about the economic viability of the mine amid declining coal prices worldwide, despite the rosy predictions of politicians. Industry consultancy Wood Mackenzie last year estimated that Australia's coal exports, its second-biggest earner, would plunge from 210 million tons in 2016 to 135 million tons in 2035. 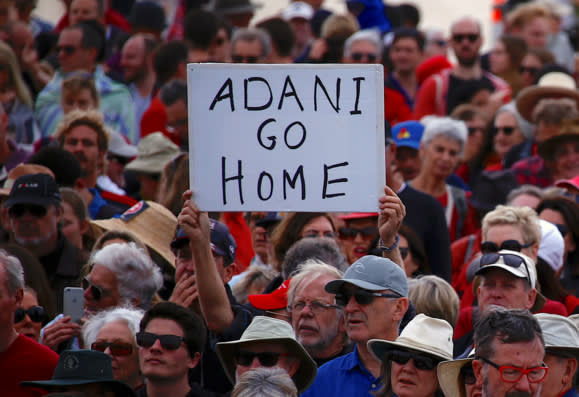 A protester holds a sign as he participates in a national Day of Action against the Indian mining company Adani's planned coal mine project in north-east Australia, at Sydney's Bondi Beach in Australia on Oct. 7.   © Reuters

Opponents of the mine have pounced on the fact that each of Australia's four major banks have declined to invest in the project, leading to suggestions that the government may have to step in with financing.

The loudest objection of all, though, has been the mine's anticipated contribution to climate change -- which has already been blamed for causing unprecedented damage to the Great Barrier Reef, Australia's greatest natural wonder and the source of billions of dollars in tourism revenue.

Earlier this year, scientists announced that two-thirds of the 2,300 km reef had suffered severe coral bleaching due to warming ocean temperatures. The Australia Institute, a left-leaning think-tank, has estimated that the burning of coal from the Carmichael mine alone will generate an additional 79 million tons of CO2 each year, or 20 percent more than the annual emissions of New York City.

Although coal burnt in India would not be counted toward Australia's emissions, critics say the government is violating the spirit of its commitments under the Paris climate accord -- targets it is already on track to miss, according to the country's chief scientist.

"We now know, as scientists have told us, that we simply cannot allow new large-scale coal, oil, gas," Blair Palese, the CEO of environmental advocacy group 350, told The Nikkei Asian Review. "The size of this project alone would have an impact on the global climate. It's not just another mine."

On Oct. 7, thousands of protestors gathered at dozens of locations around the country, including in Sydney, Melbourne and Brisbane, for a "national day of action" against the mine. The rallies came just days after the Australian Broadcasting Corporation, the national broadcaster, aired an expose alleging cases of bribery, corruption and environmental degradation by Adani Mining in India, its home country.

We now know, as scientists have told us, that we simply cannot allow new large-scale coal, oil, gas.

In a sign of growing public concern over the project, a ReachTel poll issued on Oct. 8 found that 44% of Australians opposed the mine, compared to 30% in favor.

"It says a lot about the absurdity of this mine and how easy it is to understand why it's such a bad idea that people have latched onto it as a clear kind of line in the sand project about climate," said Palese.

Despite the growing opposition, state and federal authorities have insisted that Australians have nothing to fear from the development.

"The project has met all commonwealth and state environmental requirements to date," a spokesman for the Coordinator-General at Queensland's Department of State Development told the Nikkei Asian Review. "For the Carmichael coal mine and rail project, almost 270 conditions have been placed on the project to protect the natural environment and the interests of landholders and traditional owners."

With numerous legal hurdles cleared, Adani has signaled it will begin work on the rail portion of the project within days. Nevertheless, opponents of the mine aren't backing down.

"If we can't stop it in the parliament, we'll stop it by standing in front of those bulldozers," vowed Richard Di Natale, the leader of the Australian Greens, the country's third-largest party, on October 15. "It won't go ahead."