The Reserve Bank of India, the country's central bank, has taken steps to increase the flow of funds to the financial sector as it battles a slowing economy.   © Reuters
ROSEMARY MARANDI, Nikkei staff writerSeptember 17, 2019 14:54 JST | India
CopyCopied

MUMBAI -- The Reserve Bank of India has eased limits on bank lending to the country's troubled nonbank sector. The central bank hopes to increase liquidity and fuel consumer demand as economic growth falls to a six-year low.

The central bank increased banks' loan exposure limit to any one nonbank institution to 20% of core capital, up from 15%. The limit can be raised to 25% by bank boards under exceptional circumstances, the Reserve Bank of India said in a recent statement.

The RBI in April revised its guidelines under the Large Exposure Framework, restricting banks' exposure to a single nonbank lender to 15%. Lending limits to entities in the other sectors were set at 20%. The latest change brings the cap on lending to nonbanks in line with that of other industries.

The central bank and the government have been trying to provide more liquidity to nonbank lenders after one, Infrastructure Leasing & Financial Services, defaulted last year. That default spooked lenders, who tightened their purse strings, with ripple effects on consumer credit.

Earlier, the central bank allowed loans to nonbank institutions, which in turn extended credit to "priority" sectors such as agriculture and small businesses. Other government policies aimed at keeping the economy ticking over included offering 100 billion rupees ($1.4 billion) to housing financiers for lending to buyers of low-cost housing. 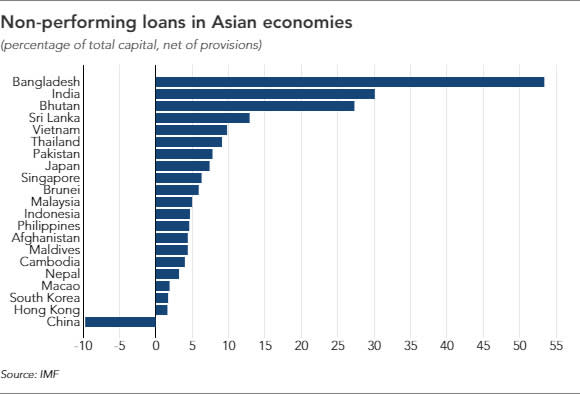 Saswata Guha, a director for financial institutions with Fitch Ratings, is skeptical that the looser limits on lending to nonbanks will lead to significant new flows of credit to the sector. Big banks remain leery because of their own strained balance sheets.

"Banks are being quite cautious at this stage, given the kind of stress [they face], notwithstanding the measures being announced," Guha said, adding that the impact of the change "will not be much because it is one among the several steps that have been announced in recent months, but the liquidity situation has remained tight."

Lending to consumers is likely to remain muted, he said, as consumption tends to slow in line with the broader economy.

India Ratings and Research, a unit of Fitch, cut its forecast of annual lending growth by nonbank entities to consumers for the financial year ending March 2020 to between 10% and 12%, down from its earlier prediction of 15% growth. It cited challenges in funding and the slowing economy in lowering its forecast, blaming "the fall in auto sales, the slowdown in rural infra[structure] activity and small and medium enterprises' challenges."

It believes the measures announced by the government to support the sector will only play out in the medium term.

Problems in the nonbank sector have crimped consumer spending, especially on real estate and cars, as auto lenders have found it harder to raise funds in the credit market. This has forced them to scale back credit to consumers. The slowdown in both sectors has cost tens of thousands of jobs.

India's gross domestic product in the April to June quarter grew 5% on the year, with private consumption rising a modest 3.1%.

The government has responded with a variety of stimulus measures, including reversing a recent tax increase on foreign equity investors and ending an additional levy on startups. Finance Minister Nirmala Sitharaman in August announced a massive consolidation of public-sector banks and an infusion of 700 billion rupees into state-run banks, in hopes of making them more efficient.

On Saturday, the minister also revealed another round of stimulus package with focus on strengthening the housing sector and exports. The package worth 700 billion rupees includes additional 200 billion rupees to housing finance companies. To plug the supply side, the minister set up a special window for expediting housing projects for lower and middle income families.