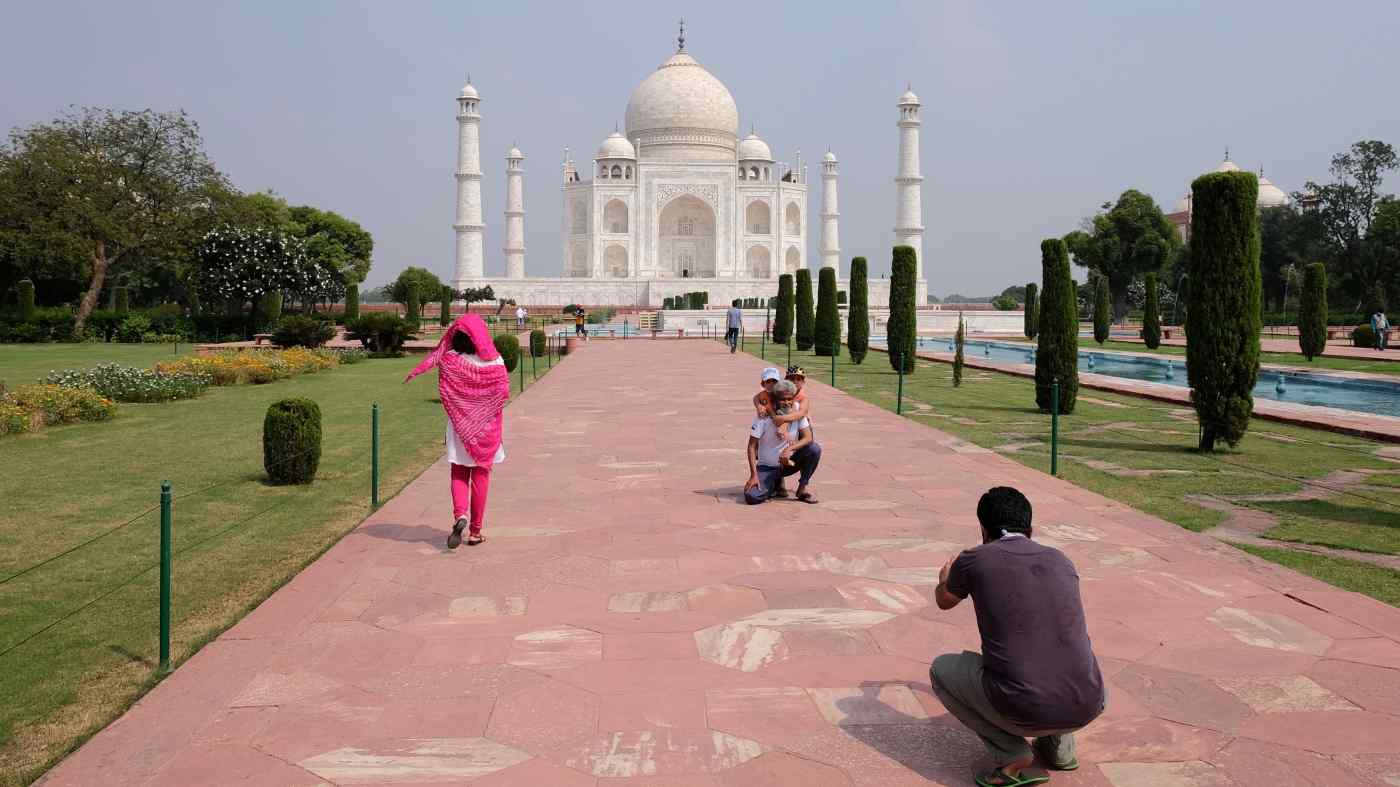 A man and two children have their photograph taken in front of the Taj Mahal after authorities reopened the monument to visitors amid the coronavirus pandemic in Agra, India on Sept. 21.   © Reuters
KIRAN SHARMA, Nikkei staff writerOctober 9, 2020 13:45 JSTUpdated on October 9, 2020 17:28 JST | India
CopyCopied

NEW DELHI -- The Reserve Bank of India, the country's central bank, on Friday forecast that the Indian economy will contract 9.5% in the current fiscal year through March 2021 as the fallout from the coronavirus pandemic severely crimps business activity.

The RBI, meanwhile, kept its key interest rate unchanged at 4% owing to rising retail inflation owing mainly by supply side disruptions triggered by the coronavirus pandemic. A Reuters poll of economists before the announcement had predicted the bank would keep the policy rate on hold.

The decision to maintain the status quo on rates for the second time in a row was taken by the central bank's six-member Monetary Policy Committee headed by RBI Gov. Shaktikanta Das. The MPC was originally slated to gather from Sep. 29 to Oct. 1 but the meeting was rescheduled to Oct. 7-9 due to a delay in the appointment of the panel's three new external members to replace those whose terms expired in August.

The RBI had slashed rates by 115 basis points, or 1.15 percentage points, between February and May in response to the coronavirus pandemic.

For the whole of the current fiscal year, Gov. Das said, India's real, or inflation-adjusted, GDP is expected to decline by 9.5%, with risks tilted to the downside.

The country's economy was already slowing even before the pandemic struck, and its gross domestic product contracted 23.9% year-on-year in April-June, its worst quarter on record. "The Indian economy is entering into a decisive phase in the fight against the pandemic. ... By all indications, the deep contractions of [the first quarter] are behind us [and] silver linings are visible," Das said, pointing to the resumption of construction and rising energy consumption, among other things. He added that economic growth may turn positive by the fourth quarter.

"It looks like the RBI is a little more optimistic. Rightly so, as there are some positive indicators. But at the same time the inflationary pressure appears to be real, and that is one of the reasons why they [decided] to hold [the rates]," N.R. Bhanumurthy, a professor at the National Institute of Public Finance and Policy, told Nikkei Asia.

The RBI's growth forecast also does not come as a surprise, he said. "It's true that real GDP growth would be in a negative territory, but I'm betting on some positive numbers for nominal GDP for the whole of this fiscal year." Nominal GDP is not adjusted for inflation.

"If the government spends all the resources that they [pledged] in the 'Atmanirbhar Bharat' or self-reliant India [economic package] and RBI releases all the credit that [micro, small and medium enterprises] and agriculture sectors are supposed to get, I would like to bet on positive growth for the nominal GDP," he said, without giving a range.

In May, Prime Minister Narendra Modi had unveiled the Atmanirbhar Bharat economic package worth 20 trillion rupees ($265 billion), which is equal to about 10% of the country's GDP, to help the country deal with the fallout from the pandemic.

In September, the Asian Development Bank projected that India's GDP in the current fiscal year will contract 9%, while the Organization for Economic Cooperation and Development expects a contraction of 10.2%.

On Thursday, the World Bank estimated India's GDP will decline 9.6%, a sharp downward revision from its June projection of a 3.2% drop.

India, which has reported over 6.9 million COVID-19 cases so far, imposed a strict nationwide lockdown on Mar. 25 to contain the spread of the pandemic. It has been gradually reopening the economy with lockdown-related restrictions largely eased in many parts of the country, but not in high-risk areas.

India's retail inflation in August stood at 6.69%, which was above the upper end of the RBI's medium-term target range of 4-6% for the fifth straight month, mainly because of supply side issues. The RBI takes the rate into consideration when making policy decisions.

Das said the MPC also decided to continue with the accommodative monetary policy "as long as necessary -- at least during the current financial year and into the next year -- to revive growth on a durable basis and mitigate the impact of COVID-19, while ensuring that inflation remains within the target going forward."