Philippines and Vietnam look like standout performers in coming years

TOKYO -- India and key Association of Southeast Asian Nations members will become increasingly vital drivers of Asian growth over the coming decade, while China's economy slows to a pace comparable with the U.S., new projections from the Japan Center for Economic Research show. The center on Tuesday released its third Medium-Term Asian Economic Forecast for 2017 through 2030. The report, titled "Digital Asia 5.0 -- Innovation changes economic power relationship," puts the Philippines on track to log 6.4% real GDP growth in 2030, with India expected to post a 5.2% rate and Vietnam likely to record 5% expansion that year.

The report gauges countries' growth prospects amid the spread of digital technology, using metrics including labor contributions, investment levels and productivity, which is affected by infrastructure quality and other factors. It offers forecasts for 2017 to 2030 for 11 Asian economies in total: China; India; the Newly Industrializing Economies (NIEs) of South Korea, Taiwan, Hong Kong and Singapore; and the ASEAN5, which covers Indonesia, Thailand, Malaysia, the Philippines and Vietnam. Japan and the U.S. are also included for the sake of comparison.

China's investment ratio to GDP is more than 40%, which stands out compared to its neighbors. The rate is expected to decline by 1 point per year and settle at the mid-20% level by 2030. Although the country's productivity growth rate is high, thanks to infrastructure and educational improvements, capital stock growth is slowing as it reins in production capacity and investment. Among these three countries, India has a relatively large contribution of labor input to GDP growth. The number of people employed in India is increasing as the population expands, and the average length of education, in terms of years, is also increasing rapidly.

Thailand is seeing high productivity growth but lower labor input than Indonesia and Malaysia. The number of employed Thai workers is on a downtrend, though extended education should pick up the slack.

Only Singapore is seeing positive labor input, though in Taiwan, productivity growth is helping to compensate for a decrease in employed workers. 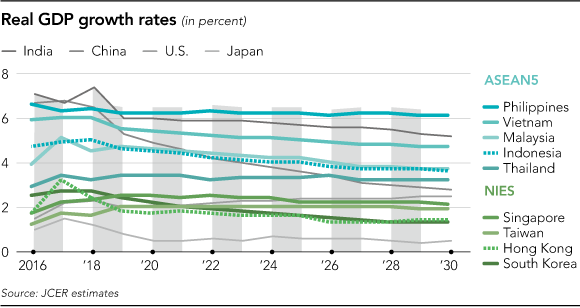 As for Japan, which has the slowest growth rate of the group, labor input is negative and neither productivity nor the capital stock will improve much.

Based on the GDP growth outlook, the report also looks at how economies will stack up in terms of scale (nominal GDP using market dollar conversion) and prosperity (nominal GDP per capita).

China will remain the second-largest economy, well ahead of Japan. China's size advantage over its Asian neighbor will expand from 2.3 times in 2016 to 4.4 times. China is expected to continue accounting for about half of Asia's growth in the coming years.

But in the 2030s, India is likely to be the main driving force for economic growth in Asia. India, whose scale was equivalent to about 50% of Japan in 2016, will pull ahead in 2028 and be 1.2 times larger in 2030. This will make it the world's third-largest economy, up from seventh place now.

There are other looming shifts in economic scale: Indonesia is on track to almost catch South Korea in 2030; the Philippines should overtake Thailand in 2027 and Taiwan in 2029; Malaysia is likely to widen the gap with Singapore; and Vietnam should surpass the city-state in 2027.

In terms of both population and economic performance, Asia's center of gravity will shift from the east to the south -- namely India and ASEAN.

When it comes to prosperity, Malaysia is likely to join the ranks of high-income countries -- with nominal GDP per capita over $12,000 -- in 2023. China should reach that level two years later, but is unlikely to catch Malaysia by 2030. Thailand is likely to fall short of high-income status.

Indonesia is projected to become an upper middle-income country in 2019, with GDP per capita exceeding $4,000. The Philippines should make it in 2022, with Vietnam following in 2028. The Philippines would then overtake Indonesia in 2029.

Despite its high growth rate, India is unlikely to surge into the upper middle-income tier.

Singapore is likely to be the only Asian country to catch up with U.S. prosperity, pulling away from Hong Kong and Japan. Hong Kong should move further ahead of Japan, while South Korea gains ground from behind.