NEW DELHI -- Onion, a crucial ingredient in Indian cuisine, is on everyone's lips these days.

Soaring prices of the vegetable -- which more than doubled in recent weeks after floods damaged crops in many parts of the country -- have alarmed both consumers and sellers.

The onion shortage comes just ahead of key regional polls, including in western Maharashtra, one of the major onion-growing states of India that goes to the polls on Oct. 21. The state of Delhi, where the nation's capital is located, will also hold an election in a few months.

Well aware of the politically sensitive nature of the issue and its impact on state elections, Prime Minister Narendra Modi stopped onion exports.

In a Sept. 29 statement, the government issued an immediate ban on exports until further notice, a move that "is expected to improve domestic availability and cool prices," it said. 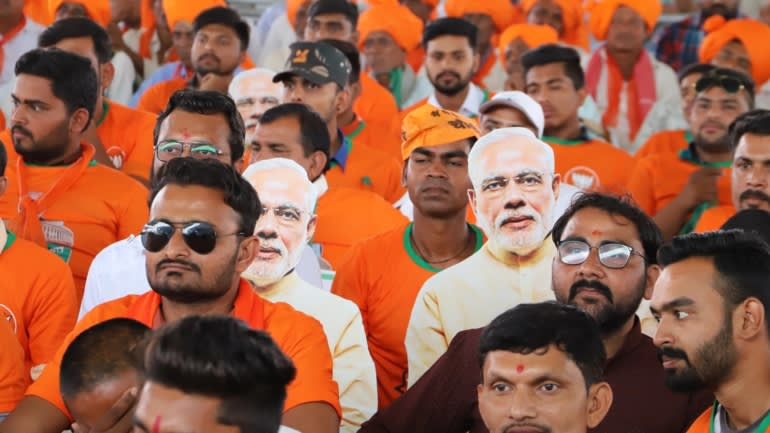 Prime Minister Modi tries to court the farm vote by saying growers of tomatoes, onions and potatoes are his top priority, but critics doubt his sincerity. (Photo by Yuji Kuronuma)

Past Indian governments have collapsed due to high onion prices. In 1998, Modi's Bharatiya Janata Party was booted from power in the nation's capital after prices of the kitchen staple skyrocketed, and has yet to make a comeback. The opposition Indian National Congress ruled the state of Delhi for 15 years until 2013 before being driven from power, due partly to rising onion prices.

Indian consumers are generally more concerned about the rising costs of daily essentials than the overall economic slowdown and rising unemployment. And a spike in the price of onions, which are used in both vegetarian and non-vegetarian Indian curries, has hit them especially hard.

"Onions are in almost everything I cook for my family," says Maheshwari Dongriyal, 42, a homemaker and mother of three. "Now, instead of adding two to three onions per dish, I'm using only one," she adds, pointing out that the vegetable is selling for between 60 and 80 rupees a kilogram as opposed to just 30 rupees a few months ago. "This has disrupted my kitchen budget."

Many low-income earners, meanwhile, have stopped buying the vegetable. "I'm not purchasing onions right now," says Deepak Kumar, an employee at a small New Delhi gift shop. "It's better to have food without onions than spend so much on a single vegetable."

A majority of Indians buy vegetables from roadside vendors, who also complain that buyers are becoming scarce.

Nalku Ram, a street seller outside a temple in New Delhi, bought 100 kg of onions five days ago from a wholesaler for about 4,500 rupees but has yet to unload the entire stock.

"About two to three months ago, when onions were around 30 rupees per kilogram retail, I could sell 200 kg a day. Now, people aren't buying so much," said Ram, who on the evening of Oct. 1 was offering a kilogram of onions for 60 rupees.

Shaligram, a vendor who sells vegetables house to house from a push cart, has the same problem. "I bought 50 kg of onions from wholesalers a couple of days ago and I still have 15 kg left," he said.

The vendor does not blame slow sales on the ongoing nine-day Hindu fasting season, during which many devotees avoid onion and garlic, saying that the situation was the same last month.

Businesses relying on onion supplies have also been hammered. "Our margins have come down to 18% [due to rising prices] from 30%," said Harmeet Singh, who runs a popular eatery serving onion-based Indian delicacies. "Increasing menu prices will only lose customers, and we don't want that."

The problem is not confined to India. Neighboring Bangladesh and Nepal -- both reliant on Indian onions -- are upset as the export ban has caused prices to soar, according to media reports from the countries.

Modi has often spoken about giving growers of tomato, onion and potato top priority in government policy, spinning it into the well-worn acronym TOP used to rally farmers behind him.

Critics, however, say the government is actually more sensitive to ordinary consumers, who form a larger voting bloc than farmers who sell their vegetables to wholesalers and at times can hardly turn a profit.